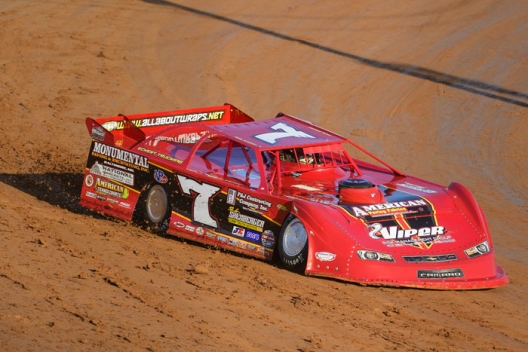 In fact, Eckert left the title-contending duo well alone as he drove to his second series win of the season and series-leading sixth of his career Friday night at Williams Grove Speedway. He earned $4,000 for the win.

Taking the lead on lap 18 from polesitter Gary Stuhler of Greencastle, Pa., Eckert cruised to a convincing victory, winning by 3.009 seconds over Rine, of Danville, Pa. Covert, of York Haven, Pa. — who entered the race with a 10-point series lead over Rine — finished third, nearly 2.54 seconds behind the runner up. Kyle Hardy of Stephens City, Va., used a late race caution to grab fourth from Stuhler, who settled for fifth after pacing the first 17 laps.

Eckert, who struggled early in the night — he finished third in his heat race behind Covert and Gene Knaub— was pleased with a finish that indicated just how hard his team worked throughout the evening.

“Bob worked hard and Timmy and the guy’s with us and Paul’s with us and James (Stephens) from Penske (Shocks) helped us out there,” said Eckert. “I was pretty lost with this car and definitely (it was) a lot better there in the race.”

Eckert stalked Stuhler until he was able to make the pass for the lead as they slipped through traffic. With Stuhler giving Eckert plenty of space on the bottom, Eckert rolled around the hub in turn two to pull even. They raced side-by-side down the long back stretch and Eckert got the edge as they entered turn three.

“The race track was phenomenal,” raved Eckert. “I knew when we got to traffic my teeth were hanging out. I was like, them guys are all stuck in the bottom. You know when you’re not leading you can move around, and I could move around. My car was pretty maneuverable. I got to second and the caution came out and I was like, ‘darn.’ But I was able to get by him when we got back to traffic again.”

Eckert, who was never threatened in the second half of the 40-lapper, used the race’s last caution in lap 32 to cool his tires before making a dash to the finish.

“(Rine) was on a little different tire strategy than I was and I was watching the scoreboard to see where he was at,” Eckert said. “Him and the 38 car (Kenny Pettyjohn) was on a little harder tire, which should have been a little better later on in the race. When that last caution come out, I wasn’t that disappointed ‘cause my tires were probably overheating and his were probably gettin’ going pretty good. It was still gonna be elbows up to try to get it … to try to fight it away from me.”

Rine had little for the race leader. After starting sixth, he lost a couple of spots early before making his own charge to the front. Rine worked the topside in turns three and four to catch Covert, and then dove under the series points leader heading toward turn one, where he pulled off the pass for third. He tried the same line for two laps in an effort to pass Stuhler, before finally stepping to the top in turns one and two to take the second spot away.

“The car was real good tonight,” said Rine. “I come off of (turn) four there on the top side and I didn’t see Coleby (Frye) coming up the track and we got together a little bit and the toe’s knocked out and the front wheel’s bent. I just glad to finish second.

“I think we were a little bit harder on tire and I think it might have sealed up there a little bit under that yellow. I didn’t keep it cleaned off and I probably should’ve been. I was abusing the thing pretty hard up on that cushion in (turns) three and four and I didn’t want to overheat it. But (it’s) a learning experience. We don’t come here very often and to run second to Eckert, that’s pretty good.”

Seeking his first Appalachian Mountain Speedweek championship and first series win of the season, Covert, takes a slim points lead into Saturday’s finale at Selinsgrove (Pa.) Speedway. While he would have liked to have had a bit more, he was happy to leave Williams Grove with his third podium finish of the season and with his points lead still in tact.

“We probably didn’t do a very good job on tire choice for my car. But Rick and Jeff were just the class of the field. They did fantastic,” said Covert, who has a pair of third-place finishes to go along with a second, a seventh and an eighth. “It was actually kinda fun to watch them go. I couldn’t go very good. It was actually a fun race watching Gary and Rick race, and then Jeff and I raced there a little bit.

“But we’re consistent. We put two-thirds of a night together. We time trialed good; we heat raced good; we feature raced OK. You’ve got to make all three parts of the night go good. We’ll keep working on it. I’m glad to be here on the frontstretch. I just wish I was up there,” he’d added, gesturing toward the race winner.

Notes: It was Eckert’s sixth career victory at the Mechanicsburg, Pa., oval. “It’s great to win around home. We don’t get to race around home much and the family’s not around a whole lot. It’s really cool to win in front of the grandkids," said Eckert, whose York, Pa., home is about 30 miles from Williams Grove. … When reminded that it was his sixth career victory at the track, Eckert was a little reminiscent. “One of the best races I had here I ran side-by-side with Gary Stuhler when he was in Speedy Hayes’s car and I won that one,” he said. “It’s always fun. Gary’s always the guy to race here. He’s smooth, he’s steady, he gets it done. But tonight was our night.” … Eckert wasn’t the only driver raving about Williams Grove. Covert was as well. “Isn’t it awesome to race at Williams Grove? I just love going around here. Don’t matter if you’re first, 12th, 20th, just going around this place is pretty cool," he said. …  Williams Grove was one of the original tracks on the AMS schedule when the series was founded in ’09 and was on the slate for three straight seasons. Steve Francis (’09), Stuhler (’10) and Hubbard (’11) were the winners. The track hadn’t hosted an AMS race since 2011.