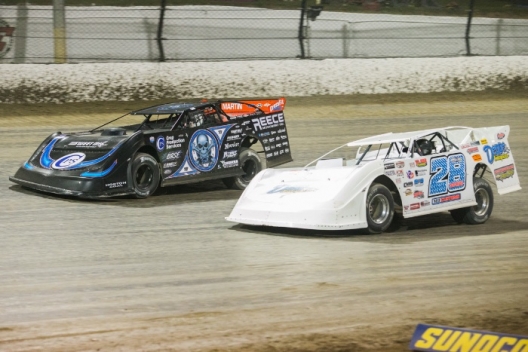 ROSSBURG, Ohio — Scott Bloomquist’s return to Eldora Speedway was, in a word, triumphant.

The six-time Dream winner from Mooresburg, Tenn., hadn’t been back to the historic Ohio oval since he was suspended after last year’s Dream, and it took him only nine laps to find his way back to the front in Thursday’s second 25-lap preliminary feature.

From there, Bloomquist cruised to a $5,000 payday on the first of three nights of racing during the Dream XXIII presented by Ferris Mowers weekend, finishing 3.143 seconds ahead of runner-up Chris Madden of Gray Court, S.C.

Bloomqusit said his 3-race-old Sweet-Bloomquist Race Car was nearly perfect on a slick track that allowed racing all over the surface in a caution-free feature.

“It’s been real good. Randy Sweet’s bunch built this one. We’ve got some fresh metal under us and it seems to be working pretty good,” said Bloomquist, whose most recent Dream victory came in 2013. “We’ve been trying to get our stuff organized and together and built ahead.

“Things are really rolling a bit better for us. It’s easy to get behind if you don’t have a lot of help. We’ve got some good volunteer help this weekend. We’re looking forward to tomorrow and the next day.”

Bloomquist started seventh and wedged his way into an early battle for the lead between Bobby Pierce of Oakwood, Ill., and Jimmy Mars of Menomonie, Wis. With the drivers separated by just two-tenths of second, Bloomquist dispatched of Pierce and then went around Mars to take command four laps before the halfway point.

Mars, who led five of the first nine laps (Pierce led the other four), ended up third while Billy Moyer of Batesville, Ark., was fifth. Dennis Erb Jr. of Carpentersville, Ill., advanced five positions and edged Pierce late for the fifth spot.

Once Bloomquist was out front, no one could keep up with his yin-yang ride.

“The car was superb,” Bloomquist. “There was a very small push there if I got in a little bit slow. It just kept on feeling better and better. We could move around. You couldn’t ask for better.”

Madden got up to fifth early in the race, but he didn’t moved into the second spot until the 20th lap. By then Bloomquist was far ahead of the field.

“We got behind on that first start there,” said Madden, who is looking for his first Eldora victory. “Scott was able to get by four or five cars in the first corner there and I wasn’t able to clear them. We had to clear them through the race and then try to run him back down. But we had an excellent race car tonight.”

Mars stuck with the low groove throughout the race and couldn’t maintain Bloomquist’s pace.

“We didn’t really adjust a lot all night and maybe should have a bit,” said Mars, who started on the pole alongside Pierc3. “But I guess I finished on the same lap as Scott and Chris, so I’ll take that. I’ll take the third and move on to tomorrow night.

“We didn’t qualify so good. We made a bad draw, so there wasn’t a whole lot left in qualifying for us the way the track was. We got a bad draw again tomorrow night. We’ll just hopefully not screw up and come up through there.”

Back in Dream action after giving consideration to making his 2016 appearances at Eldora the last of his distinguished career, Billy Moyer ran away with the first heat. “We’ve not had a real good year so far,” he said. “We’ve been working on some stuff … it feels pretty good.” … Kyle Bronson was an early retiree from Heat 1 after significantly crunching the right-rear bodywork of his car with a slap of the outside wall. … Making his first start in a new XR1 Rocket, veteran R.J. Conley claimed the second heat and immediately looked toward the A-main. “We’ve won a lot of heat races here,” he said. “We’ve got to make something happen in the feature.” … Chris Madden was eyeing his first-ever Eldora win after capturing the third heat. “We had a great good,” he said. “We just keep tuning on it. Maybe we can get us a win here tonight.” … Struggling with his car’s right-rear bodywork bent significantly from an early-race wall brush, Chris Ferguson missed transferring by two spots in Heat 3. … Billy Moyer Jr. slowed on the first lap of Heat 3 when his car’s transmission popped out of gear. He continued and finished sixth. … Scott Bloomquist contemplated how the feature will be won after topping the fourth heat. “The track’s extremely slick,” he said. “We’ll just have to be real smooth.”

Charging around the top side, outside polesitter Brandon Sheppard pulled away from the field in the early running, as Billy Moyer Jr. fought back challenges from Jeep Van Wormer for the third-place spot. A yellow flag waved on lap two when Jerry Bowersock spun on the backstretch. Sheppard held his lead on the restart, with Moyer Jr. pulling ahead of Jackie Boggs to run in second. Sheppard distanced himself from the field to win the consolation, with Boggs edging ahead of Moyer Jr. to run second after a tight side-by-side battle. Moyer Jr. and Van Wormer transferred to the feature.

Outside Kent Robinson jumped into the lead at the outside, but fourth-starting Scott Bloomquist overtook him on the sixth lap and edged away for the victory. Robinson got second with Zack Dohm in third while tail-starting Scott James rallied to finish fourth, one spot ahead of polesitter Nick Latham. Rodney Sanders started sixth and quickly moved into fourth, but he slipped back to seventh at the finish.

Fourth-starting Chris Madden shot to the front of the field to lead the opening lap, as polesitter Billy Moyer Jr. fell off the pace to draw a caution. Using the restart to his advantage, sixth-starting Bobby Pierce charged around the high side to lead lap two, with Madden retaking the lead one lap later. Madden maintained his lead at the halfway mark, as Jimmy Owens worked his way from the final starting spot to run in third. Madden won the heat, with Pierce fighting back Owens’s challenges to finish second. Owens, Shannon Babb and Nick Hoffman transferred to the feature.

Charging around the top side, second-starting Rusty Schlenk led the first lap, nearly colliding with polesitter R.J. Conley as the pair exited turn four on the second circuit. Conley pulled ahead of Schlenk at the line, with fifth-starting Jon Henry working the bottom of the racetrack to challenge for second. Conley won the heat race, with Henry holding off a charging Dennis Erb Jr. to finish second. Erb ran third, with Schlenk slipping back to fourth. Eddie Carrier Jr. rounded out the top five.

With polesitter Kyle Bronson slipping back in turns one and two, fourth-starting Gregg Satterlee pulled ahead of Jeep Van Wormer out of turn four to lead the first lap. Third-starting Billy Moyer took the lead from Satterlee on lap four, as seventh-starting Jimmy Mars worked around the bottom of the racetrack to run in third. Moyer pulled away in the final laps to win the heat race, with Mars edging ahead of Satterlee to finish second at the line. Satterlee, Steve Casebolt, and Babcock al transferred to the main event.

Casey Roberts of Toccoa, Ga., began his quest to make his first Dream headliner since 2010 — when he finished 26th in his only previous start in the 100-lapper — by setting fast time in Thursday’s qualifying session.

“We had a good lap,” Roberts said. “My wife drew an awesome pill (he was one of the first drivers on the track) … that’s what really helped us.”

Gregg Satterlee of Indiana, Pa., returning to Eldora after sitting out last year’s World 100 while serving a suspension for a tire-related disqualification from the 2016 Dream weekend, was second-fastest in time trials. He said he didn’t get any hot laps because an ignition problem hampered his engine, but some quick work by his Robby Allen-led crew corrected the misfire and he then “knocked the fence down and made two pretty good laps.”

Qualifying was rough on Jimmy Owens and Donald McIntosh, both of whom slapped the outside wall between turns three and four and didn’t record a timed lap. ... Owens’s miscue came first and left him limping to the pit area with his car’s right-front suspension broken. His crew immediately went to work rebuilding the right-front corner with new upper- and lower-control arms and other parts and straightening the right-rear bodywork. ... McIntosh’s Blount Motorsports machine sustained almost identical damage as Owens. His team plunged into a scramble to replace the right-front corner’s control arms and the right-rear corner.v“On the warmup lap I got a little loose,” said McIntosh, who is making his third career appearance at Eldora. “Then the next lap I got even higher and hit the wall.” ... Jonathan Davenport also returned to the pit area after time trials with a crunched right-rear spoiler, but he still logged the 13th-fastest lap so he could express a sense of humor about the situation. He claimed that he didn’t get too high on the speedway, quipping, “The track shortened up a little bit.”