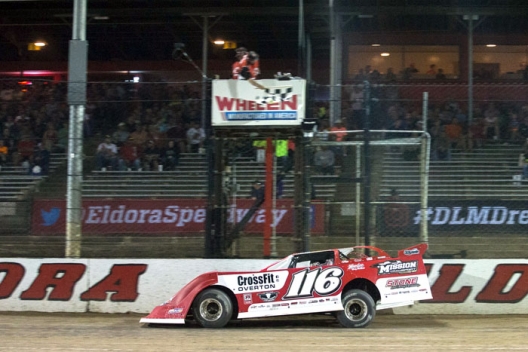 The Evans, Ga., driver who pilots the No. 116 Longhorn Chassis for Dream Team owners Chip Stone and Randy Weaver started outside the front row and led all the way in Thursday’s opening 25-lapper, earning $5,000 and staking a claim toward a good starting spot for Saturday’s $100,000-to-win main event.

Overton turned back challenges from Tim McCreadie of Watertown, N.Y., and then Darrell Lanigan of Union, Ky., to notch his first career victory at the historic half-mile oval.

“I was a nervous wreck out there,” Overton said on the victory stage after earning his ninth victory of the season. “I was watching my guys. Randy and all the guys were telling me where they were making ground at. I was just trying to keep my momentum up. I was a lot quicker than I probably should have been, but I was just letting that thing float around there. First night over here with these guys, I couldn’t be happier.”

Lanigan, who took second with a high-side charge on a late restart, grabbed second while his Clint Bowyer Racing teammate Don O’Neal of Martinsville, Ind., grabbed third on the same restart. Polesitter Shane Clanton of Zebulon, Ga., who lost the second spot on an early restart, ended up fourth and McCreadie, who turned up the heat on Overton amid traffic before a lap-21 caution, was shuffled back to finish fifth.

“It probably wasn’t as easy as it looked, that’s for dang sure,” isaid Overton, who has been fifth or better with four victories in his 11 most recent starts overall. “This is a great way to start the weekend off. I’ve never won at Eldora and it’s a pretty big accomplishment for a guy like me.”

Overton has competed at Eldora in recent seasons, but never before with the Dream Team that has helped him blossom as one of the sport’s best young drivers.

“It’s been a dream come true,” Overton said. “(Weaver) told me when I took this deal, ‘I promise you, you ain’t going to regret it.’ I hope we don’t slow down any time soon.”

Lanigan and Clanton both made high-side charges on late restarts, but Overton was able to keep his challenges at bay.

“That top was pretty good on them restarts,” Lanigan said. “That bottom kind of killed me on that last restart, but it is what it is. We had a pretty good car tonight and we’ll take a second.

“We’ve really turned our program around a lot this year and it shows. We’ve been up front most the raced and had a really good piece. I can’t thank Clint and Casey and all them guys enough.”

O’Neal ran fifth most of the race before flashing into contention during a pair of late restarts.

“I got good restarts before that and got up there to third,” O’Neal said. “The car just wasn’t quite good enough. But everybody’s working hard, we’ve gotten better. We had Clint Bowyer cars in second and third, so that’s a good start for the weekend.”

The feature was slowed three times by caution, none for serious incidents. A lap-four caution appeared when Hudson O’Neal — Don’s 16-year-old son — slapped the wall, causing significant damage to the right-front corner of his No. 71.

A second yellow came out for debris on lap 21, and several cars tangled in turn two on the restart with Steve Francis slowing in turns three and four for the third caution.

Tim McCreadie wasn't completely satisfied with his car’s performance en route to his Heat 1 victory, but he couldn’t complain about it. “I’m not as balanced as I’d to be,” he said, “but when it hits traction, man, it’s good.” … Devin Moran was pleasantly surprised with his march to a convincing Heat 2 triumph. “We actually were just trying some things right there and it worked out pretty good,” he said. … Jonathan Davenport wasn’t dominant as he narrowly beat Shane Clanton in Heat 3, but he looked like a driver who might be primed to grab his long-awaited first Super Late Model feature win of 2017. “We still got a lot of work to do on this hot rod,” he said, “but we’re definitely getting better as we build our notebook.” … Darrell Lanigan liked how his Clint Bowyer Motorsports machine handled the Eldora half-mile in his Heat 4 victory. “The track’s really slick,” he said. “Seems like we can go anywhere on the racetrack … it should be pretty good for the feature.”

Timothy Culp broke away from a side-by-side duel with fellow front-row starter Devin Gilpin and cruised to a 12-lap victory. Jake O'Neil stormed from his ninth starting spot to finish second with Gilpin and Shanon Buckingham getting the final two transfer spots. A lap-two caution appeared for Casey Noonan's 360-degree spin in turn two (Forrest Trent also slowed with a flat tire).

Darrell Lanigan's solid start from outside the front row led to victory while polesitter Brandon Overton settled for second, never close enough to seriously challenge. Dale McDowell finished third just behind Overton while Jason Feger and Chase Junghans got the other two transfer spots. Mike Marlar started outside the second row but struggled after crushing the right-rear corner of his car against the unforgiving Eldora concrete; Marlar finished eighth.

Third-starting Jonathan Davenport went to work early to take the lead, winning a first-lap duel with outside front-row starter Frank Heckenast Jr., while polesitter Ryan King started slowly. Davenport used the high groove to lead the rest of the way, holding off challenges from Heckenast and fifth-starting Shane Clanton. Clanton finished second with Heckenast third while Jacob Hawkins and King were a distant fourth and fifth.

Devin Moran took command early and never looked back, racing to an easy victory over third-starting Chris Simpson. Steve Francis made a daring move on the first lap to grab third while eighth-starting Mason Zeigler grabbed fourth with a backstretch move just before halfway. Polesitter Tim Manville faded to sixth but recovered late in the race to outduel Devin Gilpin for the fifth and final transfer spot.

Casey Roberts of Toccoa, Ga., began his quest to make his first Dream headliner since 2010 — when he finished 26th in his only previous start in the 100-lapper — by setting fast time in Thursday’s qualifying session.

“We had a good lap,” Roberts said. “My wife drew an awesome pill (he was one of the first drivers on the track) … that’s what really helped us.”

Gregg Satterlee of Indiana, Pa., returning to Eldora after sitting out last year’s World 100 while serving a suspension for a tire-related disqualification from the 2016 Dream weekend, was second-fastest in time trials. He said he didn’t get any hot laps because an ignition problem hampered his engine, but some quick work by his Robby Allen-led crew corrected the misfire and he then “knocked the fence down and made two pretty good laps.”

Qualifying was rough on Jimmy Owens and Donald McIntosh, both of whom slapped the outside wall between turns three and four and didn’t record a timed lap. ... Owens’s miscue came first and left him limping to the pit area with his car’s right-front suspension broken. His crew immediately went to work rebuilding the right-front corner with new upper- and lower-control arms and other parts and straightening the right-rear bodywork. .... McIntosh’s Blount Motorsports machine sustained almost identical damage as Owens. His team plunged into a scramble to replace the right-front corner’s control arms and the right-rear corner. “On the warmup lap I got a little loose,” said McIntosh, who is making his third career appearance at Eldora. “Then the next lap I got even higher and hit the wall.” ... Jonathan Davenport also returned to the pit area after time trials with a crunched right-rear spoiler, but he still logged the 13th-fastest lap so he could express a sense of humor about the situation. He claimed that he didn’t get too high on the speedway, quipping, “The track shortened up a little bit.”