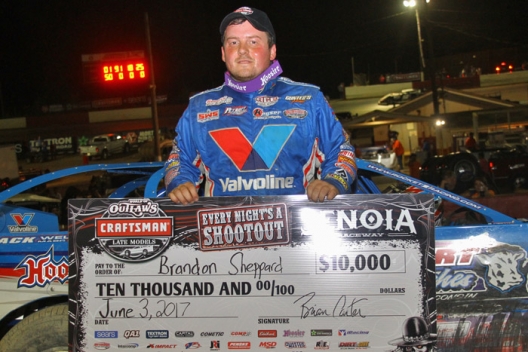 SENOIA, Ga. (June 3) — Brandon Sheppard took on all comers. And he used about as much of the Senoia Raceway surface as he possibly could in the process. Racing all the way from the hub to the outside wall — and everywhere in between — Sheppard, of New Berlin, Ill., turned back Tyler Erb of New Waverly, Texas, to win the World of Outlaws Craftsman Late Model Series-sanctioned Billy Clanton Classic on Saturday.

Tip-toeing through traffic late in the race, Sheppard beat Erb to the finish line by a scant 1.155 seconds for his series-leading fifth victory of the season and the 11th of his career. Erb recorded his fifth top-five finish of the season, while Eric Wells of Hazard, Ky., finished third and Shane Clanton of Zebulon, Ga., finished fourth. Chris Madden of Gray Court, S.C., who started 19th after breaking a driveshaft in his heat race, rallied though the field, salvaging the night with a fifth-place finish.

It marked Sheppard’s first trip to Senoia, but he proved up to the task on the slippery surface in central Georgia. While he preferred the long way around, Sheppard put his Rocket Chassis house car where it needed to go, sometimes skipping along the bumpy terrain near the inside wall and other times sliding all the way up beyond the skimpy cushion, giving the outside wall the occasional tap.

Twenty-two cars were still running at the finish, with 17 still on the lead lap. They often determined which line the leader chose as he stayed just in front of Erb and Wells.

“It was some tough racing out there. The lapped traffic was tricky,” said Sheppard. “If you hit the top just right, it was awesome and you couldn’t hardly move off of it and be fast. Congratulations to Turbo (Tyler Erb). He raced me hard and we had a lot of … I think we had a lot of fun out there anyway.”

Sheppard and Erb traded sliders early in the main event with Erb unofficially taking the lead with a crossover move as they exited turn two. Sheppard answered in turn three, however. Pinching his car down as Erb slid up the track, Sheppard shot back into the lead as pair battled amidst lapped cars. Erb stayed with striking distance throughout, but Sheppard was simply too good with a clear track in front of him.

“We were pretty good,” said Erb. “I couldn’t get off the top pretty much. I’d try when (Eric) Wells would pull up underneath me. I pretty much had to be committed up there. I just hated to see all them cautions. Every time we’d catch lapped cars is when I could really … Brandon would have to start moving around off that top and I might’ve had a shot, but that was everything I had so we’ll just have to come back next year and try it again.

“I’m not much for the slick, but (the track) races really well and you can’t beat it when the lapped cars are sliding around and the leader’s sliding around like that. It was a great race from where I was at and I hope everyone here had a great night.”

Wells, who, like Erb, collected his fifth top-five finish of the season, had a chance at Sheppard on a restart just past the halfway point. Diving to the inside as the leader slid high toward the turn two wall, Wells nosed even with Sheppard, but Sheppard’s momentum propelled him back into the lead. A few laps later, Sheppard found the ripples on the bottom lane in turn two, upsetting his car. Erb and Wells closed in, but again, Sheppard proved too tough to pass.

Notes: Sheppard’s 11th career WoO victory moves him all alone into 13th on the all-time series list, breaking a four-way tie with Jimmy Owens of Newport, Tenn., Dale McDowell, Chickamauga, Ga., and Chris Madden, Gray Court, S.C. … Clanton won the two previous Billy Clanton Classics, a race that honors his late father, a well-known racer who competed at Senoia. … Owens piloted Tod Darda's No. 91 Longhorn Chassis Saturday instead of his usual No. 20 Rocket Chassis. Motor issues in hot laps prevented Owens from qualifying and forced him to the tail of a heat race. He would transfer to the feature from the B-Main and finished 14th. ... Sheppard was pleased with the performance of his Rocket car making just its second start. “This was a new car this weekend. It’s only got one other night on it,” he said. “I think Mark (Richards) was a little skeptical on running it, but I think it’s just as good. It’s nice to know that we have a piece that can win, you know, or a couple them that can win.” … Eric Wells was among those raving about Senoia’s racy surface. “This is more the kinda tracks we like,” he said. “I told my crew guys it’s too bad we don’t live in Atlanta. We’d race every class this place has here weekly. I had a lot of fun. I love this place. It was really racy. I had a lot of fun out there racing tonight and I hope we get to come back again.”