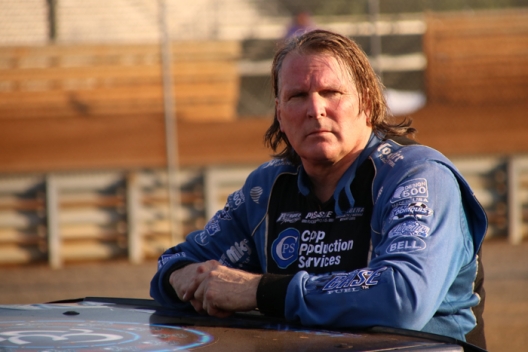 JAMAICA, Va. (June 3) — Scott Bloomquist launched into the lead at the start of the USA 100. On every restart after every caution, he did the exact same thing. Bloomquist, of Mooresburg, Tenn., continued his mastery of the USA 100 at Virginia Motor Speedway, becoming the first four-time winner of the event while collecting his first career victory on the Ultimate Southeast Series. His win Saturday evening was worth $20,000.

Bloomquist was never challenged in leading all 60 laps after starting from the pole. He won ahead of Earl Pearson Jr. of Jacksonville, Fla., and Dale McDowell of Chickamauga, Ga., who made contact on the final lap as the pair battled for the runner-up spot. Tyler Millwood of Kingston, Ga., finished fourth, with Kenny Moreland of Waldorf, Md., rallying from deep in the field to finish fifth.

Despite an engine that sounded a bit sour on the long straightaways at VMS, Bloomquist cruised to the win, topping Pearson by a comfortable 4.207 seconds.

“I think we must have lost a plug wire or something because I was on seven (cylinders) the last 40 laps,” said Bloomqusit. “I was just watching the gauges. Everything looked fine so we didn’t worry about it.

“Later the track started to get a little bit slicked off and even with seven (cylinders) we could still spin off the corner if we wanted to. It did make the car hook up a little bit easier; it just didn’t have quite the same straightaway speed. All in all, Andy Durham builds a great engine. Everything held together and everything’s good to go.”

Bloomquist controlled the race from the first green. Four cautions slowed the race, with the final yellow flag waving on lap 18. Fortunately for Bloomquist, he was never forced to restart the race with his car down a cylinder.

“The car took off right from the start. It was good in the heat race. It’s been good ever since we got here,” he said. “I think we might have burned up a spark plug wire when we lost the cylinder, but the car was still fast, and those seven cylinders left gave all of the traction I needed.”

While the leader kept his momentum rolling at the head of the field, the second position was up for grabs throughout the race. Both Pearson and McDowell slipped backwards early in the race before rallying back for their podium finishes. They were both aiming for second on the white flag lap when they made contact on the backstretch, which resulted in McDowell tagging the guardrail.

“We was in a struggle there running second,” said Person. “Me and Dale got together there on the back straightaway and I know he’s upset, but we don’t drive like that with each other. Like I said, we was in a struggle there. We just stayed around the bottom and that’s all I could do. I couldn’t move around; I couldn’t do anything. To come home here second, we feel good about that.”

McDowell wasn't as immediately forgiving. Not only was there a $5,000 difference between second and third at the pay window, McDowell’s crew will have to spend a few extra hours repairing the minor damage sustained when he tagged the steal guardrail.

“I felt like we had a pretty good shot a second and we ran out of real estate there on the last lap,” McDowell said. “We’ll just chalk that one up as a racing deal and put it on the dash and try to remember it. The car was OK. We needed a little bit more traction up off the corner on stop and go. So, it was a good night. I hate we tore the car up there on the last lap, for the boys getting ready to go to Eldora.”

Notes: While it was Bloomquist’s first career Ultimate Southeast Series wins, it was also his first-ever Ultimate Battle of the Bluegrass Series victory, as the race was co-sanctioned by the sister series. … Sweeping the night’s action convincing fashion, Bloomquist was especially happy with the way his car handled after setting the overall fast time and winning his heat race. “It’s the second run on this car. I think we need to start on another one,” he quipped. “You always need a spare. You never know what can happen out here.” … Jonathan Davenport’s subpar season continued. Davenport of Blairsville, Ga., was running in the top five when he slowed after dropping a driveshaft. He retired to the infield. He was credited with 19th place. … With his fourth-place finish, combined with Davenport’s 19th, Tyler Millwood of Kingston, Ga., took over the Ultimate Southeast points lead. Millwood is also the leading Autolite/Fram/DirtOnDirt.com Rookie of the Year contender. … Four cautions slowed the event: Ross Bailes of Clover, S.C., spun in turn four to bring out the first yellow, forcing a complete restart. Austin Hubbard of Seaford, Del., drew a caution on lap seven. Jackie Boggs of Grayson, Ky., spun to bring out the third yellow. Davenport’s trouble on lap 18 drew the final caution. … Gregg Satterlee had a top-five run come to an end when he slowed and pulled to the infield. He finished 21st.