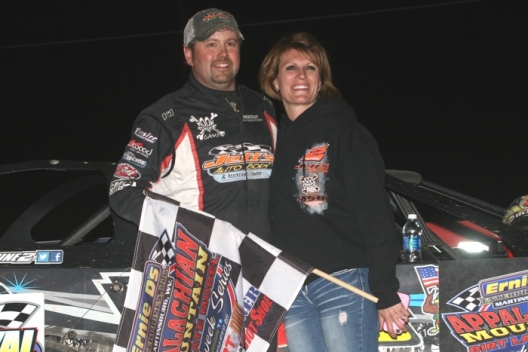 Rine, 39, of Danville, Pa., has won races that paid more than the $4,000 top prize he collected at the half-mile fairgrounds oval, but the first-place check wasn’t his primary concern. More significant to the veteran driver was the fact that he finally captured his first-ever points-paying AMS race and it was forged on a racing surface that usually isn’t his forte.

Plus, the triumph came 24 hours after heartbreaking misfortune cost him a shot at an AMS checkered flag at Bedford (Pa.) Speedway.

“It feels awesome,” Rine said after vaulting from third to first on lap 14 and controlling the remainder of the distance. “We won a lot of big races at Selinsgrove (Speedway where he is a 12-time Dirt Late Model champion), like them Paul Long Memorial races, but this one here about tops it.

“This is probably one of the first races that we’ve won on a black-slick, no-traction type of track, and it feels good. We’re slowly getting better. Jim Stevens at Penske (Racing Shocks) and Matt (Langston) at Longhorn (Chassis) have been helping me so much and it showed tonight.”

Rine was never seriously challenged once he gained command by surging off the inside of turn four to overtake Kyle Hardy of Stephens City, Va., and race-long pacesetter Coleby Frye of Dover, Pa., in one fell swoop. He glided away from the pack in his Jeff Kurtz-owned Longhorn Race Car after the race’s second and final caution flag flew on lap 28 for Hardy, who relinquished second place due to a blown right-rear tire.

How dominant was Rine during the final 12-lap sprint to close the A-main? He crossed the finish line 6.139 seconds — a full straightaway — ahead of York Haven, Pa.’s Jason Covert, who inherited the runner-up spot with Hardy’s bad luck and spent the remaining distance fighting off Mason Zeigler of Chalk Hill, Pa., and a late-charging Kenny Pettyjohn of Millsboro, Del.

Zeigler, who started seventh but fell outside the top 10 at the initial green flag, rallied to finish third. Pettyjohn, the defending AMS champion, earned hard-charger status by advancing from the 16th starting spot to place fourth and the polesitting Frye faded to a fifth-place finish as he struggled with an incorrect tire choice.

Rine, who started fourth, gained a dose of redemption after his disappointing Friday-night outing at Bedford. Driving his regular Bedford ride fielded by the Elbin family, he passed eventual winner Walker Arthur of Forest, Va., for the lead on lap 12 only to slow moments later with a flat tire and ultimately retire early due to engine trouble.

Nothing slowed Rine at Port Royal. He flexed his muscle with his powerful explosion into the top spot and never looked back.

“We were in lapped traffic and they were all over,” Rine said of his move to overtake Hardy and Frye. “I just rolled that bottom trying to make it work and stay in clear air — because the air affects these cars so much — and I think they were on a little bit different tire combination than we were. I felt like I kept getting better.

“I was a little concerned about the tires sealing over (during caution periods), but I tried to keep ‘em cleaned off and a little bit of heat in ‘em so they would refire,” he added. “It all worked out.”

Rine won for the second time in 2017 at Port Royal, a track he’s frequented more often this season after deciding not to commit to regular action at Selinsgrove on Saturday nights. He felt good about his chances entering the AMS event.

“The thing is, we’re really good at Bedford and we’ve been really good here,” said Rine, who owns 15 career victories at Port Royal. “I have a lot of confidence in my car, my team and myself. I just feel really comfortable right now.”

Covert, 46, needed 18 laps to hustle from the sixth starting spot to third in a 1-week-old Cameron-Mann Motorsports XR1 Rocket and ran second for the final 18 circuits — save a brief moment on a lap-28 restart when Zeigler slid ahead of him through turns one and two — but he didn’t have the speed to threaten Rine in the closing stages.

“After that last yellow, I don’t know if I sealed a tire up or not,” said Covert, who won Port Royal’s 2017 season opener in March. “This is a place where you can go and come on tires on yellows. We were going better on that middle run, and then that last 10 laps I just couldn’t steer no more. I don’t know if it’s going flat or if it’s sealed.

“But Jeff, he was fantastic on that last run. In clean air like that, he had it going.”

Covert spent the final laps dueling for second with the 24-year-old Zeigler, who was behind the wheel of his family-owned XR1 Rocket. The tight racing between the two left both drivers a bit agitated after the race.

“On the restarts, Covert couldn’t decide whether he wanted the top or bottom,” said Zeigler, whose tumble backward at the feature’s initial start resulted from his car’s used tires not firing immediately. “He’d choose the top and he’d drive across my nose going to the bottom at the flagstand, and if he chose the bottom he was driving across my nose at the flagstand for the top. It was like, does he want the bottom or top?

“Then I knocked the damn spoiler off coming off four about 30 laps in. I just couldn’t get going … I wore my stuff out trying to fight with Covert.”

“Absolutely,” said Covert, who left Port Royal leading the AMS points standings. “When he goes down there and parks in front of me on a restart (the lap-28 green flag when Zeigler slid Covert through turns one and two), I’m gonna come across his nose. That’s racing. You wanna go have tea and crumpets, or we gonna race? I wouldn’t have had a problem if he didn’t do it first.”

The first of the race’s two caution flags was triggered on lap 22 by Jared Miley of Pittsburgh, Pa., who spun between turns three and four while running sixth.

Hardy, 24, slowed on lap 28 to bring out the second caution flag. His 4-race-old XR1 Rocket fielded by Shawn Martin and Pancho Lawler was struck by an unusual type of flat tire — not worn-out or apparently cut rubber, but the right-rear tire seemed to lose its air after the tread along the inside of the shoe peeled off the cords.

“You really don’t know what’s gonna happen, but the car was good,” Hardy said. “I was able to run the top, and that’s where I was gonna have to pass (Rine) back."

Notes: With Rine becoming the fourth different victor in as many AMS events, the tour has not seen a repeat winner in 14 consecutive races dating back to June 1, 2014. … Pettyjohn was pleased with his 12-position gain in the feature. “To start that deep in the field and finish fourth, we had our car pretty good,” said Pettyjohn, whose last action before the AMS events was during Georgia-Florida Speedweeks in February. … Frye nipped Dan Stone of Thompson, Pa., for fifth place at the finish line by a nose. … Jim Yoder of Selinsgrove, Pa., was behind the wheel of Larry Baer’s car, racing as a teammate to Coleby Frye. ... A new addition to AMS action was Keith Barbara of South Park, Pa., who failed to qualify. … Rick Singleton of Hesston, Pa., started the feature thanks to a provisional after he hit the wall between turns one and two in his heat and was towed off. His machine had undergone extensive frame-rail repairs on Friday at Frye’s shop after it was damaged in a heat-race accident on Thursday night at Susquehanna Speedway in Newberrytown, Pa. ... Walker Arthur appeared primed to continue following the AMS — rather than leave the tour to run Saturday's Ultimate Southeast-sanctioned USA 100 at Virginia Motor Speedway — after winning Friday night's feature at Bedford. But he discovered metal shavings in his car's oberg filter after the race, forcing him to park his Super Late Model and drop off off the AMS. He went to VMS on Saturday night but raced only in the Crate Late Model division. ... Austin Hubbard of Seaford, Del., was third in the AMS points entering Port Royal but he was absent because he opted to compte at VMS.