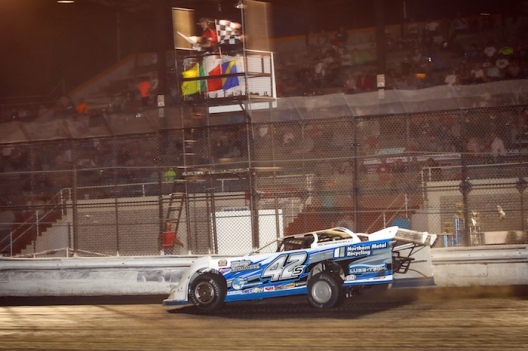 HURON, S.D. (June 3) — Don Shaw may want to petition the WISSOTA Shaw Trucking Challenge Series to schedule more races at Dakota State Fair Speedway. Shaw, of Ham Lake, Minn., drove to his third straight win — and second in the last three days — at the track as he won the 27th running of the Prostrollo's Challenge Cup on Saturday night. Shaw earned $10,000 for the win just two days after claiming a $5,000 victory at the track in eastern South Dakota.

“I think it’s just a momentum track and you gotta keep your car straight here and just moving forward without sliding it,” said Shaw. “It has paid me dividends huge here,” he added with a smile.

Shaw won the race ahead of Kent Arment of Aberdeen, S.D., and Chad Mahder of Eau Claire, Wis. Lance Matthees of Winona. Minn., and Steve Laursen of Cumberland, Wis., completed the top five. The winner may or may not have led all 40 laps around the sweeping 3/8th-mile oval, however.

Midway through the race Arment managed to grab the lead on the back straightaway, even stretching it to two lengths as the headed into turn three. Catching the lapped cars of Rick Hanestad and Curt Kranz running side by side in turn two, Shaw clung to the hub while Arment used a full head of steam and charged around the outside. Arment took the lead going down the backstretch, but still had Hanestad and Kranz directly in front of him. Slowing slightly for the pair of back markers, Arment allowed Shaw to pull even at the exit of turn four.

By the time they reached the frontstretch — where the race is officially scored — the two were dead even again. Shaw then drove hard into turn one, slipping under Hanestad, while reclaiming the lead. He made contact with Kranz on the frontstretch and gained some separation from Arment. When Arment charged into turn one and slipped over the inside berm, Shaw stretched his lead even more.

“I knew Kent would be there. He’s a man that’s up on the wheel,” said Shaw. “I don’t care if it’s the last lap or the first lap. I just knew I had to be on it right off the get-go. He ran me clean the whole race. I got underneath a lapped car and got held up a little. He got the lead for a half lap or whatever there and I got it back. At the end there I kinda just laid it all out and drove it as hard as I could.”

Over the next five laps Shaw pulled away, winning by a half a straight.

“The car’s been on,” he said. “We got a different motor package in and I don’t think I have as much power as my usual WISSOTA motor, but it’s the open motor with the restrictor plate. It drives so nice. It’s unbelievable. The power that this thing puts out, that (engine builder) Vic (Hill) provides me every week is just unbelievable. Whether it’s WISSOTA or the open motor, it doesn’t matter. And these cars, the (Billy Moyer) Victory cars are just awesome.”