Information provided by: Series and track reports (last updated June 3, 9:09 am)
Clanton leads all 50 laps for $10,000 at Tazewell 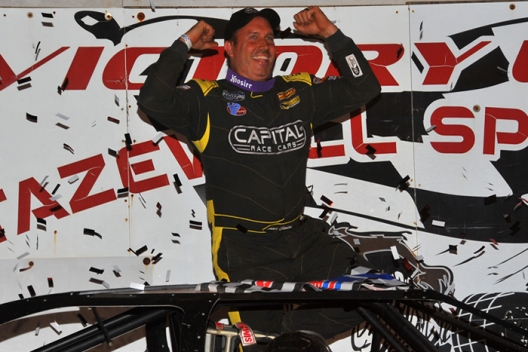 Clanton, 41, of Zebulon, Ga., won his third World of Outlaws Craftsman Late Model Series main event of the season, capturing a a 50-lap, $10,000 victory at the high-banked East Tennessee speedplant in near record fashion.

Clanton’s blistering pace was just 18 seconds short of the 5-year-old record for a 50-lap race set by Bub McCool of Vickburg, Miss. McCool outran Scott Bloomquist on April 28, 2012 in a World of Outlaws-sanctioned race that lasted just 10:30.

Blasting into the lead from the outside front row, Clanton quickly left Weiss, the polesitter, to deal with Devin Moran and Chris Madden. After starting sixth, it didn’t take Owens long, however, to enter the fray as well. Owens, who won a Lucas Oil-sanctioned race at Tazewell on May 7, has become a master of the ultra-fast bullring.  But he had little for Clanton on Friday. He was able to close the deficit slightly as they raced through lapped traffic, but never managed to get close enough seriously threaten the leader.

“We had an awesome car tonight,” said Owens. “The track just kinda locked down a little quicker than we needed it to. I’d like to have seen what we had for Shane if we could’ve raced a little more, but he had a good car. He won his heat race. He’s been good for awhile. Congratulations to him and his crew, and I’m glad that we came home with a good second-place finish.”

Clanton simply had to remain smooth in traffic. He caught Vic Hill, but seemed content to ride there without pressing the issue.

“Lapped cars was treacherous there running two and three wide,” said Clanton. “I was just biding my time … just waiting, waiting, waiting for the checkered flag to come out.”

He didn’t have to wait very long to register his 40th career World of Outlaws victory. Patiently dispatching cars one at a time, Clanton eased around the third-mile oval with relative ease.

“Our car’s been running real good the past month,” said Clanton. “Everyone, my whole crew, all the guys have been working real hard.”

Third-place finisher Weiss started from the pole and was shuffled back a bit in the early going. He rallied, however, to grab a podium finish and was happy to do so.

“To be up here behind these guys, I just can’t get a grin off my face,” said Weiss.

Notes: Chris Madden finished in front of Brandon Sheppard, but barely made a dent in the series leader’s points lead. … Devin Moran backed up last week’s win and runner-up finish with a solid seventh-place run. … The series moves to Clanton’s home track of Senoia, Ga., on Saturday for the third-annual Billy Clanton Classic, a race that honors Clanton’s late father, who was a well-known racer in the area. Clanton has won the race twice. … Clanton’s three WoO wins this season have come in three different states: Florida, South Carolina and Tennessee.