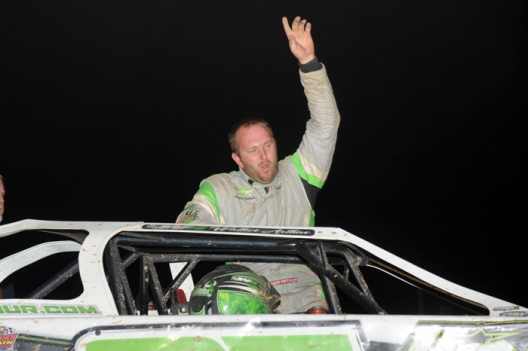 “This is awesome,” Arthur proclaimed repeatedly after collecting $5,000 for his first-ever AMS triumph. “This is probably the specialist Late Model win that I’ve got. To come away from home, away from an area we’re familiar with and be able to run this good, it’s pretty awesome.”

Arthur, 32, was almost perfect in Round 3 of the miniseries, taking advantage of an outside pole starting spot to lead all but one lap of the A-main. He ceded the point to Jeff Rine of Danville, Pa., on lap 12, but the top spot was handed back to him on that same circuit when Rine slowed with a cut tire to bring out the race’s lone caution flag.

The remainder of the distance belong to Arthur, who kept his family-owned Longhorn Race Car out front in the face of regular pressure from Austin Hubbard of Seaford, Del. Arthur’s final margin of victory was a small but oh-so-sweet 0.849 of a second over the XR1 Rocket driven by the 25-year-old Hubbard, who won the 2015 AMS event at Bedford.

Kyle Hardy of Stephens City, Va., finished third in his third start behind the wheel of a new XR1 Rocket fielded by Shawn Martin and Pancho Lawler. He ended up on the podium for the first time on this year’s AMS with a burst from fifth to third over the final four circuits.

Completing the top five was Jared Miley of Pittsburgh, Pa., in fourth after starting eighth and Andy Haus of Hamburg, Pa., in fifth.

Mike Pegher Jr. of Cranberry Township, Pa., ran at the back end of the top five for most of the distance before slipping to sixth in the final rundown.

Arthur, who began the AMS with finishes of seventh on Wednesday at Hagerstown (Md.) Speedway and ninth on Thursday at Susquehanna Speedway in Newberrytown, Pa., was strong from start-to-finish in a feature for the first time at Bedford. He credited fellow racer Keith Jackson of Martinsburg, W.Va., for some pre-race guidance that made his success possible.

“He gave me a last-second tire deal there,” Arthur said of Jackson. “It worked out perfect, got me out front on the start I think. I slipped up and made a bad decision in traffic (on lap 12) and was lucky (to regain command). I’m not sure if Jeff (Rine) broke or what happened.”

Given new life with his elevation back to the lead, Arthur refused to relinquish the spot. Hubbard was able to draw close to Arthur several times over the final 28-lap run to the checkered flag, but Arthur hung tough to turn back the First State racer.

“The adrenalin got going there at the end,” said Arthur, whose first-place payoff was pumped up an extra $1,000 from the base AMS purse in memory of late race fan Gigs Foor. “I knew they were gonna be right behind me. I was just trying not to make any mistakes behind the lapped cars, and then it got to rubbering pretty good right there at the end.”

Hubbard hailed the performance of Arthur, conceding that the winner simply didn’t leave him any avenue to grab the lead.

“That was a hard race, a game of inches,” said Hubbard, who plans to join Arthur in leaving the AMS trail to enter Saturday night’s Ultimate Southeast-sanctioned USA 100 at Virginia Motor Speedway in Jamaica. “The track’s real slick, you gotta hit your marks. I feel like I’d hit it a couple times and have a bad lap, and there (Arthur would) go again.

“He ran a perfect race. He never made a mistake. He hit his marks. He never bobbled. He got by everybody he needed to. He drove a helluva race. You can’t take anything from him. We were just a second-place car tonight.”

Hardy, 24, ran outside the top five for much of the distance before coming on strong in the final circuits.

“When these tracks are pretty aggressive you gotta save your tires to be there at the end,” Hardy said. “The first 20 (laps) I kind of rode there and kept the car straight just to be there at the end. When I seen there was 15 to go I just kind of turned it up a little bit. Maybe I should’ve (run harder) a little bit sooner, but we’re getting there with this car. Hopefully we can get in in victory lane.”

Rine, who started from the pole position in his usual Bedford ride fielded by Bob and Tim Elbin of Woodbury, Pa., restarted at the rear of the field after pitting for a new tire. He climbed back up to 13th before retiring on lap 34 with engine trouble.