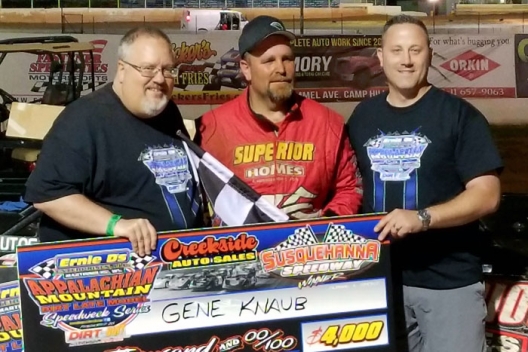 The 48-year-old veteran from Dover, Pa., ran away with the 40-lap Ernie D’s Appalachian Mountain Speedweek feature at Susquehanna Speedway, leading all but one circuit of what was arguably the 4/10-mile oval’s biggest Super Late Model event ever.

With Knaub’s $4,000 victory coming at a track just 10 miles from his home and just minutes after he pocketed $1,300 for capturing the companion 25-lap feature for the limited 358 Late Model division — his 26th career win at Susquehanna — it certainly couldn’t be considered an upset. It could, however, be characterized as an underdog story.

“We’re just a small team with a big heart,” said Knaub, who operates his low-key effort with co-owner Scott LeBarron and his retired buddy Bill Durr.

Taking advantage of a prime outside pole starting spot, Knaub dominated virtually the entire distance. He was nosed out for the lead on lap seven by Jared Miley of Pittsburgh, Pa., but, after regaining command the following circuit, he raced unchallenged the remainder of the distance in his Hershey-powered Black Diamond Race Car.

“I wasn’t expecting that,” Knaub said of Miley’s early pressure. “I just got up on the wheel and got going after he got ahead of me.”

Knaub built a straightaway edge during the race’s longest period of uninterrupted green-flag racing — laps 14-29 — and over the final 11 circuits extended his margin to nearly that length again. Finishing a distant second was polesitter Keith Jackson of Martinsburg, W.Va., who slipped into the runner-up spot on lap 37 when jumped the cushion in turn four.

Jeff Rine of Danville, Pa., finished third after charging past both Miley and defending AMS champion Kenny Pettyjohn of Millsboro, Del., on the final lap. The eighth-starting Pettyjohn placed fourth and Miley, who struggled with a car that became increasingly tight as the race wore on, settled for fifth.

While Knaub has recorded richer Super Late Model victories in a racing career that began three decades ago — most notably, a $6,055 score in 2015 at Bedford (Pa.) Speedway in 2015 and a $6,000 checkered flag in ’14 at Dog Hollow Speedway in Strongstown, Pa. — his first-ever AMS triumph might have been his most personally satisfying success.

“This is probably one of my biggest wins as far as quality of cars,” Knaub said. “They’re all special, but this one means a lot because it’s only 10 minutes from my house. It’s kind of a home track for me. I got a lot of friends and family here.”

Knaub acknowledged that he does “know the line around here,” but he didn’t take a normal route to victory lane in the evening’s headline event.

“The limited (358) car just races so much different here,” Knaub commented. Like, we never race that high here. We were actually over the top of the shelf and leaning the wrong way (in the Super Late Model feature).”

Knaub was hard on the gas for the duration of the A-main — probably too hard, he admitted afterward. He continued to press the issue even when he already had a commanding edge.

“We’re just a little team and I didn’t have a guy telling me how much of a lead I had,” Knaub said. “If I had known I had a big lead like that I wouldn’t have been so aggressive.”

Jackson, 26, certainly didn’t have anything to offer Knaub after he finally gained second place from Miley with three laps remaining. He was simply happy to claim the bridesmaid position with his MasterSbilt by MBH car in his first start of 2017.

“I’ve never been here before, never seen the place, so didn’t really know what it was gonna do to the tires so I kind of laid back for a little while,” said Jackson, who won an AMS feature last year at Hesston (Pa.) Speedway. “Then there at the end I had to give it all that I had … and all I had was seven (cylinders). About halfway through (the feature) a spark plug wire came off.”

The 39-year-old Rine made a strong push in the closing laps to claim a podium finish in his Longhorn car after spending much of the race’s second half battling with Pettyjohn.

“I know them two (Pettyjohn and Miley) had different tires on than we did and my stuff was coming on there the last couple laps,” said Rine, the 2015 AMS champion. “I got a run off of (turn) two (on the last lap) and got down there to the bottom and got through.”

Rine was physically drained after the 40-lapper.

“It was rough,” Rine said. “Running around that cushion like that, it was pretty demanding. We were a little different on tires than I think most of them and I had to get up there just to make up for the difference until we got some heat in ‘em.”

Four caution flags slowed the race. The first came on lap one for a tangle between turns one and two involving Matt Cosner of Ridgeley, W.Va., Hayes Mattern of Beavertown, Pa., and Jason Covert of York Haven, Pa., who rallied to finish eighth. Subsequent cautions flew for Mason Zeigler of Chalk Hill, Pa., who had the engine expire in his Bryan Klinedinst-owned No 43A on lap 10 as he ran in third place; Tyler Hershey of Mercerberg, Pa., who stopped in turn two on lap 14; and Shaun Jones of Shermansdale, Pa., who hit the wall between turns one and two on lap 29.

Notes: Bryan Bernheisel of Jonestown, Pa., reached sixth place from the 11th starting spot on lap 27 and finished there. …  Rick Singleton of Hesston, Pa., complained of a sore left shoulder after he was involved in a multi-car tangle on the opening lap of the first heat. After Jason Covert spun between turns three and four, Singleton took evasive action and was hit hard in the driver's side door by Austin Berry of South Mifflin, Pa. ... Austin Hubbard of Seaford, Del., put on a show in the fourth heat to grab the fifth and final transfer spot. After spinning in turn three while battling Pancho Lawler of Dover, Pa., for fourth on lap five, the First State driver charged around the outside to reach fifth on the final circuit. ... With a four-car invert for the heats, overall fast-timer Jared Miley and fellow group quick-qualifiers G.R. Smith of Cornelius, N.C., Jeff Rine and Kenny Pettyjohn started from the outside of the second row in their prelims. … The AMS miniseries moves on to Bedford (Pa.) Speedway on Friday night.