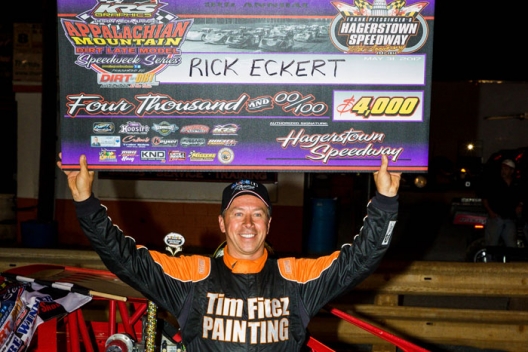 Battling early with polesitter Walker Arthur and then having to regain the lead from Trever Feathers, Eckert eventually dispensed with the competition to earn $4,000 and become the winningest career driver in the miniseries with his fifth victory.

“It wasn’t near that easy,” the third-starting Eckert said, adding that he overcame two poor draws to put himself in position to win. And even when he got out front, he was eager to see the checkers.

“This is one of them places where clean air means a lot, and when you get within about a half-straightaway of lapped cars, your car just totally changes again, you know what I mean?” the 2010 miniseries champion said. “I got close to those lapped cars, and I got to reading the scoreboard, and I’m like, ‘Damn, I hope this thing soon ends.’ ”

Eckert wrapped up the victory over Mason Zeigler of Chalk Hill, Pa., who steered the Bryan Klinedinst-owned No. 43A to a runner-up finish while Jason Covert of York Haven, Pa., gained seven spots to finish third. Feathers, the Winchester, Va., driver who led laps 15-21, was fourth and Jeff Rine of Danville, Pa., fifth after losing a couple of spots on the race’s lone restart. Arthur, of Forest, Va., slipped back to finish seventh.

Eckert’s winning move came shortly after the race’s lone caution at the midpoint when Dylan Yoder rolled to a stop exiting turn two.

“Me and Walker had a heckuva race for the lead. I don’t even know if he knew we were having race. I couldn’t get close enough up to his door; I could get to his quarterpanel,” Eckert said. “And Trever drove by us there. That kid was rolling. He was in that bottom, and I couldn’t run his line. I could get down there, but I couldn’t leave the corner. I had to use momentum. I finally cleared Walker and we got in that traffic, and (Feathers) was mowing ‘em right down and I was having a little trouble.

“Then that caution came out and he got running and pinching way down, and got to just using a lot of the top, you know, and got some momentum going and rolled back around him there. But, yeah, it was a heckuva race. It was fun there for a while. We were about three-wide going into (turn) one there a couple of times. It was fun.”

Praising Klinedinst’s car, Zeigler said he “lacked a little in the seat and maybe a little in tire” in trying to chase down Eckert.

“We tried to snooker ‘em. We went with a little harder tire than (Eckert) did. That caution just killed us,” said Zeigler, who was a half-straightaway behind at the finish. “I thought we had something for ‘em. I was reeling Rick in and I could see (Feathers) out ahead of him …. I was just sort of biding my time waiting.

“And that freaking caution just came out and killed us. That’s how it goes. If we had stayed green, I think we had a car to win. But we made that (tire) decision, and we had to live with it. But we’ll take second.”

“Once we got to where we could get out in the clear air, once we got spread out, I started making up some time on that one long run,” Covert said. “I really felt like we were coming pretty good — they were coming back to me. Then we had that yellow and it took a little bit to get fired off again, and we were able to get by a few of the guys.

“But Rick was out there gone, and Zeigler was pretty good. For us, for what we’ve went through the last month, it was a good month. It’s a credit to all the guys. They’re working so hard and giving me this opportunity.”

Notes: Eckert’s previous AMS victory came in the 2013 finale at Lincoln Speedway in Abbotstown, Pa. … His other miniseries victories came at Port Royal Speedway (2013), Winchester Speedway (2010) and Lincoln (2009). … The top two finishers in each heat redrew for the top 10 starting spots in the 40-lap feature. ... Joining Rick Eckert as group fast qualifiers were Gene Knaub, Walker Arthur, Chad Hollenbeck and Jared Miley. They each started from the outside second row in their heats with a four-car invert. ... Wednesday's 55 entrants were the most on the miniseries since Winchester (Va.) Speedway drew 58 on June 3, 2012.