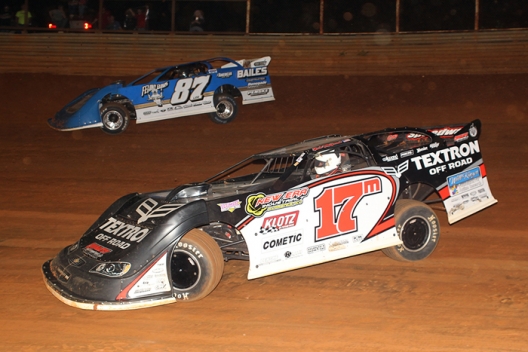 The 51-year-old driver from Chickamauga, Ga., won Sunday’s 50-lap Ultimate Southeast Series event at Volunteer Speedway to collect $10,000 and his third straight touring series victory. McDowell took the lead from polesitter Ross Bailes of Clover, S.C., on the 28th lap and cruised the rest of the way at the 4/10-mile oval.

His victory capped a three-victory stretch that included a pair of Schaeffer Oil Spring Nationals victories at Dixie Speedway in Woodstock, Ga., and Rome (Ga.) Speedway.

Bailes and Overton led the field to green from the front row, with Overton blasting out to lead over Bailes, McDowell, Owens and G.R. Smith. McDowell passed Bailes for second on lap three racing off turn two down the backstretch, while at same time back behind them Jason Welshan got around Smith for the fifth spot.

Welshan worked his way past Owens for fourth place on lap nine as they raced off turn two. With Owens running the high-line and Buckingham down low, Buckingham made the pass for fifth on lap 13 between turns one and two.

The event's first caution flag waved on lap 16, when Travis Greer slowed up high on the track at end of the backstretch.

Off the double-file restart, Overton throttled back up to remain in the lead, but behind him Bailes got the advantage over McDowell to claim second in the running order. At end of the front straightaway on lap 19, Bailes drove in hard on the high-side and rolled around the outside of Overton as they raced off turn two for the lead.

Overton got out of shape between turns one and two on lap 22, which allowed McDowell to drive past him into second place.

The race's second and final caution waved on lap 28 for debris near entrance to the first turn.

Off the restart Bailes jumped the cushion between turns one and two, which allowed McDowell to drive past him into the lead with Overton, Buckingham and Hill in pursuit.

McDowell set a blistering pace the rest of the way while Overton dove inside Bailes on lap 47 to secure the runner-up spot.