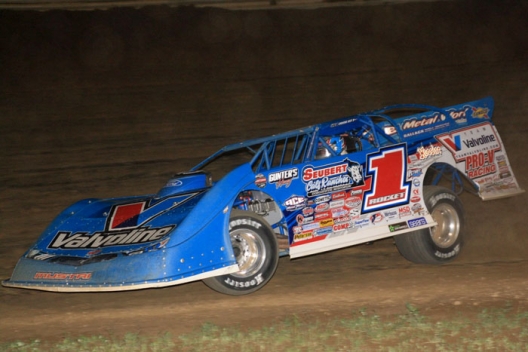 ORRVILLE, Ohio (May 27) — Don’t blame Brandon Sheppard if he couldn’t keep the attention of the fans at NAPA Wayne County Speedway. After all, all the New Berlin, Ill., driver did was run away with the  World of Outlaws Craftsman Late Model Series feature and a $12,500 victory. His fourth series victory of the season and 10th of his career was, well, rather ho hum compared to the stirring run produced by runner up Devin Moran.

Moran of Dresden, Ohio, kept his home-state fans entertained as he motored from his 19th starting spot all the way to second. Taking advantage of a bevy of cautions along the way — a good baker’s dozen of yellow flags slowed the pace around the high speed paper-clipped oval in north central Ohio — Moran marched through the field, picking off fellow competitors one at a time.

After finally closing in on the leader thanks to the 13th and final caution on lap 48, Moran vainly chased Sheppard to the finish, settling for second place ahead of Chris Madden of Gray Court, S.C. Tyler Erb of New Waverly, Texas, finished fourth, with Shane Clanton of Zebulon, Ga., completing the top five.

“We go from not passing a car last night to almost passing the whole field tonight,” said Moran. “Nineteenth to second, we’ll take it and we’ll move on.”

Moran, who was running third in his heat before mechanical trouble forced him pitside, won the consolation race and clearly had one of the fastest cars all night. But 24 hours after capturing his first career World of Outlaws main event at Atomic Speedway near Alma, Ohio, his drive toward a second straight victory stalled after he moved to second.

“I think I just used my tires up some,” Moran added. “Even if I didn’t I don’t think I would have gotten Brandon. Like I said, he was really, really good. Starting that far back, sometimes you’ve got to gas it up when you don’t want to and that overheats the tires. But it is what it is and we came up through there and I was happy.”

Between Moran and back-to-back World of Outlaws wins was a very dominant Sheppard. While the driver of the Rocket Chassis house car obviously had a fast ride, the sixth-starting Sheppard had to be equally patient as he worked by a handful of series veterans at the front.

“I definitely changed my line up quite a bit there at the beginning. Last time I was here it really wasn’t that top dominant of a track especially in (turns) one and two there,” Sheppard said. “I don’t think the track had as much banking as it does now. I just was kinda feeling out the middle and the bottom a little bit. I watched them guys, Chub (Frank) and (Chris) Madden and seen where they were gaining speed and losing speed to me and I just decided what I was going to do and made my move.”

Madden took the lead on lap one and then worked to keep polesitter Dave Hess Jr. and Chub Frank at bay while trying to settle into a rhythm up front. That was difficult, however, as a pair of yellow flags in the first five laps slowed the action. It became a theme. Following a caution for a Brian Shirley spin on lap 13, Sheppard grabbed second from Frank.

He then stalked Madden for the next five laps before making a bid for the lead. Just as he took the point away from Madden, the race’s fourth caution came out. Sheppard was credited with a lead of .094 of a second on lap 19 and he never looked back, not even as Moran was dicing his way through the field. Once in front, Sheppard extended his lead to as much as six seconds, often building advantages of a half straightaway only to see the lead dissipate due to the rash of cautions.

After giving up the lead, Madden, who set a new track record of 16.480 seconds during qualifying, was under heavy fire. Frank, Clanton, Erb and eventually Moran took their shots. Madden slipped back to fifth before bouncing back for a podium finish in his first visit to Wayne County.

“We had a good car on the start of the race and then in the middle of the race we struggled a little bit,” said Madden. “(That’s) probably a little bit of me, not knowing the race track, not knowing where to be. But later on in the race, we had a real good car. It started coming back to us. We just got shuffled around on a restart there and put us back to fifth and we had to work our way back to third. I felt like we had at least a second-place car and could’ve maybe give (Sheppard) a run at the end of the race if we could’ve held our position.”

By the time the 11th caution waved on lap 42, Moran was already in second. But Sheppard easily pulled away on the restart, getting out to a 3.5-second advantage. Action was slowed two more times — on lap 46 and again on lap 48 — but Sheppard had no trouble keeping the hard-charging Moran in check.

“And to top it off I felt like I had a really good car through (turns) three and four where it was slick. I was kinda running a lane or two off the bottom and just washing up, so I can’t ask for a much better car than that.”

Notes: With his 10th World of Outlaws victory, Sheppard moved into a tie with three racing heavyweights: Jimmy Owens of Newport, Tenn., Dale McDowell of Rossville, Ga., and Madden. That put the four drivers tied for 13th on the tour’s all-time win list. They’re still a long way from Josh Richards’s record 76 WoO wins. … All four of Sheppard's 2017 tour victories have come in different states (Mississippi, Illinois, North Carolina and Ohio). … Shane Clanton and Brian Shirley seemed headed for relatively easy heat race runs when the two made contact coming to the checkered flag. Clanton held on for second and the all-important redraw spot, while Shirley spun out of third place and was credited with eighth. Shirley took a series provisional to make the show and rallied to finish seventh the main. Clanton needed to borrow a nosepiece from Frank Heckenast, who also pilots a Capital Race Car, and made repairs for the feature. … Dave Hess Jr., had a solid run slowed when he tagged the wall on the lap-five restart. The third-running Hess lost several spots but bounced back and ran as high as sixth before slipping to 10th at the finish. … Donald Bradsher took a series provisional and retired on the first lap. … Fourth-running Rick Eckert pitted under the yellow on lap 31 with overheating issues. Attempting to finish the race, Eckert’s troubles continued as he slowed to draw a caution on lap 33.