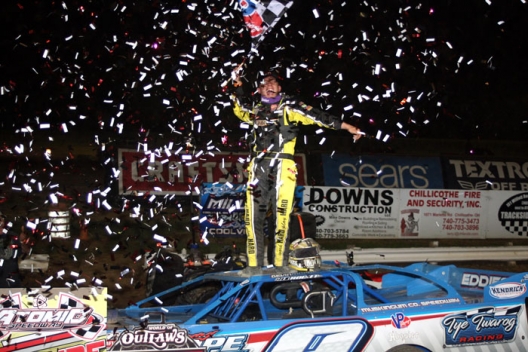 Leading all 50 laps, second-starting Moran turned back early challenges from Frank Heckenast Jr. of Frankfort, Ill., and Brandon Sheppard of New Berlin, Ill, holding off a late-race charge from Steve Casebolt of Richmond, Ind., for a $10,000 payday in his fifth victory of the 2017 season.

“I finally got that first World of Outlaws win with the new team this year,” Moran said in Atomic victory lane. “It’s been not a long time coming, but we’ve been there a couple of times. We finally put it all together tonight, got a good pill draw and you see where we’re standing. It’s awesome.”

Charging around the top side of the racetrack, Moran shot to the lead at the drop of the green flag, approaching the rear of the field by the seventh lap. As the leaders worked their way through lapped traffic, Heckenast began reeling in the race leader, only to have his charge slowed by a caution.

Maintaining his lead, Moran entered lapped traffic again on lap 22. With Heckenast retiring on lap 25, Sheppard inherited the second-place spot, pulling alongside Moran to challenge for the lead when another yellow flag waved on lap 30.

As the race went back green, it was 13th-starting Casebolt using the restart to his advantage, shooting ahead of Sheppard down the backstretch to take over the second-place spot. Casebolt closed in on Moran in the race’s final stages, but it was the second-generation driver pulling ahead at the checkers for his first series victory.

“Right before that one caution, I saw Brandon (Sheppard) underneath of me, so under the whole caution I was like, ‘Man do I go to the bottom in (turns) three and four or do I stay up?’ I stayed committed where I was and I saw the No. 9 was in second and I figured he was probably passing around the top on that restart. Regardless, we got it in the bag. I like standing up here.”

Making his debut with the Indiana-based Jim Beeman Motorsports team, Casebolt was happy with his runner-up finish.

“It came together in a hurry,” Casebolt said of his new partnership. “We put this thing together in a hurry. I worked a couple of long days on it. It’s been a lot of fun working with Tader (Masters). It’s always been a dream of mine. I know how good he is at race cars and I’ve just always wanted to learn from him. I think tonight showed that he isn’t no dummy. Sooner or later hard work’s got to pay off.”

While it was another good points night for Sheppard, who held a solid lead in the Outlaws standings entering the weekend, the Rocket driver thought he could have finished a couple of spots higher.

“I thought I was going to get a good enough run to get up alongside Moran there, but he had a really good car,” Sheppard said. “I probably should have just chose the top. I kind of went out on a limb there trying something. I got passed after that. It’s my fault. I feel like I had a car to win the race, I just needed to be in a couple of different spots a few different times.”

Notes: All five of Moran's 2017 victories have come in Ohio. ... Runner-up Steve Casebolt of Richmond, Ind., made his debut behind the wheel of a Jim Beeman Motorsports MasterSbilt Race Car. ... Winless since Aug. 22, 2009, WoO regular Chub Frank, returned to the site of his most recent series victory (when the track was then known as K-C Raceway) and recorded a fifth-place finish. ... Polesitter Frank Heckenast Jr. ran second for the first half of the race before retiring with mechanical issues. ... A tangle between Tyler Erb and R.J. Conley led to a lap-34 caution when Erb suffered a flat tire; Conley made contact with Erb during the slowdown and was sent pitside. ... Morgan Bagley slowed on lap 30 for a yellow flag; fourth-running Shane Clanton suffered a flat tire under caution and was forced to pit for a change. ... Jackie Boggs slowed to draw a lap-11 caution; Delmas Conley retired along with Boggs. ... Atomic kicked off a three-race holiday weekend for the WoO tour, which also visits NAPA Wayne County Speedway on Saturday and Tyler County Speedway on Sunday. ... Rod Conley of Wheelersburg, Ohio, currently leads Atomic's weekly Late Model point standings.