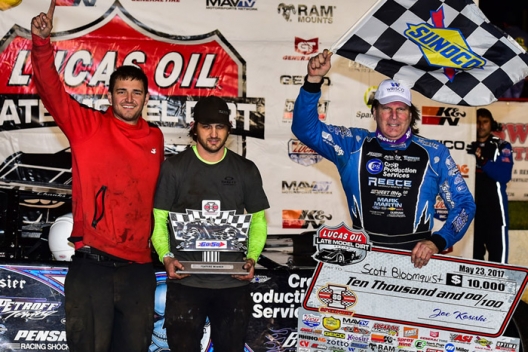 GREENWOOD, Neb. (May 23) — Scott Bloomquist has developed an affinity for I-80 Speedway.

The 53-year-old Hall of Famer from Mooresburg, Tenn., bolted to his third win in his last four starts at the 4/10-mile oval Tuesday, capturing the Lucas Oil Late Model Dirt Series-sanctioned Go 50.

Starting second in the mid-week event contested on a demanding surface, Bloomquist overtook polesitter and race-long pacesetter Darrell Lanigan of Union, Ky., for the lead on lap 11 and never looked back. The defending Lucas Oil Series champion had to deal with five caution flags once in command but handled every restart with relative ease as he marched unchallenged to his third victory in the last five features on the national tour and his series-leading fifth checkered flag overall of 2017.

“The track was in great shape all night long,” said Bloomquist, whose won I-80’s rich Silver Dollar Nationals in 2014 and ’15. “They had a lot of rain this week … (the track) was fast. You had to have a good handling car out there tonight with those conditions.”

Bloomquist steered his Sweet-Bloomquist car across the finish line a comfortable 2.298 seconds in front of Chalk Hill, Pa.’s Mason Zeigler, who slid his XR1 Rocket machine past Lanigan for second place on a lap-12 restart and stayed there for the remainder of the distance.

Earl Pearson Jr. of Jacksonville, Fla., made a strong advance forward from the 16th starting spot to finish third in the Dunn-Benson Racing Longhorn mount. Gregg Satterlee of Indiana, Pa., climbed from the 14th starting spot to the runner-up spot in 17 laps but slipped backward on a lap-21 restart and settled for a fourth-place finish in his XR1 Rocket while Tim McCreadie of Watertown, N.Y., started and finished fifth in his Sweeteners Plus Longhorn but had to rally after nearly falling out of the top 10 during the race’s early laps.

Bloomquist diced with Lanigan during the race’s early laps, but after gaining command the Lucas Oil Series points leader dominated. He maintained an edge of around 2 seconds for most of the 21-lap stretch of green-flag racing that closed the race.

“There were several cautions and I was a bit concerned about the tires firing on the restarts,” said Bloomquist, who recorded his series-record 82nd career win. “Towards the end of the race the car was faster and I got a better handle on turn two … it had been causing the car to push a few times.”

Zeigler, 24, wasn’t able to make a serious bid for the lead but was very satisfied with his bridesmaid finish in his debut run at I-80.

“For our first time here we are very pleased,” said Zeigler, who recorded his second podium finish of the 2017 Lucas Oil season. “We came out to S&S here in Greenwood for work on our trailer and we decided we would stay and race. I am glad we did. It’s a fun race track to run on. We will be back in the future, no doubt about it.”

A red flag was displayed on lap seven when Chris Simpson of Oxford, Iowa, flipped wildly on the backstretch. He was in the process of overtaking Hudson O’Neal of Martinsville, Ind., who had gotten out of shape on the inside of the track, off the top of turn two when Simpson’s left-rear and O’Neal’s right-front made contact. Simpson’s car then bounced, barrel-rolled once and somersaulted end-over-end before coming to rest on all four wheels with its left-side door ripped off.

Both Simpson and the 16-year-old O’Neal, who hit the backstretch wall hard behind Simpson, escaped injury.

The race’s first caution flag flew on lap 12 when Mike Marlar of Winfield, Tenn., suddenly stopped in turn four while running second. Marlar had followed Bloomquist past Lanigan and appeared primed to bid for the lead, but he was apparently struck in the helmet by a rock. An ambulance took him an emergency room where he was released after scans didn't find any problems.

Subsequent caution flags flew on lap 16 for Jake O’Neil of Tucson, Ariz., who slapped the turn-two wall; lap 21 for Josh Richards of Shinnston, W.Va., who slowed and pitted to clear his mud-packed right-rear wheel and swap out his mud-covered helmet but came back to finish sixth; lap 22 for the slowing car driven by Tad Pospisil of Norfolk, Neb.; and lap 29 for Jimmy Owens of Newport, who slowed while running sixth.