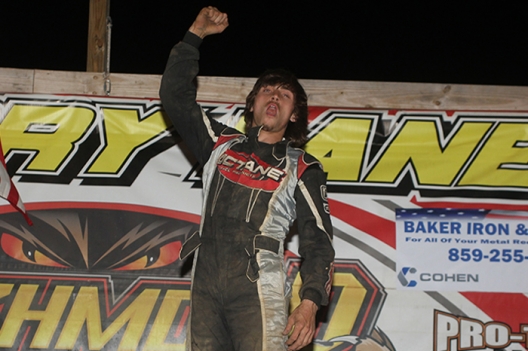 RICHMOND, Ky. (May 20) — Tyler Carpenter of Parkersburg, W.Va., has made the trip to Richmond Raceway just two times in his racing career. Each of those visits has ended in victory lane.

Charging to the front of the field at the drop of the green flag, Carpenter led all 50 laps, holding off Zack Dohm of Cross Lanes, W.Va., through the final circuits to earn a $10,000 victory in the event co-sanctioned by the Schaeffer Oil Iron-Man Series and Southern Nationals Bonus Series.

“This is one wicked track,” Carpenter said in victory lane. “I know it’s one-lane, but this is what I like. You can maneuver some, but you’ve got to be real easy. I love this little place. Richmond is the bomb. My two biggest races in my whole life was here. To be able to set fast time, win the heat and lead every lap of the feature, that’s just unreal. This Kryptonite Race Car is on the move."

While Carpenter cruised over the field, the early laps saw a tight battle between outside polesitter Chase Junghans of Mahattan, Kan., and Brandon Sheppard of New Berlin, Ill. Sheppard’s charge came to an end on lap 18, as the Rocket driver pitted under caution.

Carpenter maintained his lead as the race went back green, with Dohm working his way from the 13th starting position to join the frontrunners. As the leaders approached lapped traffic, Dohm attempted to reel in his fellow West Virginia native, but it wouldn’t be enough, as Carpenter went on to score his second career Richmond victory.

“I had guys giving me hand signals,” Carpenter said. “They said I had two to three car lengths most of the race. When they said it was closing in, I didn’t know if I needed to get up on the wheel a little harder or just stay put. I just stayed put and I felt Zack (Dohm) bump me a little bit. He must have been pretty good, because I was pretty good. He was on to something."

Dohm, a former Richmond winner, finished runner-up, with Junghans running third. Justin Rattliff of Campbellsville, Ky., finished fourth, with Brandon Overton of Evans, Ga., improving from the 11th starting position to round out the top five.

“To start the race it wasn’t rubbered up at all,” Dohm said. “I come from 13th. I had a little harder tire on that them guys. Congrats to (Carpenter). I race with him all the time and he’s hard to beat.”

Making his first-ever visit to Richmond, Junghans put together another solid night in his new Rocket XR1.

“The car wasn’t bad,” Junghans said. “I think we just kind of missed it on the tire. Hats off to those guys, they were pretty good. We’ll take it. We’ve been running consistent in this new Rocket XR1 and we’re just tickled to death to be running up front. If we keep on running up here, we’ll eventually get a win."

Notes: Carpenter, the winner of July's Butterball Wooldridge Memorial at Richmond, notched his eighth Super Late Model victory of the season. ... Runner-up finisher Zack Dohm was the winner of last year's Iron-Man event at the central Kentucky oval. ... The race was slowed by two cautions. ... Johnny Wheeler and Eddie Carrier Jr. tangled in turns one and two to draw a caution on lap 18. ... A yellow flag waved on the ensuing restart when Jackie Boggs and Adam Bowman tangled in turns one and two. ... The inaugural Mike Roland Memorial race was co-sanctioned by the Southern National Bonus Series and the Iron-Man Series. ... The event honored the late Mike Roland, a stalwart in the Kentucky racing community and former Richmond track official.