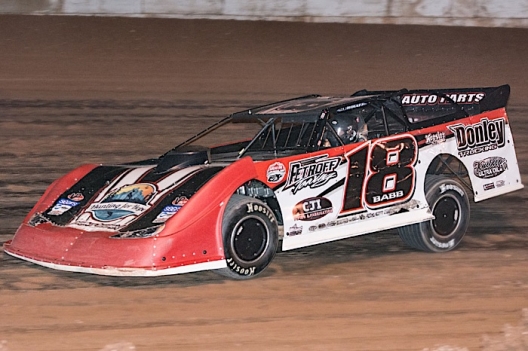 LUXEMBURG, Wis. (May 19) — Shannon Babb seems to be regaining his old touch.

Babb’s $10,000 triumph — his first on the Lucas Oil Series since Aug. 15, 2015, when he won the Topless 100 at Batesville Motor Speedway in Locust Grove, Ark. — was his second overall of the young 2017 campaign. His first checkered flag last year didn’t come until December when he claimed the preliminary A-main of the VP Racing Fuels Gateway Dirt Nationals at the Dome at American’s Center in St. Louis, Mo.

“We just got that monkey off our back and everything’s been good for us,” said Babb, whose first win of ’17 came in the May 11 Farmer City 74 preliminary feature at Farmer City (Ill.) Raceway. “We’re not doing anything different. We’re just rolling on. We’ve had a good car along … we just had a lot of weird things happen to us (last year). It’s coming around now.

“The setup just matched this place really well,” he added. “We went out and hot-lapped and the car felt good and just stayed consistent all night.”

A pole position starting spot was all Babb needed in a race that saw passing at a premium throughout the distance. He outgunned front-row mate Josh Richards of Shinnston, W.Va., for the lead at the initial green flag and never looked back in his XR1 Rocket car, repelling several late-race bids from the 28-year-old Richards to defeat the first-time Lucas Oil Series regular by 0. 964 of a second.

Darrell Lanigan of Union, Ky., and Lucas Oil Series rookie Gregg Satterlee of Indiana, Pa., placed third and fourth, respectively, finishing in the same positions that they started. Tim McCreadie of Watertown, N.Y., was able to sneak forward from the eighth starting spot to finish fifth in the first-ever Lucas Oil Series visit to the quarter-mile oval outside Green Bay.

McCreadie, who reached fifth with a lap-39 pass of Oakwood, Ill.’s Bobby Pierce, made up some significant ground in the Lucas Oil Series points standings thanks to the off night experienced by points leader Scott Bloomquist of Mooresburg, Tenn. Coming off a victory Thursday night at La Salle (Ill.) Speedway, Bloomquist started sixth but faded immediately due to an incorrect tire choice, stopped on lap seven to bring out the race’s lone caution flag and finished 17th after pitting for a tire change.

Clinging to the inside lane on the slick, shiny track surface was the key for Babb, who made his first career start at Luxemburg.

“When I was creeping around the bottom I was looking to that outside and I wondered if anybody was gonna go up there,” said Babb, who recorded his 12th career win on the Lucas Oil Series. “I watched them heat races and watched Darrell (Lanigan) roll the outside of Scott (Bloomquist) so I knew he was capable of doing it. You just don’t know … when you’re leading them things you’re just trying to run that one groove and make the best laps you can.”

Traction was also hard to come by for everyone in the field, leaving Babb to tip-toe around the speedway.

“This tire rule is really cool,” Babb said of the Lucas Oil Series’s requirements. “Me and Josh (Richards) were just talking … we’re in there steering and trying to let off and roll and aim the car. They’re hard to drive on these soft tires on this black stuff, but it’s a lot of fun too. You’re slipping and sliding.”

Richards, racing one night after letting a La Salle victory slip through his fingers because he lost the handle on his Best Performance Rocket machine while leading with five laps remaining, chased Babb relentlessly. He nearly snuck underneath Babb off turn four with four laps remaining but couldn’t find a way to pull ahead.

“A couple time there I thought we could get under Shannon,” Richards said. “It was weird … you could hit your marks perfect and gain just a little bit, but then you would lose just a little. You could move around a little bit, and it seemed like the pace didn’t really change a whole lot.

“I just tried to move up (on the last lap). At that point we didn’t have anything to lose. It didn’t hurt to try.”

Lanigan, 46, pulled off one of the night’s most impressive moves when he passed Bloomquist to win the third heat, but he was unable to duplicate the maneuver in the feature.

“There in the heat race the outside started to come in a little bit and we got around Scott,” said Lanigan, who registered his fourth top-five finish on the ’17 Lucas Oil Series. “I thought maybe it would clean up enough that we could get on the outside in the feature, but it was just too dirty up there and you couldn’t get up there.”