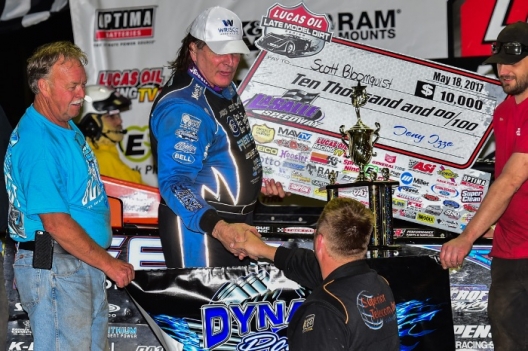 LA SALLE, Ill. (May 18) — Scott Bloomquist certainly knows a race is never over until it’s over.

The latest demonstration of that famous adage came Thursday for Bloomquist, who appeared headed to a second-place finish in the 50-lap Hoker Trucking Spring Shootout at La Salle Speedway until he inherited the lead with five laps remaining thanks to a shocking caution-causing half-spin by Josh Richards of Shinnston, W.Va.

Dennis Erb Jr. of Carpentersville, Ill., marched forward from the 10th starting spot to finish third after spending much of the feature’s second half in close competition for position with Marlar. Don O’Neal of Martinsville, Ind., placed fourth and Tim McCreadie of Watertown, N.Y., was fifth despite racing the entire distance with a bent right-rear spoiler after clipping the outside wall on the opening lap.

Richards, 28, finished a disappointing 11th after he had to restart at the tail end of the lead lap (15th place) on lap 45 because he was charged with bringing out the caution flag.

The event’s $10,000 top prize seemed destined for Richards after he climbed forward from the fifth starting spot to wrestle the lead from Bloomquist, the race-long pacesetter, with an inside move off turn four on lap 36. When the five-to-go signal was displayed, Richards had a short-but-solid 1.7-second edge over Bloomquist.

But moments later Richards’s Best Performance Motorsports Rocket slid completely sideways in turn two. He managed to avoid spinning and regained control of his car on the inside of the track without coming to a complete stop, but the caution flag had already been put out as a safety precaution so he could not continue where he blended back into the field.

Bloomquist gladly accepted the gift that propelled him to his 81st career victory on the Lucas Oil Series. He had a clear view of what happened to Richards, who was chasing his second win in as many visits to La Salle this season after capturing the Thaw Brawl preliminary feature on March 24.

“It was really faster to be up there (running the top of the quarter-mile oval), but it was so treacherous to hook or jump the cushion,” said Bloomquist, who won for the second time in his last three Lucas Oil Series starts. “Sometimes you had to hit the cushion kind of sideways … and it was a little bit slick below it, and it looks like (Richards) was just a little bit too far below it and was anticipating hitting it and didn’t hit it.”

After securing the dramatic triumph, Bloomquist hailed his crew.

“We’ve been working our butt off the last few weeks after crashing a car back a few weeks ago to try and get a new (Sweet-Bloomquist machine) done,” said Bloomquist, who started second. “We put a lot of hours in.”

Marlar wasn’t able to challenge Bloomquist over the final five laps, but his fate might have been determined earlier in the distance. He threatened Bloomquist several times before the race’s first caution flag flew on lap 11 — a caution for Hudson O’Neal of Martinsville, Ind., who stopped with terminal mechanical woes while running sixth, that dulled Marlar’s momentum.

“I had a good car,” said Marlar, who watched Richards vault from fourth to second on the lap-11 restart. “I definitely didn’t want to see that caution when they had that double-file start. That lets the leader just drive away when you gotta line up beside the guy you just passed.”

Erb, meanwhile, reached fourth place behind Marlar on lap 20 but couldn’t pick up any more positions until Richards ran into trouble on the evening’s fast, heavy surface.

“With the racetrack the way it was, to be able to start deep in the field and work our way up there, we’re happy with that tonight,” Erb said. “I just wish we were just a little bit tighter there at the end where we could come off the corner a little straighter. We could run with ‘em, but we just needed a little extra there.”

For Richards, he simply had to be satisfied that he potentially had the race’s fastest car after the apparent victory slipped through his fingers.

“I really just screwed up,” Richards said. “(Turn) one was a little weird. There was a couple of holes and I was really tight getting in (to the corner). I had to throttle (up) to get the car turned just perfect to run the top, and that lap I decided — I felt like I needed to (pass) one more lapped car to feel comfortable, and looking back I probably should’ve just rode it out — I saw (Gregg Satterlee) in front of me and I carried speed off into (turn) one and I bounced and hit the throttle, and the car rotated way quicker than I anticipated, and we just couldn’t catch it after that, and just spun out.

“I hate it that I let my guys down, but I’m glad that we made the right calls tonight and we definitely had a lot of speed. So that is the good thing, but we’ll try again tomorrow.”

Three caution flags slowed the race, including a second yellow on the restart following Richards’s incident when Bobby Pierce of Oakwood, Ill., pulled up lame in turn one because his car popped out of gear as he held fifth place.

Notes: Bloomquist tallied the third Lucas Oil Series victory of his career at La Salle. His previous triumphs came in 2006 and ’10. … Shannon Babb of Moweaqua, Ill., made a noteworthy charge from the 20th starting spot to finish sixth, capping his run by gaining two positions in the final five laps. … Frank Heckenast Jr. of Frankfort, Ill., relinquished 11th place when a flat tire forced him to pit during the first lap-45 caution period, but he ultimately lost just one spot, finishing 12th. … Eighth-starter Steve Francis of Bowling Green, Ky., finished a lap down in 14th after losing significant ground when he slid through the infield on lap 17 without causing a caution flag. … Earl Pearson of Jacksonville, Fla., flipped wildly on the opening lap of the second heat after his Dunn-Benson Racing Longhorn Race Car bicycled onto its right side as he slid through turns one and two. After his machine came to rest on its roof, Pearson was able to squeeze out of the cockpit with assistance from safety officials. Though a bit dazed, Pearson told DirtonDirt.com pit reporter Dustin Jarrett that he was OK before hitching a ride back to the pit area with a Lucas Oil Series official; he later used a provisional to start the feature in his backup but took only one lap and pulled off. ... Missing from the field was 2016 Lucas Oil Series Rookie of the Year Colton Flinner of Allison Park, Pa., who announced Thursday that he was dropping off the national tour.

EPJ rides out rough one

Four-time Lucas Oil Series champion Earl Pearson of Jacksonville, Fla., appeared to escape injury in a wild flip on the opening lap of the second heat.

The 45-year-old driver’s Dunn-Benson Racing Longhorn Race Car bicycled onto its right side as he slid through turns one and two and proceeded to roll over. After the machine came to rest on its roof, Pearson was able to squeeze out of the cockpit with assistance from safety officials.

Though a bit dazed, Pearson told DirtonDirt.com pit reporter Dustin Jarrett that he was OK before hitching a ride back to the pit area with a Lucas Oil Series official. Sitting sixth in the points standings, Pearson was expected to unload his backup car to continue racing.