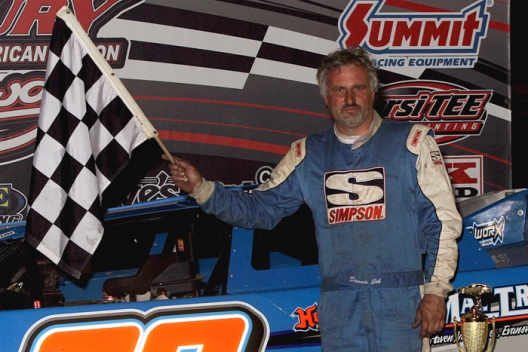 FAIRBURY, Ill. — It took a while for Dennis Erb Jr. to get rolling at Saturday’s FALS Frenzy, but once he did, the Carpentersville, Ill., driver couldn’t be denied at Fairbury (Ill.) American Legion Speedway.

The third-starting Erb slipped back to sixth early before injecting his No. 28 into a literal frenzy for the lead in a mid-race battle with Chase Junghans, Don O’Neal and Ryan Unzicker.

After a lap-24 caution halted the dramatic showdown for the lead, Erb went to the outside and took command, leading the rest of the 50-lapper for a $10,000 victory co-sanctioned by the Sunoco American Late Model Series and MARS DIRTcar Series.

"We started off a little slow there. Once everything come to us and the racetrack started to clean up we were able to carry some speed through the corner,” Erb said. "I was kinda testing it out there as we were inching our way up there. Once the track started cleaning up, the car worked real good there through the middle.”

The eighth-starting Junghans blasted to the front early, taking command on the second lap with Jason Feger, O’Neal, Unzicker and Ferguson giving chase while Erb slipped back to sixth.

Erb worked his way to third on the 18th lap just as Junghans was having his hands full with O’Neal. Unzicker joined the three-car battle for the lead that was halted by a mid-race caution, setting up the restart that allowed Erb to use the outside groove to take command.

“It’s been a little bit of up and down, but I think we’re back on track,” said Erb, who notched his second victory of the second but his first top-five run since early April. “We’re finding some things to get back going and hopefully we can continue with this.”

Junghans, who made his third start in a new Rocket Chassis his team completed earlier in the week, was pleased with a runner-up performance.

“I thought I (actually) had a chance to win it at the end,” the 24-year-old said. “I haven’t run up front for a while, so I’ll take second. Our car was really good and I’m just tickled to death right now.

“At the beginning, this thing, I was just holding the steering wheel and driving around. I didn’t think I was going to take off that good … this thing just took off and I was just riding around. That caution came out and it bunched us all back up and Dennis got back by me, but that guy’s been good here since (I’ve) ever came here, so I’m not mad I ran second to him, for sure. We would’ve like to have won, but I think we’re close.”

Junghans was definitely close in the final laps when Erb found his path blocked by traffic.

“I was kind of worried about that,” Erb said. “I had two (slower) cars right in front of me, so it was kind of like the racetrack was blocked in each line. The racetrack was a little bit clean down on the bottom and I was sticking good down there, so I kept trying to follow that low line there through the traffic and try to keep (his pursuers) on the outside of me. You never know what’s going to happen when you get up in traffic like that, but luckily it all worked out.”

Junghans and Unzicker followed Erb in the low line, with Unzicker trying the high groove in the final corners when it was too late.

“I’m actually kind of kicking myself in the ass a little bit about it, and my crew, and Pro Power (Engines) Bill (Schlieper) (my) shock man, they were all, ‘Man, you should’ve done it, you’ve got nothing to lose, you got to get up there,’ ” Unzicker said.

“If there was no cars running in the middle, and everybody was on the bottom, I probably would’ve done it. But I seen some guys in the middle and I didn’t think I could get enough momentum run to get around Junghans. I mean, I did it the last corner of the last lap, I maybe should’ve done it with one or two (laps) to go, and probably, if it didn’t work, I would’ve got passed. If it did work, maybe I’d have been a hero, who knows. To salvage a third after (failing to make the feature lineup at Farmer City) last night, we’re tickled to death with that.”

Notes: Erb’s second victory of 2017 came in his 27th appearance of the season. … Clint Bowyer Racing driver Darrell Lanigan of Union, Ky., was scheduled to start outside the front row, but his disabled machine was pushed to the infield before a single lap was complete. … Pulling double-duty, Timothy Culp of Prattsville, Ark., picked up the victory in the modified feature that paid $2,000-to-win. He finished 25th in the Late Model feature.