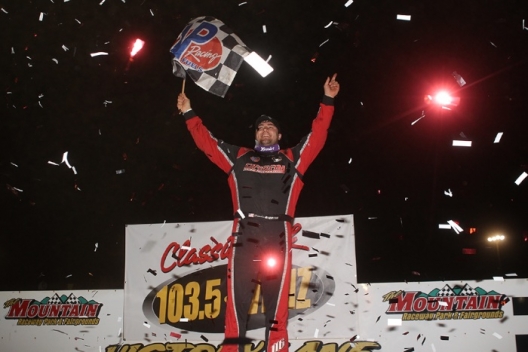 MARYVILLE, Tenn. (May 13) — Brandon Overton isn’t a World of Outlaws Craftsman Late Model Series regular this season, but he is a winner.

On Saturday night the fast-rising 26-year-old star from Evans, Ga., added a WoO triumph to an ever-growing list of successes in his first full year driving for the Dream Racing No. 116 team, capturing the national tour’s Mountain Outlaw 50 at Smoky Mountain Speedway.

Overton, who chased the entire WoO schedule in 2015 and ’16 but is maintaining a pick-and-choose special-event slate this season as the replacement for the retired Randy Weaver in Chip Stone’s equipment, showed his strength in earning Saturday night’s $10,000 top prize. He passed WoO points leader Brandon Sheppard of New Berlin, Ill., for the lead on lap 20 and never looked back en route to his second career WoO checkered flag.

The victory was the seventh overall in 2017 for Overton, who turned around a past dotted with struggles at the half-mile oval by demonstrating the wisdom he’s learned from Weaver.

“I suck here so bad most of the time,” said Overton, whose previous WoO win came on June 25 at Lernerville Speedway in Sarver, Pa. “I’ve watched every DirtonDirt video of this place that I can, and the whole time I was out there I just kept thinking about what Randy told me. Obviously he won a lot of races here and knows how to get around this place … every time I  made a mistake I just made sure I didn’t do it again.”

Overton steered his Longhorn Race Car across the finish line with a comfortable edge of 2.282 seconds over the Longhorn driven by Chris Madden of Gray Court, S.C., who overtook Shane Clanton of Zebulon, Ga., for the runner-up spot on lap 44. Clanton settled for a third-place finish in his Capital machine, seventh-starter Casey Roberts of Toccoa, Ga., finished fourth in a Longhorn and Sheppard faded to fifth in the final rundown after starting from the pole position and leading laps 1-19 in the Rocket Chassis house car.

Sheppard, 24, outgunned his front-row mate Overton for the lead at the initial green flag in the feature, but Overton calmly stalked his fellow young gun through the race’s early stages before making his move on lap 20. Overton sailed around the outside of Sheppard rounding turns three and four to assume command.

“I knew Sheppard had the thing rolling there at the beginning and I was just trying not to burn my tires up,” said Overton, the 2015 WoO Rookie of the Year. “I just waited until the opportunity came right there in lapped traffic. I knew we had a good car … I just didn’t want to abuse it early. I’ve lost too many of ‘em that way and it kind of gets old.”

Overton continued praising his well-oiled team for propelling him to victory lane.

“Dude, I can’t thank the boys who work on this thing enough,” said Overton, who since his debut with the Dream Racing team last November has registered eight wins and 20 top-five finishes in 30 starts. “They never gave up. We run like crap in that heat race and we went back and got it all tuned up for the feature.”

Madden, who will celebrate his 42nd birthday on May 23, never had a chance to threaten Overton after finally overtaking Clanton for second with six laps remaining. He happily took a bridesmaid finish, however.

“We’re satisfied with our run tonight,” said Madden, who moved to second in the WoO standings, 84 points behind Sheppard. “We had a good car … we just drew a 5 (starting spot) there on the redraw. When you have cars of this competition, it’s just hard to start behind ‘em and pass ‘em at this level of racing.

“We’ve been working on our car this week to be able to run in a little more dirty air,” he added. “We’ve been struggling running in dirty air behind cars, but I think we’re on the right program to help it and make it better.”

While Clanton, 41, allowed a runner-up finish to slip through his fingers, he tallied another podium performance to continue his rally from a poor start that buried him in the WoO points battle.

“I hate letting Chris get by me in lapped traffic, but it is what it is,” said Clanton, who climbed to a season-high sixth in the WoO standings. “At least we had a good car tonight.”

Just two caution flags slowed the feature, both early in the action. Donald Bradsher of Burlington, N.C., and Skip Arp of Georgetown, Tenn., tangled in turn two to bring out the first caution on lap three and Tommy Kerr of Maryville, Tenn., triggered the second on lap nine when he slowed on the track.

Notes: Overton was the eighth different winner in 11 WoO events this season. … Dale McDowell of Chickamauga, Ga., was running third when rear end problems eliminated him on lap 14. … Jonathan Davenport of Blairsville, Ga., started fourth but slipped to seventh in the finishing order with his Barry Wright house car. … Steve Francis of Bowling Green, Ky., was the lone Lucas Oil Series regular to enter the event and finished 16th. … WoO competitors head to Duck River Raceway Park in Wheel, Tenn., on Sunday night for another $10,000-to-win program. The track’s WoO show was postponed from its original Friday-night date by wet weather.