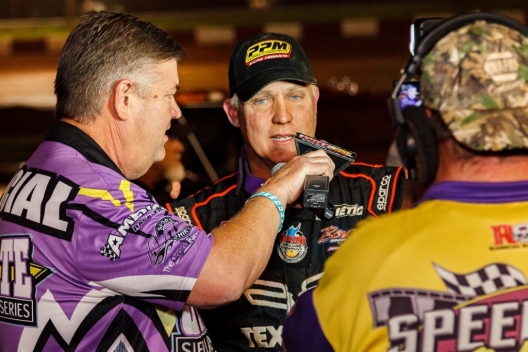 Kevin Prater/praterphoto.com
Dale McDowell tells the Rome Speedway crowd about his $4,000 victory.
What won the race: Reversing the finishing order from a battle the previous night, Dale McDowell of Chickamauga, Ga., overtook Brandon Overton with two laps remaining Sunday at Rome Speedway for a $4,000 Ultimate Southeast victory. Overton led laps 25-38 before slipping ever so slightly as he tried to get around the lapped car of Jim Manka. McDowell took advantage of the slight bobble and slipped past the leader as they raced off of turn two.
Quotable: "It's ironic, last night I messed up in lapped traffic and got (passed) by Brandon and tonight he kinda got in lapped traffic and I got by him. So this world is really round I guess. It comes back around," said McDowell. "Actually the groove moved aroun. I stayed on the bottom too long early and the top got going so I moved up and then the bottom got going there at the end and I was able to make a few passes there, so it was a good night for us."
Key notes: Finishing in front of Overton by .721 of a second, McDowell notched his second victory of 2017. ... Brandon Overton led 13 laps. … Polesitter Jonathan Davenport took the lead on the initial green and led the first 24 laps. … McDowell dropped Davenport to third on lap 28 but a caution erased the move. He eventually made the pass stick on lap 30. … Rome runner-up Brandon Overton had overtaken McDowell late in Saturday's Southern All Star event at Talladega (Ala.) Short Track. ... McDowell won his first Ultimate Southeast event and first since 2013. ... Overton enjoyed a one-second lead over McDowell when he caught lapped traffic with five laps remaining. … The race was slowed by five cautions, with the final yellow waving on lap 31. … The race took just more than 34 minutes to complete. ... Thirteen drivers finished on the lead lap. ... Saturday’s Ultimate Southeast race at Dixie Speedway in Woodstock, Ga., was rained out and rescheduled for July 29, making Sunday’s stop at Rome the lone Ultimate race of the weekend.
On the move: Luther Jenkins of Waleska, Ga., finished ninth after starting 18th and 15-year-old Zach Leonhardi started 23rd and finished 11th.
Winner's sponsors: McDowell’s Sweet-Bloomquist Race Car is powered by a Clements Racing Engine and sponsored by Textron Off Road, New Era Industrial, Boyd’s Speedway, Will Kinzer Foundation, Cometic Gasket and Klotz Lubricants.
Points chase: Entering the race, Jonathan Davenport led the series with 140 points followed by Jason Welshan (137) and Tyler Millwood (122).
Car count: 27
Fast qualifier: Jonathan Davenport
Time: 13.063 seconds
Polesitter: Jonathan Davenport
Consolation race winners: Casey Roberts, Austin Smith
Next series race: May 13, Clary's Speedway (Brinkleyville, NC) $4,000
Editor's note: Results and race details are unofficial.