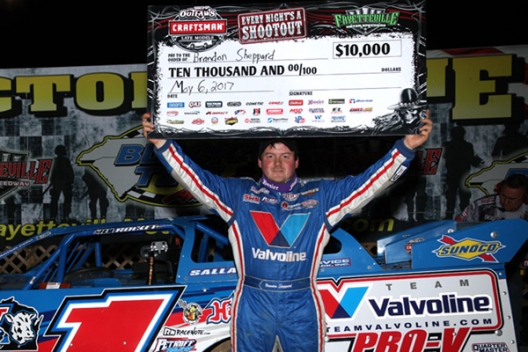 But the 24-year-old star singled out one individual for providing perhaps the most critical element of his $10,000 triumph.

“I wish I could get that kid that drew the (number one) pill (in the feature redraw) to come by the truck,” Sheppard said with a smile. “I’d probably give him a t-shirt.”

Indeed, the youngster who put Sheppard on the pole position played an outsized role in a 50-lap feature that saw passing at a premium. Sheppard took advantage of the prime spot to dominate the race, leading every circuit without facing a serious challenge.

Tyler Erb of New Waverly, Texas, started alongside Sheppard on the front row and chased the eventual winner for the entire distance. But, aside from closing within a couple car lengths of Sheppard shortly before the race’s first caution flag on lap 19, the 20-year-old couldn’t stick with the leader and settled for runner-up money in his XR1 Rocket, 2.103 seconds behind Sheppard.

Sheppard’s checkered flag gave his Rocket house car team another successful at Fayetteville, a 4/10-mile oval where Richards won WoO features in 2008 and ’10 with his son, Josh, behind the wheel.

“I guess it races a lot like what we’re used to,” Richards said after his No. 1 reached victory lane for the third time in seven WoO events at Fayetteville. “We’re kind of used to this kind of condition.”

Sheppard used his team’s knowledge of Fayetteville to record his first-ever win at a facility he had previously found tough to handle.

“We’ve been working really hard and we’ve gotten the car a lot better the past few weeks, especially for the Carolina tracks, the Tennessee tracks,” said Sheppard, who pushed his points lead to 78 points over Erb through 10 events as he chases his first-ever WoO title. “I’ve always struggled a little bit at them kind of places, so it feels good to be getting wins and top-three finishes.”

And Sheppard did it in convincing fashion, controlling the entire distance. He was especially strong on restarts, pulling away immediately from Erb following late caution flags on lap 43 for Clanton’s flat tire, lap 46 for Eric Wells of Hazard, Ky., slowing with a flat right-rear tire while seventh and lap 47 for Ben Watkins of Rock Hill, S.C., relinquishing ninth place due to a flat right-rear tire.

“I think our right-rear tire let us do that, but we had a really good car,” Sheppard said of his restart strength. “I wasn’t pushing it. I don’t think I pushed it as hard as it would go (for) one lap.”

Erb was satisfied to match his career-best WoO finish of second. He was aware that overtaking Sheppard would take some good fortune.

“That one run where we got into lapped traffic (early in the race),” Erb said when asked about his best shot at passing Sheppard. “If he may have gone high, maybe just one more corner, maybe we’d have gotten him.”

Eckert, 51, was a quiet third in his Paul Crowl-owned Longhorn Race Car, which sported new sponsorship from Mobil 1 for the WoO weekend in the Carolinas.

“We weren’t very good, but we are getting better,” said Eckert, who ended the weekend ranks fourth in the WoO points standings. “We’ve still got a little ways to go to catch these guys.”

Six caution flags slowed the event, including yellows on lap 19 for 2016 Fayetteville WoO winner Brian Shirley of Chatham, Ill.; lap 28 for Willie Milliken of Roanoke Rapids, N.C., who had his apparent victory in the ’16 WoO stop at Fayetteville stripped after a tire he used failed a laboratory test; and lap 36 for Chub Frank of Bear Lake, Pa., who was running 10th when his car sustained front end damage in a turn-one incident and had to be towed off.

Notes: Sheppard scored his ninth career WoO victory. … Devin Moran of Dresden, Ohio, battled forward from the 12th starting spot to finish sixth, one spot behind fellow WoO rookie contender Bradsher. … Clanton, who won the previous night’s WoO feature at Cherokee Speedway in Gaffney, S.C., rallied to finish ninth after pitting for a new tire with seven laps remaining. … Frank Heckenast Jr. of Frankfurt, Ill., dropped from eighth to a finish of 16th after slowing with a flat right-rear tire on the feature's final lap. ... WoO officials presented the tour’s 2016 Promoter of the Year award to Fayetteville’s Jim Long Jr. during the evening's action. ... Missing from competition was Fayetteville's 2015 WoO winner, Chris Ferguson of Mount Holly, N.C., who was sidelined by engine trouble his car suffered the previous night at Cherokee.