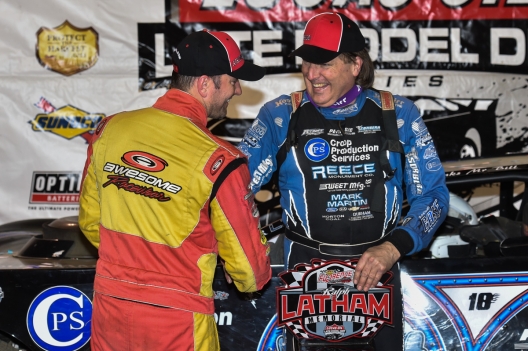 UNION, Ky. (May 6) — Charging to the front of the field at the drop of the green flag and leading all 60 laps, Scott Bloomquist of Mooresburg, Tenn., scored his second consecutive Ralph Latham Memorial victory on Saturday night at Florence Speedway, earning a $12,000 payday in his third Lucas Oil Series victory of the season.

“It was getting pretty slippery out there,” Bloomquist said in victory lane.”Without being able to groove or sipe the right-rear tire, you get some surprises when you hit the slick stuff. But the car was pretty good. I probably would have adjusted a little bit different if I could do it over. But all in all, pretty good.”

Starting outside the front row, Bloomquist cruised over the field in the early running, with second-running Tim McCreadie of Watertown, N.Y., reeling in the race leader as the frontrunners approached lapped traffic. Just as McCreadie was ready to challenge the Hall of Famer for the lead, a yellow flag waved on lap 18, slowing his charge.

As the race when back green, Bloomquist held his lead through late-race restarts. Successfully navigating lapped traffic, he was never seriously challenged for the lead a second time, taking the checkers for his fourth career Ralph Latham Memorial victory.

“I just had to be careful not to get in too high and let the car scoot too much,” Bloomquist said. “I knew if I could keep the lapped cars down that (McCreadie) would have a hard time getting through them too.”

“Yellows fell his way,” McCreadie said. “He did a good job. I’m happy with our guys. We worked pretty hard to have this car be as competitive as it is. I think we need some more tweaking. I just don’t fire good on restarts and once we get rolling I’m pretty good.

“Josh (Richards) is tough. I think he was going to get me whether I took the top or the bottom. I had struggled to hold him off the last restart. It’s the way it goes. This game’s tough.”

A former World of Outlaws competitor, Richards made his first appearance at the northern Kentucky oval in five years. The Best Performance Motorsports driver was pleased with his podium finish and is looking forward to getting back to Florence later this season.

“We’ll take it,” Richards said. “I haven’t been here in five years and the track’s changed a lot since I’ve been here. We had a really good car. We unloaded pretty good and hot laps and qualified well. The heat race, we were definitely off a little bit. The track transitioned a little bit. But we made some changes there and I felt like we had a really solid run.

"The lapped cars could have gone either way. We could have maybe gotten by (Bloomquist) or ended up second or third right where we were at. We had a pretty good run tonight, had a good car. We’ll try to get a little bit better for later in the year.”

Notes: Bloomquist scored his third Lucas Oil Series triumph of the season and fourth career Ralph Latham Memorial victory; he also won the event in 2016 for a $30,000 payday. ... The race was slowed by four cautions. ... The first yellow flag waved on lap 18 when Dennis Erb Jr. slowed on frontstretch. ... Robby Hensley slowed to draw a caution on lap 35. ... Battling for the fourth-place spot, Michael Chilton slowed with a left-rear flat on lap 38, with Steve Francis slamming in to the back of the No. 97 as the race fell under yellow. ... The final yellow flag flew on lap 40 when Boom Briggs spun in turn two. ... Cody Mahoney rolled his No. 4 on the front stretch during the third heat race; he piloted Dustin Nobbe's car in the main event. ... The annual race honors the late Cincinnati-area racing legend who toiled on both dirt and asphalt tracks, winning multiple track championships.