Information provided by: Staff and series reports (last updated May 6, 10:18 am)
Clanton survives late bid from B-Shepp at Gaffney 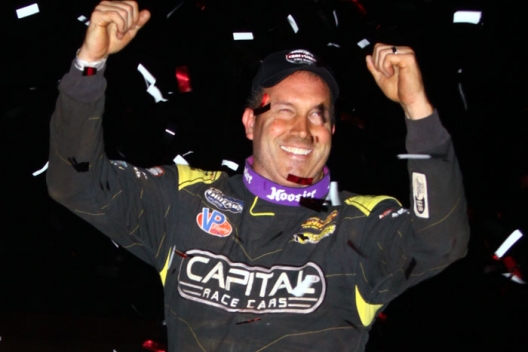 Continuing to dig himself out of a big points hole on the World of Outlaws Craftsman Late Model Series, Clanton survived a furious last-ditch challenge from Brandon Sheppard of New Berlin, Ill., to secure a flag-to-flag victory worth $10,000 in the national tour’s 50-lap feature Friday night at Cherokee Speedway.

Clanton, 41, blasted off the outside pole to lead the entire distance of the first-ever WoO event at the 3/8-mile oval, but the 24-year-old Sheppard made things interesting after overtaking Eric Wells of Hazard, Ky., for second on lap 46. B-Shepp almost immediately caught Clanton’s Ron Davies-owned Capital machine and searched for a line to pull off a dramatic winning move.

Alas, Clanton turned back the threat offered by the Rocket Chassis house car driver. The 2015 WoO champion beat the circuit’s current points leader to the finish line by a narrow 0.339 of a second for his second WoO triumph of 2017 and 39th of his career.

Clanton’s first WoO checkered flag since Feb. 24 at Volusia Speedway Park in Barberville, Fla., moved him from 10th to eighth in the points standings. He ended the night trailing Sheppard by a still-hefty 114 points but was within just 40 points of second-place Tyler Erb of New Waverly, Texas, who finished eighth.

“It’s just hard work,” said Clanton, who recorded just his second top five finish (both wins) in nine WoO A-mains this season. “It’s a testament of my two crew guys … we’ve worked awful hard to get back to victory lane.”

Wells, who passed Sheppard for the runner-up spot on a lap-28 restart, settled for a third place finish is his father David’s Longhorn mount. Jonathan Davenport of Blairsville, Ga., inched forward from the eighth starting spot in the Barry Wright house car to finish fourth — he ran in the position for the race’s final 22 laps — and polesitter Chub Frank of Bear Lake, Pa., slipped back to place fifth in his Longhorn chassis.

Clanton, who debuted a new Capital car two weeks ago in victorious fashion at Senoia (Ga.) Raceway, let out a sigh of relief after escaping Sheppard’s charge.

“I didn’t know he was coming on top,” Clanton said of Sheppard’s attempt to steal the race in the final laps. “He (Clanton’s crewman) told me Brandon was on me and he told me to go to the top three the last two or three laps. I felt it up there and I was like, ‘Oh, I gotta go now.’”

Sheppard wished that he had thrown caution to the wind and hammered the top of the track with more laps remaining.

“I just didn’t make my move early enough I guess,” said Sheppard, who registered his sixth top-five finish in WoO competition this season. “I should’ve moved up … I should’ve been moving around a lot earlier. (Car owner) Mark (Richards) was telling me I had a pretty good edge over third place and I thought about moving up and I thought about, and I just thought about it too long.

“At the end of the day, we had a really good race car again. I wish it would’ve been the other way around, but congratulations to Shane. He’s had a little bit of a rough start so he did a good job.”

Wells was satisfied with his third-place finish. He spent the race’s closing stages worried that his car’s right-rear tire might let loose.

“I knew what we had on for tire and I wasn’t sure if we were gonna make it,” said Wells, whose fourth top-five finish of the season left him just two short of matching his top-five total from the ’16 campaign. “Running third, we didn’t want to give up a top-five finish. We were just gonna ride it out and see what happened.”

Third-starter Chris Madden of Gray Court, S.C., appeared to be in position to bid for victory at his home track after quickly surging into second place. But he lost the spot to Sheppard on lap 25 and then slowed on lap 28 with a flat right-rear tire that forced him to pit and left him with a disappointing 16th-place finish.

Madden brought out the second of the race’s two caution flags. The first came on lap 27 when Morgan Bagley of Tyler, Texas, slowed while running deep in the field.

Bagley’s feature problem came in his backup car after his primary machine was sidelined by damage it sustained during time trials when he hit the wall between turns one and two and rolled over. He wasn’t injured in the accident.

Notes: Clanton’s victory was his fifth overall of 2017. … Chris Ferguson of Mount Holly, N.C., was second-fastest in qualifying and won a heat, but after drawing the sixth starting spot for the feature he was forced off the track on lap two by mechanical failure. … Ross Bailes of Clover, S.C., who won Cherokee’s $10,000 March Madness event just under two months ago, started second in the first heat but had his Billy Hicks-owned car veer straight into the tractor tires protecting the turn-one wall while racing side-by-side with the polesitting Sheppard at the initial green flag. He wasn’t injured but had his night come to a quick end. … Brandon Overton of Evans, Ga., slowed on the homestretch on the second lap of Heat 3 after sliding sideways off turn four while battling for second with Casey Roberts of Toccoa, setting off a chain-reaction pileup. Donald Bradsher clipped the right-rear of Overton's car, which was sent spinning on the inside of turn one, while also swept up were Justin Williams, Josh Langley, Doug Sanders and Jason Covert, whose car slid completely off the track on the outside of turn one's wall-less spot. Only Bradsher went on to complete the prelim, which had just four cars running at the finish. … Fifteen drivers had entered all eight WoO events this season before Friday night’s action, but that number dropped to 13 after Cherokee. Billy Moyer Jr. of Batesville, Ark. (ninth in points entering the race) and Chase Junghans of Manhattan, Kan. (14th) dropped off the tour. … Light rain that moved in during hot laps delayed action for over an hour. Practice resumed at 9 p.m. and the feature ended at about 11:45 p.m. … Clint Bowyer Racing teammates Don O’Neal of Martinsville, Ind., and Darrell Lanigan of Union, Ky., entered the event, but they both decided to bypass action after the rain delay and head toward their Saturday-night Lucas Oil Late Model Dirt Series stop at Florence Speedway in Union, Ky. … The program marked Chris Dolack’s debut as the WoO Late Model Series director. He replaced Tim Christman, who attended Cherokee’s event to ease the transition and will serve as a consultant for the remainder of the season. … Former Lucas Oil Series technical director Kenny Kenneda took over the same position for the WoO at Cherokee, replacing the outgoing Melvin Welch.