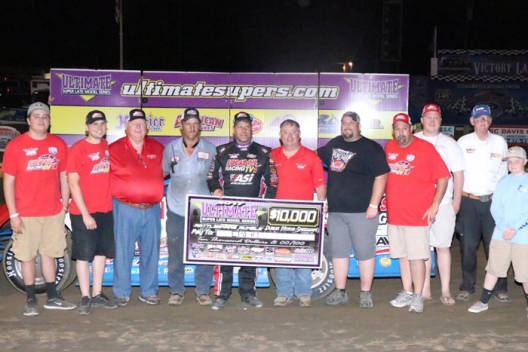 With his schedule left open by the midweek postponement of a Lucas Oil doubleheader in the Midwest, Pearson raced Saturday night at Dublin Motor Speedway — just an hour’s drive south of his Dunn-Benson Racing team’s shop in Dunn, N.C. — and rolled to a $10,000 victory in the Ultimate Southeast Super Late Model Series-sanctioned Rattlesnake Rumble.

Pearson, 45, controlled virtually the entire 50-lap feature distance, assuming command on lap two when polesitter G.R. Smith of Cornelius, N.C., stopped abruptly with terminal mechanical trouble and never relinquishing the spot. The four-time Lucas Oil Series champion was never seriously challenged over the remaining circuits, though Casey Roberts of Toccoa, Ga., did draw within striking distance in the closing laps and crossed the finish line just 0.568 of a second — about two car lengths — behind the victor in second place.

“I don’t know if it was easy or not,” Pearson said when it was suggested that he cruised to his first-ever triumph in Ultimate competition. “There at the end we was struggling pretty bad, but the track got one-lane.”

Dennis Franklin of Gaffney, S.C., finished a distant third, over 11 seconds behind Pearson and Roberts at the race’s conclusion. Chris Ferguson of Mount Holly, N.C., made a strong advance from the 19th starting spot after winning the evening’s B-main to place fourth and 12th-starer Russell Erwin of Beaverdam, Va., completed the top five.

Pearson, whose planned weekend trip to Illinois’s Tri-City Speedway in Pontoon Beach and Macon Raceway was postponed by track and series officials due to extremely wet weather, made the most of a rare opportunity to race close to his team’s home base. He recorded his second overall win of 2017 in just his second career start at Dublin.

“Carlton and Kemp Lamm (his team owners) have been around here for many, many years and I know all these people here know them,” said Pearson, who ranks sixth in the Lucas Oil Series points standings. “This is one heck of a racetrack. (The promoter) done a heck of a job with the weather the way it was … with it being so hot, that’s all they could do with the racetrack.”

Passing was at a premium for most of the race, so Pearson, who started third, found himself in the perfect position for the conditions. His Longhorn Race Car slowed down rather than sped up as the A-main wore on, but the seventh-starting Roberts, who reached second place on a lap-two restart and chased Pearson the rest of the way, couldn’t stray from the optimum inside lane to make a bid for the top prize.

“The 101 car (Roberts), they was awful strong,” said Pearson, who thought his car might have been hampered by something that was bent in an scrape with Franklin at the start of the race. “Everything fell our way tonight. The car was good early, but the longer we run, the worse we got. Luckily it was single-file.

“We just rode around the bottom, and I didn’t want to get up there and pressure them lapped cars where I made a mistake.”

Considering the playing field he had to work with, Roberts was satisfied with a runner-up finish in his Jim and Ann Cushman-owned Longhorn.

“He had a great car … congratulations to him,” Roberts said of Pearson. “He helped us out today, so he’s just a great guy there. We had a good run, just come up a little short. If you can run second to him, it’s a good night.”

Franklin, who started fourth, had a firm grasp on third place by lap three. He couldn’t keep pace with the leaders but found a silver lining in his performance.

“We’re making headway,” Franklin said. “I’m just glad to get this M&W Transport car in third place. We’ve been struggling, but man, we’re working hard, we really are. It’s turning around. A lot of people are helping me and I just can’t thank ‘em enough.

“We still ain’t where we need to be. We was way off, so to hold for third, we’ll take it.”

Five caution flags and one red flag slowed event, all during the first dozen laps.

The incident that brought out the red flag came on a lap-10 restart when a scramble near the front of the pack sent Zack Mitchell of Enoree, S.C., sideways in turn one, triggering a massive multi-car pileup. Among those swept up was eventual fifth-place finisher Erwin, Dustin Mitchell, Austin Hubbard, Anthony Sanders, Brett Hamm and Jonathan Davenport, who drove away from the scene without stopping but struggled to a 12th-place finish.

Notes: Pearson’s previous victory this season came in the April 1 Lucas Oil Series stop at Boyd’s Speedway in Ringgold, Ga. … Pearson dedicated his victory to a local boy who was injured several months ago. “We named that car Christian Lee (after the kid) and he’s here tonight,” he said. … Austin Hubbard of Seaford, Del., recovered from his involvement in the feature’s big wreck and a spin on an ensuing restart to finish ninth driving Lloyd McLellon’s North Carolina-based No. 1A. … World of Outlaws Craftsman Late Model Series rookie contender Donald Bradsher of Burlington, N.C., entered the event after the national tour's weekend doubleheader in Kansas and Oklahoma was postponed early by rain. He was involved in a turn-four tangle on the opening lap of the feature and was credited with a 24th-place finish. ... The event was run over two days, with qualifying and heat races on Friday night. ... The tour made its first of three scheduled stops at Dublin on the 2017 season. Series competitors return on June 24 for a $5,000-to-win event.