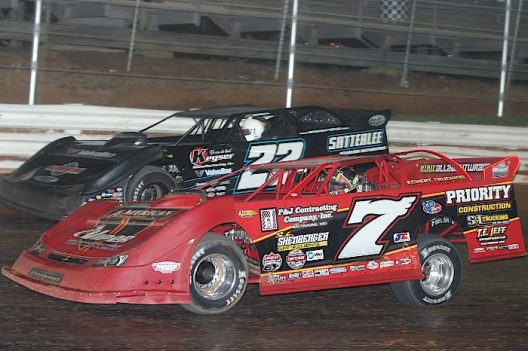 Shortly after the crossed flags were displayed, however, the stars aligned for the 51-year-old veteran, who found the speed necessary to advance from seventh place with 20 laps remaining to the lead on lap 39 with a slide by race-long pacesetter Gregg Satterlee of Indiana, Pa., that propelled him to a $10,000 victory in the national tour’s first-ever visit to the half-mile oval.

“It took me a long time to figure out what my car liked,” said Eckert, who recorded his third career triumph on the Lucas Oil Series but first since July 16, 2005, at Virginia Motor Speedway in Jamaica. “I never did get comfortable into (turn) three, but the racetrack came to my car and I figured out a (turns) one and two line that worked well for me.”

Eckert mastered a final restart on lap 46 to steer his Paul Crowl-owned Longhorn Race Car under the checkered flag 1.510 seconds in front of the 32-year-old Satterlee, who started from the pole position and controlled the event’s first 38 laps in his XR1 Rocket machine. Mason Zeigler, 24, of Chalk Hill, Pa., finished close behind Satterlee in third place behind the wheel of Bryan Klinedinst’s XR1 Rocket, giving home-state drivers a sweep of the podium spots.

Josh Richards of Shinnston, W.Va., placed fourth in the Best Performance Motorsports XR1 Rocket, completing his march forward from the 15th starting spot with a surge from seventh to his ultimate finishing position following a lap-36 restart.

Tim McCreadie of Watertown, N.Y., completed the top five in the Sweeteners Plus Longhorn after running in second place for a majority of the distance. The race’s third starter only briefly lost second to Brandon Sheppard of New Berlin, Ill., following a lap-20 restart — B-Shepp ceded the spot back on lap 29 — before he fell precipitously to fifth when he struggled to fire on a lap-36 restart.

Eckert, who started fifth, emerged victorious in a feature that he thought was out of his reach several times, including on a lap-20 restart following a caution flag for the slow car driven by Colton Flinner of Allison Park, Pa., when he nearly tumbled out of the top 10.

“I run into the 43 (Zeigler) and fell back a couple spots and I was like, ‘We’re done,’” Eckert said. “Then the next restart I got a good start, so you never know. That’s why they race ‘em.”

Indeed, when the green flag flew following a lap-30 caution period for the off-the-pace vehicle piloted by Boom Briggs of Bear Lake, Pa., Eckert suddenly vaulted into the conversation. He immediately moved to fourth place and shortly thereafter, on lap 32, passed Sheppard for third.

After Lucas Oil Series points leader Scott Bloomquist of Mooresburg, Tenn., slowed with blown right-rear tire on lap 36 while running 10th to bring out a caution flag, Eckert made the moves that put him in victory lane. He immediately charged past the slow-starting McCreadie for second engaged in a short-but-spirited battle with Satterlee before gaining command for good on lap 39.

With Satterlee’s line around the extreme outside of the sprawling track gradually fading away, Eckert’s lower groove proved to the hot ticket in the final circuits.

“I couldn’t carry the speed Satterlee and those other could in that top,” Eckert said. “I didn’t even try, and I never could figure out how to drive into (turn) three.

“But I figured out how I could really make time into (turn) one. I had my car to where I didn’t have to run that top … they’d be two car lengths ahead of me when we got there, and I could be all but to their door in the middle of the corner. They kept passing me off (the second turn) until I finally got my right-front tire going. It would take me four, five laps after every caution to get my right-front tire to where I could steer, and then once I could get it to steer I could chug along.”

Eckert chugged right by Satterlee, who was nipped by Eckert for the lead on lap 39 by a mere 0.016 of a second before steadily losing ground.

“We passed each other back-and-forth there a couple times,” Eckert said of his brief tussle with Satterlee. “We were slipping and sliding, changing lanes. It was pretty cool.”

Eckert knew that it wouldn’t be easy to come out on top of a Port Royal duel with Satterlee, who has won four times at the track since 2012, including a ’15 Appalachian Mountain Speedweek triumph over Eckert.

“Boy, I hate coming here to race that guy because every time I’ve ever been here I think he beat me,” Eckert quipped. “He’s really good here.

Satterlee, who is chasing the 2017 Lucas Oil Series Rookie of the Year honors, conceded that he simply couldn’t conjure enough speed running the top of the speedway to hold off Eckert.

“The outside was sort of going away,” Satterlee said. “I just needed to be able to maneuver a little better, not have to go so, so far out there.

“As long as we were staying green I didn’t feel to bad, but I really didn’t get going very good on that (lap-36)  restart. I just needed to be a tick better. I was just a little bit off there at the end of the race. I just couldn’t rotate through the center of the corner like I needed to those last few laps — and the traction I was using, even low up the straightaways, was seeming to be getting drier and doing less for me.”

Satterlee said he hates “to lose ‘em like that” after leading so many laps, but he didn’t hang his head.

“We got a third and a second this week so we can’t complain,” said Satterlee, who backed up his third-place run in Friday night’s Lucas Oil Series event at Sharon Speedway in Hartford, Ohio.

“It was an awesome racetrack,” said Eckert, who registered his fourth career win at Port Royal. “These guys did a great job with the racetrack again. If you wanted to run either wall, the middle … wherever you wanted to run, you could.

“There’s a reason people come back (to Port Royal),” he added. “Not only have they made (the facility) really nice, but they’ve made that racetrack where you can run three and four wide. That’s what people want to see … that’s what I want to do.”

Notes: DirtonDirt.com’s Andy Savary calculated that Eckert went 4,299 days between Lucas Oil Series victories — the longest such span separating wins in tour history. … Bloomquist recovered from his lap-36 tire change to salvage an 11th-place finish that kept him in the Lucas Oil Series points lead by 120 markers over McCreadie. … Sheppard, who started from the outside pole, steadily fell backward after losing third place to Eckert on lap 32. The right-rear tire on his Rocket Chassis house car gave out as he limped to a 12th-place finish. … Earl Pearson Jr. of Jacksonville, Fla., used a provisional to start 23rd in the A-main after he pulled out of the fourth heat due to a turn-two scrape with Chad Hollenbeck of Kingsley, Pa., that damaged knocked his car’s front end down on the right front. He was struck by more bad luck in the feature when he had to pit to change a tire on lap 20, but he rallied to finish ninth. … Steve Francis of Bowling Green, Ky., was running in a transfer spot in the third heat when he blew a left-rear tire with two laps left. He came back to win a B-main, but after climbing nearly into the top 10 in the feature he lost another left-rear tire on lap 46 to bring out the race’s fourth and final caution flag. … Mike Lupfer of Shermansdale, Pa., saw his fourth-heat effort end when he hit the wall between turns three and four. He repaired the mostly bodywork damage and was added to feature field thanks to a track provisional. …  Jason Covert of York Haven, Pa., retired from the third heat after slapping the turn-two wall hard while racing side-by-side with Hudson O’Neal. The damage to the right side of his Cameron-Mann Motorsports car was too significant for him to turn another circuit.