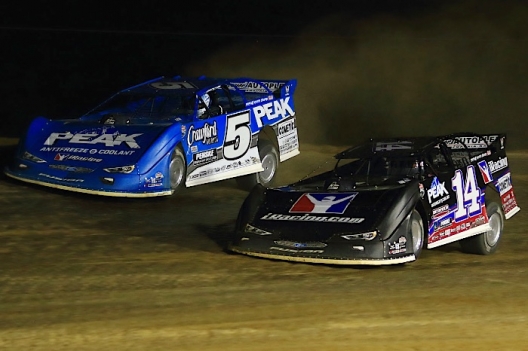 ALMA, Ohio (April 20) — Darrell Lanigan of Union, Ky., led a single lap of Thursday’s Buckeye Spring 50 at Atomic Speedway. But it was the only lap that counted.

Powering ahead of Clint Bowyer Racing teammate Don O’Neal of Martinsville, Ind., in turn two on the 50th lap, the sixth-starting Lanigan won the race to the checkers, scoring his first Lucas Oil Late Model Dirt Series victory of the season for a $10,000 payday.

“We had a good car,” Lanigan said. “For the whole race there we were just kind of biding our time a little bit. We was really, really, really good through the middle there up off the bottom. Lapped traffic helped us out. It slowed that top down a little bit.

“Them guys could get up there and momentum line. It was really hard to pull up beside them down the straightaways. But there that last lap I got (O’Neal) kind of picked in behind that lapped car and snuck in between them and got the win.”

Winning the night’s first heat race to start on the pole of the 50-lapper, O’Neal shot to the lead at the drop of the green flag. As fellow front-row starter Devin Moran of Dresden, Ohio, began closing in on the race leader in lapped traffic, the first yellow flag waved on lap 21, giving O’Neal clean air at the front of the field.

With the race reaching the halfway mark, Lanigan joined the battle up front, challenging O’Neal with roughly a dozen laps remaining. Approaching lapped traffic, the pair raced side-by-side for several laps, with Lanigan pulling ahead in turn two on the final lap, charging ahead of O’Neal down the backstretch to notch his third career Lucas Oil Series victory.

“I was hoping for that lapped traffic to come,” Lanigan said. “It was perfect the way it lined up. It couldn’t have happened any better … It’s awesome to see two teammate cars running up front. I’m sure (car owner) Clint (Bowyer) and Casey are smiling back at the shop.”

O’Neal finished second, with ninth-starting series points leader Scott Bloomquist of Mooresburg, Tenn., advancing six spots to finish third. Moran finished fourth, with 11th-starting Tim McCreadie of Watertown, N.Y., rounding out the top five. The finish was a wild one with Lanigan rubbing past the lapped car of Rod Conley just before the checkers. Conley's car caught the frontstretch fence and then collided with Bloomquist at the flagstand, leaving both cars with significant damage.

While O’Neal was happy for his teammate, he said he wished he could have held on just one lap longer.

“I just wish I could do that last lap over again,” O’Neal said. “It is what it is. Congratulations to Darrell. We come up a little short, but who else would I rather outrun me than my teammate? It was an awesome job by everybody at Bowyer Dirt. We finally got both cars up front and we’re getting better.”

Closing in on the race leaders in the final stages, Bloomquist settled for third at the checkers, making contact with a lapped car as he crossed the finish line.

“I come off there and I didn’t even see him,” Bloomquist said. “I was right under (O’Neal) and then he swerved. I don’t know if he was parked or just barely moving, but it was a little too late to react. I tried to react in time, but at least we didn’t kill the car. We’ve got body panels and it doesn’t look like it knocked the front end out too much.

“I didn’t know how the traffic was going to work out. You just sit there and you get in position and just hope. You really don’t know what’s going to happen. We were just glad that we have enough to catch them. We just needed a longer race."

Notes: Lanigan notched his third career Lucas Oil Series victory, his first of the 2017 season. … Lanigan's previous victory came June 18, 2017, at Magnolia Motor Speedway in Columbus, Miss. ... The 50-lapper was slowed by three cautions. … The first yellow flag waved on lap 21 when Steve Francis slowed in turn four. … Francis slowed on the backstretch to draw another caution on lap 28. … A yellow flag waved for Josh Richards on lap 31 when he slowed with a left-rear flat. … Lucas Oil competitors move to Sharon Speedway on Friday for the second of four weekend events.