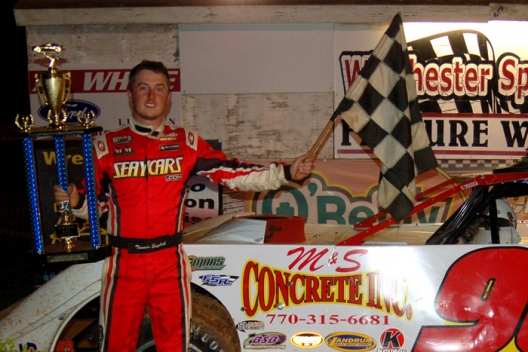 DirtonDirt.com
Tanner English of Benton, Ky., collected $3,000 for his first-ever MARS DIRTcar Series East victory.
What won the race: Tanner English of Benton, Ky., beat his father, Terry, into turn one on the opening lap and then held the elder English at bay for 35 caution-free laps to pick up his first career MARS DIRTcar Series East victory at Winchester (Tenn.) Raceway Park. The victory paid $3,000.
Quotable: "I caught that one lapped car, the (No.) 7 I believe and I couldn't pass him. I knew if I stayed right there, though, I couldn't do anything with them," said Tanner English. "My brother showed my the sign that my lead had shrank and I got back down in the bottom. If it wasn't so dusty and we weren't throwing marbles and crumbs up there I could have rolled it and passed (the lapped cars), but the way it was, you couldn't."
Key notes: MARS East made its first foray into Middle Tennessee with a trip to Winchester Raceway Park. ... Fourteen cars were running at the finish; nine were still on the lead lap. … English continued his hot streak coming off an Ultimate Battle of the Bluegrass Series victory at Brownstown Speedway in Brownstown, Ind., and a third-place finish in the April 2 Lucas Oil series race at Duck River Raceway Park. ... Richard Frost and David Brannon scratched prior to the feature. ... Brannon slid off the track backwards in turn four during his heat race and his car rolled over on its lid, bringing out the red flag. He wasn't injured. ... Frost had mechanical problems and scratched before qualifying. He tried to roll around the infield as the feature started, but wasn't scored. ... Michael Luna broke a driveshaft just as his heat race was set to start. He started the feature in Joe Cline's Crate Late Model. ... Randy Gifford of Flintville, Tenn., won the Limited Late Model feature. ... Cody Ballard won the Crate feature after apparent winner Joe Cline's disqualification.
On the move: Joseph Faulkner of Flintville, Tenn., started 16th and finished 12th.
Winner's sponsors: English’s Rocket Chassis is powered by a Jay Dickens Racing Engine and sponsored by Seay Motors and M&S Concrete.
Points chase: Heading into the weekend, Rodney Sanders of Happy, Texas, was the series points leader.
Car count: 20
Fast qualifier: Terry English
Time: 13.766 seconds
Polesitter: Terry English
Heat race winners: Terry English, Tanner English, Forrest Gifford
Next series race: April 29, Brownstown Speedway (Brownstown, IN) $3,000
Editor's note: Updates with Cline's postrace disqualification in the Crate feature.