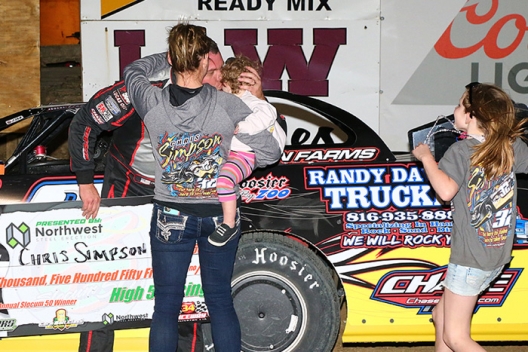 WEST BURLINGTON, Iowa (April 15) — In a season that Chris Simpson of Oxford, Iowa, has started so well, it was only fitting that the richest victory of his Dirt Late Model career came in Saturday night’s ninth annual Slocum 50 at 34 Raceway.

“It’s huge,” Simpson said of his $10,555 win in the memorial event for late Iowa racer Brent Slocum that was co-sanctioned by the Corn Belt Clash and MARS DIRTcar Series West. “Just to be able to come to our home state, an hour-and-a-half away from home, and race for this kind of money …”

No more words were necessary from the very proud Simpson, whose first-ever Slocum 50 win represented his fourth five-figure checkered in Dirt Late Model competition. He was left with an ear-to-ear smile after starting third, passing his polesitting older brother, Chad Simpson of Mount Vernon, Iowa, for the lead on lap two and controlling the remainder of the caution-free distance.

The younger Simpson steered his Longhorn Race Car across the finish line about a half-straightaway ahead of Oakwood, Ill.’s 20-year-old Bobby Pierce, a two-time Slocum 50 winner whose advance from the 11th starting spot culminated on lap 48 when he squeezed past Chad Simpson for second place.

Chad Simpson, 38 settled for a third-place finish in his first start of the 2017 season. Shannon Babb of Moweaqua, Ill., started and finished fourth — though he ran second as late as lap 44 when Pierce overtook him — and outside polesitter Brian Shirley of Chatham, Ill., placed fifth.

While the car count for the event was surprisingly light at 18 entries, “15 of them were cars that could win this race,” Chris Simpson asserted. “None of those guys are slouches.”

Simpson shined brightest among them, finding the right line to maintain solid command.

“I was running that top line and it was smooth, but then when you’d get up beside a lapped car they’d throw some crumbs out and then you’d feel loose,” Simpson said. “I felt really better on the bottom, but I know that momentum around that top was where I needed to be. But we were able to go anywhere (with) a good, maneuverable car.”

Simpson’s sibling drew within several car lengths with under 10 laps to go, but Chris cleared a lapped car better than Chris and was comfortably ahead as Chad spent the final circuits battling for second with Pierce.

“It was fun racing Chad for the lead, battling it out with him,” Chris Simpson said of the race’s early stages. “I was glad that I came out on top, though.”

Chris’s victory was his second of the young 2017 campaign — his previous score came in a March 18 MARS West event at Springfield (Mo.) Raceway — and his sixth top-five finish in nine starts. He already has four runner-up finishes, including three straight during January’s Keyser Manufacturing Wild West Shootout at Arizona Speedway and one on March 24 at La Salle (Ill.) Speedway.

“If it wasn’t for Farmer City weekend (he logged a 10th and a DNQ in the April 1-2 World of Outlaws Craftsman Late Model Series Illini 100 weekend at the Illinois track), we’ve had a helluva start,” Simpson said. “I just gotta thank all my crew guys and all the guys who put in the hard work. I just sit behind there and drive the wheel.

“This thing’s been phenomenal ever since we unloaded it in Arizona. We’re excited about the year, that’s for sure. There’s a lot of big money (races) coming up and we’re excited for sure.”

A one-two Simpson finish was dashed by Pierce, who traded some paint with Chad Simpson while making a pass for second off turn two on lap 48.

“It was a big racing deal,” said Pierce, who raced one night after a triumph at Tri-City Speedway in Pontoon Beach, Ill., gave him his first win since his three-victory Arizona trip in January. “I was pretty mad because (Chad) chopped me off down the backstretch. I did come up with him (off turn two on lap 48), and I said I’m sorry. He’s probably pretty mad about it, but hopefully we can just forget about it. It’s a racing deal … we kind of get hot in the helmet sometimes, and we’re both going for that spot.”

Pierce focused on his run to a second-place finish, which was made more difficult by a heat-race miscue that saddled him with a starting spot deeper in the field than he preferred.

“I’m just glad that we got up to second compared to where we started,” Pierce said. “Falling off the track in that heat race, my dad was pretty mad about that and so was I. I just pushed right off the track, so rebounding from that feels pretty good.”

Chad Simpson, meanwhile, expressed no visible anger with Pierce in a post-race interview with DirtonDirt.com.

“It got a little tight,” Chad Simpson said of his lap-48 scrape with Pierce. “I seen there towards the end I was running Chris down, then I got a couple lapped cars that got me slowed up. Then I could see when I went into one there that one lap, I could see Bobby down there diving on the bottom, but I knew my run on the top would be all right getting down to (turn) three and I figured he was on the bottom.

“I was getting some pretty decent runs early in the night off of (turn) four, so I figured that’s where (Pierce) was coming pretty quick. I tried to move down there and block him a little bit there, but I didn’t have much traction on the bottom of one and two so I had to move myself back to the top … and he wanted the real estate a little worse than I did.”

Despite finishing third, Chad still had reason to smile because his brother defended their Iowa turf.

“It’s good to see him get the win down here and keep this deal in Iowa,” said Chad, who debuted a new Black Diamond Race Car. “I felt like at times we were better than Chris, but he might have been saving his stuff too. He might have been able to turn it up if I got close to him.”

Notes: Chris Simpson’s victory was the second of his career in MARS action and his 10th under the Corn Belt banner. His three previous victories worth $10,000 came in Iowa (2016 wins at West Liberty and Farley) and at Tri-City Speedway (a 2013 UMP DIRTcar Summernationals event). … The race was co-sanctioned by the Corn Belt Clash and the MARS DIRTcar Series West, but it was made a non-points MARS event by that tour’s officials with the weather looking uncertain for long-distance tour travelers after Friday night’s scheduled race at Davenport (Iowa) Speedway was canceled early due to a gloomy forecast. … Dennis Erb Jr. of Carpentersville, Ill., drove a Black Diamond car fielded by Jay Johnson of West Burlington, Iowa, a racer who also sponsors Erb’s self-owned effort. He drove to a quiet seventh-place finish.