Information provided by: Kevin Kovac (last updated April 10, 9:35 am)
Overton runs away with $20,000 VMS checkers
Aaron’s King of the Commonwealth 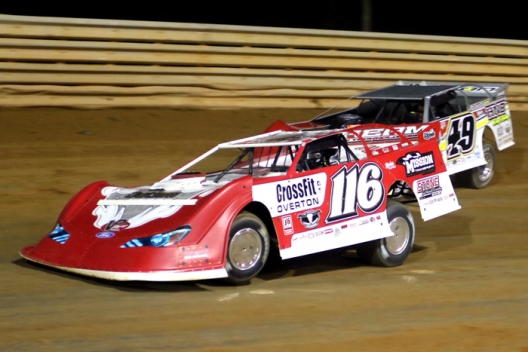 Larry Burnett/wrtspeedwerx.com
Brandon Overton heads for his $20,000 victory at VMS.
What won the race: Brandon Overton of Evans, Ga., outdueled Jonathan Davenport of Blairsville, Ga., to assume command for the lead on lap 28 and then ran away from the field, romping to a full straightaway victory in the 60-lap Aaron's King of the Commonwealth. The 25-year-old driver dominated the race's second half to defeat Dale McDowell of Chickamauga, Ga., by 4.175 seconds for a career-high $20,000 payday.
Key notes: The feature rolled onto the track just after 10:15 p.m. ... Considered a national event for Ultimate BoB competitors, those who chose to participate may use their finish in this race to replace a lower finish in a regional race.
On the move: Third-place finisher Mike Marlar of Winfield, Tenn., officially gained only one position from his fourth starting spot, but he had to rally from the rear after pitting on the second lap.
Winner's sponsors: Overton's Longhorn Chassis is powered by an Andy Durham Racing Engine with sponsorship from A.F. Stone Professional Medical Services, Mission Transport, Stone Land Clearing and Excavating, CrossFit Overton, JRi Shocks, The Bailey Company, Outlaw Racing Southeast and Dream Racing Technologies.
Points chase: Overton extended his series points lead over Mike Marlar through two events.
Car count: 34
Fast qualifier: Chris Madden
Time: 17.580 seconds
Polesitter: Brandon Overton
Heat race winners: Brandon Overton, Jonathan Davenport, Chris Madden, Mike Marlar
Consolation race winners: Dale Hollidge, Nick Davis
Provisional starters: Glenn Elliott, Jason Welshan
Next series race: April 15, Modoc Raceway (Modoc, SC) $5,022
Editor's note: Results and race details are unofficial.
By Kevin Kovac
DirtonDirt.com senior writer

JAMAICA, Va. (April 8) — The pressure was on Brandon Overton when he entered Saturday night’s Aaron’s King of the Commonwealth at Virginia Motor Speedway. After all, his boss, the retired Randy Weaver, won the event’s $20,000 first prize the last time it was run in 2015.

“Oh yeah, I felt it,” Overton said with a laugh after he duplicated Weaver’s achievement with a convincing victory in the 60-lap Ultimate Super Late Model Series-sanctioned feature. “He won this race, so I had to live up to what he did.”

Though Overton, 25, of Evans, Ga., had only raced at Bill Sawyer’s half-mile oval once before, he looked like an experienced veteran there driving the Chip Stone-owned Dream Racing Longhorn Chassis that Crossville, Tenn.’s Weaver vacated last fall after deciding to retire rather than attempt a comeback from a serious concussion he suffered in an April accident.

Using all the guidance that Weaver has provided him since he joined the team late last year, Overton outdueled Jonathan Davenport of Blairsville, Ga., to assume command on lap 28 and then ran away from the field, romping to a full straightaway victory over Dale McDowell of Chickamauga, Ga.

The fast-rising Overton dominated the race’s second half to defeat the 50-year-old McDowell by 4.175 seconds for a career-high $20,000 payday. It was his second triumph this season and his third since taking the reins of the No. 116 that Weaver drove so successfully for several years before his crash.

Mike Marlar of Winfield, Tenn., finished a distant third, rallying from the rear of the field after he pitted on lap two to change a left-rear tire that deflated because its valve stem was cut by an opening-lap scrape with Chris Madden of Gray Court, S.C. Davenport, who started second alongside the polesitting Overton, settled for a fourth-place finish in the Barry Wright house car after leading laps 1 and 9-27 and Madden, who started inside of Marlar in third, salvaged a fifth-place finish despite running virtually the entire distance with his car’s right-rear bodywork crunched from the incidental contact with Marlar.

Austin Hubbard of Seaford, Del., finished sixth after running as high as third and holding a top-five spot throughout the race's first half.

Overton, who turns 26 on April 13, overtook Davenport to lead laps 2-8 before ceding the position back to the 2014 King of the Commonwealth winner. That was fine with Overton, however, because he wanted to run second for at least a little while.

“I knew when I got the lead that I didn’t really want to be leading,” said Overton, who is two-for-two in Ultimate Series action in '17 after previously capturing the season opener on March 4 at North Georgia Speedway in Chatsworth.. “I’ve done got passed so many times when I’ve led the whole race and then got passed on the last lap, or right at the end, and that drives me insane. So when we started racing (for the lead with Davenport during the A-main’s first half), I just kept making sure I was keeping pace with him and not let him get way ahead … I figured if it did rubber (and become one-lane) I could pass him back because I could find (the traction) first since I was second and could search around more.”

Alas, the surface didn’t take rubber, but chasing Davenport did open Overton’s eyes to the groove he needed to utilize to win the race.

“He went up there and showed me how to get in (turn) one really good, and that was the right line,” Overton commented. “In three and four he kind of had to rely on that bottom but I cold just blow off in there and kind of float so I knew I was better than him down there. I just had to wait on him to get cobbled up or do something and then I’d be fine. It all worked out right.

“Jonathan kind of showed me that top, and hell, that worked perfect for me,” he added. “I just kept driving in there hard, and then I would set it, get on my corner and set it up there … and then when I left them crumbs up there, I was pointed straight off the corner.”

Davenport, 33, had no answer once Overton turned up the wick and grabbed the top spot — and shortly thereafter, Davenport fell further, losing second to McDowell on lap a lap-30 restart and third to the charging Marlar on lap 45.

Overton was overjoyed after running away with the checkered flag, which came with neither Weaver nor Stone in attendance.

“I can’t even believe I won, to be honest with you,” said Overton, whose only previous start at VMS was a May 17, 2014, Ultimate event in which he drove Troy Baird’s Club 29 car to a fifth-place finish. “We’ve lost a couple (races) these last couple weeks and we’ve all … not really been down, but we’ve all kind of made it a point that it can’t keep happening, you know what I’m saying? We set a high standard for ourselves, and running the more regional thing, we’ve gotta make the ones that I do run count.

“And this is a good one,” he asserted. “There’s good cars here … Mikey (Marlar), Dale, Madden, Davenport. This one means a lot.”

McDowell hustled forward from the sixth starting spot in his Sweet-Bloomquist car fielded by his brother Shane, but after reaching second place he never was able to offer Overton a serious challenge.

“I was a little tight, so when there was a little bit of traction there and I could charge really hard I was OK,” McDowell said. “Then (the surface) cleaned up for them guys … those guys couldn’t run as hard as I could early, I don’t think, and then they were balanced out a little bit more later —especially Brandon.

“I was just a little tight, so I would have to shear my car with the gas a little bit. I was hoping that caution (on lap 30) wouldn’t come out because when I got to ‘em (Overton and Davenport) the racetrack was more to what we were set up for.”

A runner-up finish wasn’t disappointing, however, for McDowell, whose best finish in his nine VMS starts since 2005 was a third in a 2012 Ultimate event. He owned just one other top-five finish at the track prior to Saturday night.

“A top three’s good,” McDowell said. “This hasn’t been one of my better places. It’s got a lot of wheel-spin and you’ve got to run the car sideways so it really hasn’t fit my driving style the best. I’ve watched these other guys to see what goes fast here so it was definitely an improvement and we’ll keep coming back.

“I like going to those places where I struggle at because it makes me better — if I don’t run out of years first,” he added with a laugh.

“We had a really, really good car,” Marlar said of his Ronnie Delk-owned XR1 Rocket. “I just had to use the tires up getting back to the front.”

Three caution flags slowed the event. The first came on lap two when Kenny Moreland of Waldorf, Md., Darryl Hills of Great Mills, Md., and Glenn Elliott of Sykesville, Md., tangled between turns three and four. Later cautions flew on lap 30 for Dustin Mitchell of Pine Level, N.C., who stopped in turn four, and on lap 43 for teenager Michael Lake of Uniontown, Pa., who clipped the inside wall rounding turns three and four.