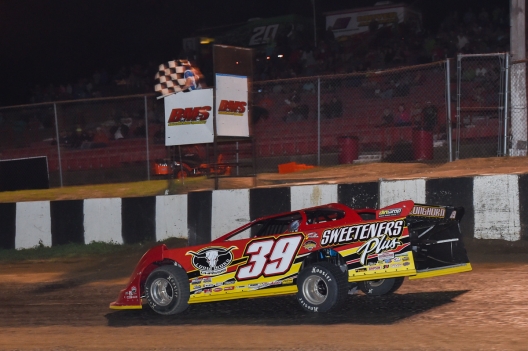 LOCUST GROVE, Ark. (April 8) — To put it simply, it was Tim McCreadie’s night.

Charging to the front of the field at the drop of the green flag, the Watertown, N.Y., driver led wire-to-wire in Saturday’s Bad Boy 98 finale at Batesville Motor Speedway, earning a $20,000 payday in his second Lucas Oil Late Model Dirt Series victory of the season.

“I know this race is not the Batesville Topless, but believe me, it feels just as good to win it,” McCreadie said after climbing to the top of the grandstands for a postrace interview. “I’m a little speed-sensitive. My car feels real good in clean air. I just didn’t know where to be. Thank God I had my crew chief giving me signals, because I got lost for a little while up there, just kind of running the top. This one’s as much for him and all these guys as it was for me.”

While McCreadie set the pace, it was third-starting Jack Sullivan of Greenbrier, Ark., and fifth-starting Darrell Lanigan of Union, Ky., battling for the runner-up spot in the early running. Working his way to the front from the ninth-starting position, Scott Bloomquist joined the mix by lap 20, with the race leaders quickly approaching the tail of the field.

Bloomquist and Lanigan began closing on McCreadie as the trio made their way through lapped traffic, but a series of cautions allowed the Longhorn driver to maintain his position without any serious challenges for the lead.

Using momentum from a mid-race restart, Lanigan set his sights on McCreadie once again, reeling in the race leader around the halfway mark. But luck was not on the Clint Bowyer Racing pilot’s side, as he slowed to draw a caution and retire on lap 66.

Successfully navigating lapped traffic, McCreadie was able to fend off Bloomquist in the late-running. The race’s final yellow flag waved on lap 95, setting up a three-lap shootout to the finish. But it was all McCreadie at the front of the field, as he sailed ahead to take the Batesville checkers.

“You’re always afraid of tire-wear here,” McCreadie said. "But when you see (Darrell) Lanigan or Scott (Bloomquist) behind you or Shannon (Babb) … I know one thing for me personally. If I take it easy, I’m going get beat. So I go out and I give it 110 percent every lap. That might be why I don’t win all the long races. But I just try as hard as I can, because I know if I fall asleep, Scott or one of these guys is going to go by me.”

“I knew it was going to be in the bottom,” Bloomquist said of the race’s final laps. “The track had rubbered up and there was no way anybody needed to try the top or expect it to work that late. The bottom just got so clean and it tractioned up. But we felt like we were pretty good.

"We had our brief hot-lap session and they gave the 10-minute call immediately. Normally there’s a race between our race. We just weren’t quite ready. I had a few more things I really wanted to do and run out of time. But Timmy was good, the racetrack was good. Congratulations to him and we’ll be back for the Topless.”

Making only his fourth feature start of the 2017 season, Babb was pleased with his third-place finish. A two-time Topless 100 winner, he counts Batesville as one of his favorite tracks.

“This place has been really good to us,” Babb said. "The car was good, but 14th, I didn’t know what was going to happen. I hot-lapped and wasn’t that good and went down and threw the screws to it. They blew the horn and I ran out of things to do, so I just went out with what we had. The car was good. The long runs, we were real good. I was really happy with it.”

Jimmy Owens of Newport, Tenn., was Friday’s overall fast qualifier. The two-time Topless 100 champion tripped the clock with a time of 13.9441. Tim McCreadie of Watertown, N.Y., was quickest in his respective time trial group. … Timothy Culp of Prattsville, Ark., experienced engine problems in hot laps, forgoing time trials and scratching for the night. He’s expected to be back in action on Saturday, but did pull out of the pit area during Friday's prelims. … Several drivers are making their first-ever appearance at Batesville this weekend including Josh Richards of Shinnston, W.Va., Gregg Satterlee of Indiana, Pa., Logan Martin of West Plains, Mo., and Ricky Thornton Jr. of Chandler, Ariz. Thornton is also making his first Late Model start since joining the Kansas-based Gressel Racing team earlier this year. … Scheduled to enter Saturday’s Ultimate Super Late Model Series event at Virginia Motor Speedway in Jamaica, Va., this marks the first Lucas Oil Series race Jonathan Davenport of Blairsville, Ga., has missed in two years. … Rocket house car driver Brandon Sheppard of New Berlin, Ill., is piloting his family-owned No. B5 this weekend.

Lucas Oil points leader Scott Bloomquist of Mooresburg, Tenn., enters the weekend as the defending race winner. Shannon Babb of Moweaqua, Ill., the two-time and defending Topless 100 champion, is among other recent Batesville winners expected to be on hand this weekend.

Friday’s program will include Lucas Oil Series time trials and heat races, with consolations and the 98-lap main event set for Saturday. IMCA modifieds and street stocks are among other divisions that will be in action.