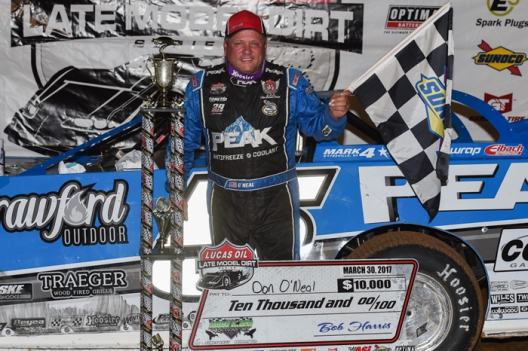 WHEEL, Tenn. (April 2)  — Don O'Neal patiently bided his time, waiting on comers and goers to sort themselves out at the front of the field. Finally, the veteran driver from Martinsville, Ind., had to go.

O'Neal won by a comfortable margin of .642 of a second over Bloomquist in claiming his first Lucas Oil series victory since winning at Roaring Knob Motorsports Complex in Markleysburg, Pa., in April 2015. Tanner English of Benton, Ky., who hung around the top five all night after starting fourth, finished third. Eighth-starting Brandon Overton of Evans, Ga., was fourth, while Dennis Erb Jr. of Carpentersville, Ill., rounded out the top five after starting third.

"Anthony (Burroughs) and Big Snack, man they’ve worked hard on these race cars and it’s paying off,” said O’Neal. “They worked hard over the winter and that’s what’s paying off now. Man, I’m just excited and can’t wait to go to the next race.”

Snapping his nearly two-year-long Lucas Oil series drought was anything but easy. After leadiing the first six laps on the small Tennessee bullring, O'Neal gave way to Culp, who led the next dozen or so circuits.

At one point, O'Neal slipped all the way back to third behind Culp and Erb Jr. But he rallied around the bottom and managed to reclaim the top spot on lap 19. He then had his hands full fending off Bloomquist, who worked himself into contention following a flurry of early cautions.

The final yellow flag fell on lap 31 and set up a seven-lap slugfest between O'Neal, Bloomquist and English. After dispatching English, Bloomquist pulled even with O'Neal on lap 34. After O'Neal ran up the track ever so slightly, Bloomquist forged his way into the lead on lap 36.

“I figured he had a hard tire on with him being out there in the black like that. And when he passed me he went right back to the bottom,” said O’Neal. “I guess he thought maybe he was gonna block my line. So I thought, Well, I’ll try to the same thing he did."

Two laps later, O'Neal mounted a counter assault, retaking the lead with an outside move before diving back to the bottom and pulling away. Bloomquist moved back up the track, but couldn't make up any ground, settling for second.

"We had a soft tire on, but it got rolling out there in the black too," added O'Neal. “When I got back around him, I just made sure I was touching the bottom right in the middle of the corners and just letting it drift out and that seemed to (work) good for us.”

Notes: The event opened Duck River's season. ... Twenty drivers were running at finish. Each was still on the lead lap. … The race was slowed by seven cautions, the last coming on lap 31, setting up the longest green flag run of the race. ... A bevy of yellow flags slowed the race in the early going (five in the first 15 laps), keeping race leaders out of lapped traffic until lap 45. ... Cautions waved for Colton Flinner, who slowed on lap five; Eric Hickerson, who tagged the wall entering turn one on lap eight while running in the top five; Tim McCreadie, who had a driveline failure on lap nine; Flinner for a left rear flat on lap 13; Jonathan Davenport for a right-front flat on lap 15; Caleb Ashby, who spun on lap 16; and Gregg Satterlee, who slowed on the back stretch on lap 31. ... After stopping to change a flat, Davenport rallied from 21st back to 11th. ... Drivers failing to make the feature lineup: Kayne Hickman, Carder Miller, Austin Arnold. ... The Lucas Oil series will return to the Volunteer State two more times this season: May 5 at Tazewell Speedway and July 8 at Smoky Mountain Speedway. ... Christian Hanger of Winchester, Tenn., won the 20-lap companion Limited Late Model feature. ... Jesse Lowe of Crossville, Tenn., completed a weekend hat trick by winning the Crate Late Model feature. Lowe also won at Boyd's Speedway in Ringgold. Ga., on Friday and at I-75 Raceway in Sweetwater, Tenn., on Saturday.