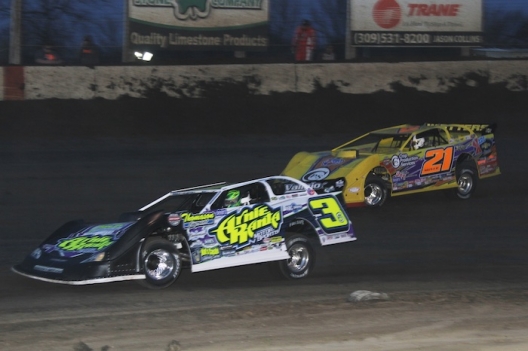 FARMER CITY, Ill. (April 2) — During a winter of tough times for folks close to Brian Shirley, he’d fallen shy of grabbing a victory he could dedicate to those special people. And halfway through Friday’s 25-lapper at Farmer City Raceway, it appeared Shirley was going to fall shy again.

But plugging away in the low groove, the Chatham, Ill., driver caught a trio of lead-running cars, going from fourth to first on the 22nd lap and edging away for a $6,000 World of Outlaws Craftsman Late Model Series victory in wrapping up the Illini 100 weekend.

Shirley’s victory at dusk was the fifth of his career on the national tour but first of the season as he celebrated his 36th birthday in style.

“It's a long season, but I'm happy to get the monkey off the back,” Shirley said after graciously thanking car owners Bob and Lisa Cullen, major sponsor Arnie Ranta, crew members and other sponsors. "You always want to win when you're running a tour, and hopefully, more will come.”

Shirley took the checkers 1.330 seconds ahead of Billy Moyer of Batesville, Ark., who led the first 20 laps but settled for second, barely ahead of Bobby Pierce of Oakwood, Ill., who led the 21st lap but got shuffled back to third a lap later when he slipped over the backstretch banking.

Shannon Babb of Moweaqua, Ill., the third driver who battled Moyer and Pierce for the lead in the second half of the race, slipped back to fifth at the finish behind Chris Madden of Gray Court, S.C., in a thrilling Farmer City finish.

Brandon Sheppard of New Berlin, Ill., the WoO points leader and Saturday’s $15,000 winner in the Illini 100 opener, struggled in prelims and advanced eight positions in the 25-lapper to finish ninth.

Shirley, who duplicated another birthday victory at Farmer City from 2004 — in that weekly event 13 years ago, Babb finished second — made sure to remember friends going through difficult times:

• Long-time racing Illinois buddy Kelly Kovski, who was injured during February’s Florida Speedweeks action at Volusia Speedway Park when he was struck by a sprint car.

• His enthusiastic sponsor Ranta, who has faced cancer in recent years and is still undergoing treatment.

Shirley’s eyes glistened in a victory lane interview when he thought of Kovski, Ranta and Smith.

“It's just emotional for (Smith),” Shirley said. “He came for the first time to the races since losing his boy, so I'd like to dedicate this win to him, and definitely to Arnie Ranta, for what they do for us.”

Shirley’s busy racing weekend kept him from being able to attend a fund-raising benefit for Kovski in Springfield, Ill.

“It was a definitely a bummer that I didn't get to go to Kelly's benefit today ... thinking about him so much, Shirley said. “That was the thing. During Speedweeks, the heartache was tough, and I was just asking the good Lord when I felt like the monkey was gonna get off my back, and people don't realize going through the emotions of your friend getting hurt, a buddy of mine losing his son ... my sponsor, all this is for him.”

Moyer started on the pole and took control from the outset with Babb moving up from his fourth starting spot to challenge early. Pierce, who started outside the front row, got into the mix after a lap-seven restart, and suddenly the multi-time UMP DIRTcar Summernationals champions were battling, sometimes three-wide, toward the closing stages of the race.

All the while the fifth-starting Shirley churned away in the low groove, taking advantage on the key 22nd lap. Pierce had crossed the line first with four laps remaining, but when Moyer slid up exiting turn two, Pierce was briefly shuffled off the racing surface while Babb, just behind him, got a face-shield full of mud in slipping over banking, too.

Shirley took advantage of Pierce’s and Babb’s misfortune, pulled underneath Moyer in turns three and four, and edged Moyer at the line for a lead he’d never give up.

Notes: Sunday’s race was originally scheduled for Friday, but wet grounds after heavy rain forced a two-day postponement. … Shirley’s April 2, 2004, birthday victory at Farmer City came ahead of Shannon Babb, Eric Smith, Jason Feger and Kyle Logue. … Chub Frank retired from Sunday’s race after a single lap; he and Brandon Sheppard got together in turn four on the first circuit. … The 25-lapper's lone caution appeared on the seventh lap when Joey Coulter pulled up and stopped inside turns three and four.