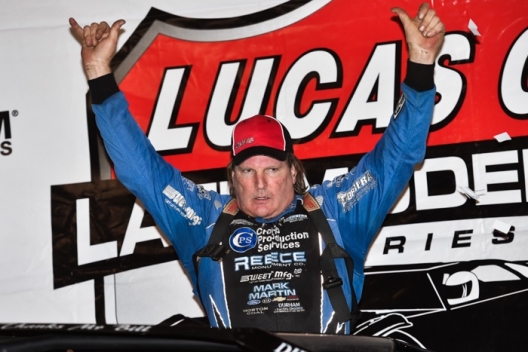 The 53-year-old Hall of Famer from Mooresburg, Tenn., was simply in a league of his own at East Alabama Motor Speedway, racing unchallenged at the front of the pack for the entire 60-lap A-main to pocket $12,000 for his second Lucas Oil Late Model Dirt Series victory of 2017.

Taking advantage of his pole position starting spot, Bloomquist swept into the lead at the initial green flag and never looked back. He built a commanding edge of over 5 seconds during the race before cooling his jets behind slower cars in the final circuits to triumph by a more modest margin of 1.062 seconds over Jimmy Owens of Newport, Tenn.

Bloomquist made the right pre-race calls on his Sweet-Bloomquist car to return to the spotlight at the 3/8-mile oval, a track where he won a record eight National 100s between 1990 and 2003. Moisture that was put down on the speedway by the track-prep crew before the feature added some uncertainty to his strategy, but he handled the change-up with typical aplomb.

“I think it gave us a little more racetrack than the way it was,” Bloomquist said of the track reconditioning. “It probably would’ve rubbered up pretty quick (without the work). Everybody was getting ready I think for a hard (compound) right-rear tire, and just there at the last minute they watered it and I think only three or four cars went out there with a hard tire.

“We were pretty confident we went with the right thing (softer rubber). The car, I could run high, low, anywhere. It’s really tough to have your car set up here where it doesn’t push as slick as it gets, but we had the car pretty good in the heat race and just made a few fine-tune adjustments and the car was great.”

New clay, as well as more banking and a track shaped differently from when Bloomquist enjoyed so much success at EAMS, also provided him the type of challenge he thrives on.

“It’s just always something new when you come here,” said Bloomquist, who recorded his 79th career Lucas Oil Series victory. “It’s definitely a different kind of slick, probably as slippery as anything I’ve ever been on, really. It’s just a high-speed slick because the track’s so banked. It’s a lot of fun … it’s a challenge for a chassis.”

With passing becoming increasingly difficult as the feature wore on — there was just one change in the top-10 running order during the race’s second half — Bloomquist didn’t force the issue when he reached lapped traffic in the closing circuits.

“You could see — you get up on ‘em (the slower cars) and you get the air a little bit off on your car,” said Bloomquist, who grabbed the Lucas Oil Series points lead with his first win since Feb. 17 at East Bay Raceway Park in Gibsonton, Fla. “It definitely makes your handling go away a little bit. That’s why I backed off there at the end. There’s no need trying to pass those guys … you just get yourself in trouble. We had a (big) lead.”

Owens, 44, ran in second place for the race’s final 36 laps and closed in on Bloomquist significantly over the last five tours but never seriously threatened the victor.

“The track just rubbered up there and (Bloomquist) was behind them (lapped) cars,” Owens, who started fifth in his XR1 Rocket, said of the final laps. “He was able to maneuver by them a little bit earlier than I was/ I was a little bit tight through the middle and that just killed my momentum off. Once we were in clean air we had a really, really fast car tonight.

Owens assumed second place for good on lap 24 from Darrell Lanigan of Union, Ky., who slid over the banking in turns three and four and fell to eighth place by the time his got his Clint Bowyer Racing machine back on the racing surface. Lanigan, who started from the outside pole but didn’t reach the runner-up spot until lap 10 when he overtook Pearson, settled for an eighth-place finish.

Jonathan Davenport of Blairsville, Ga., who won last year’s Lucas Oil Series top at EAMS, also was a victim of a slip out of the groove. The race’s sixth starter got high on lap 10, costing him several spots that he couldn’t recover. He finished ninth in the Barry Wright house car.

Josh Richards of Shinnston, W.Va., who entered the event leading the Lucas Oil Series points standings, was never a factor. He started 12th and struggled to move forward, placing a quiet 11th.

Just two caution flags slowed the feature. Jason Hiett of Oxford, Ala., slowed on lap 10 to bring out the first caution and Gregg Satterlee of Indiana, Pa., fell off the pace on lap 15 to trigger the second slowdown.