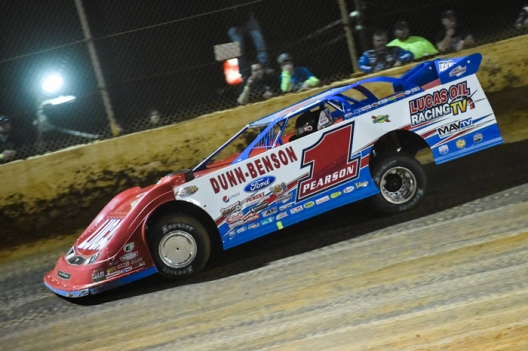 While the four-time tour champion started from the pole position and led the entire distance, he had to survive early pressure from Donald McIntosh of Dawsonville, Ga., a late threat from Josh Richards of Shinnston, W.Va., and a succession of eight caution flags to claim his first Lucas Oil Series triumph since May 15, 2015, at Oshkosh (Wis.) Speedzone Raceway.

“Everybody has been working their rear ends off,” Pearson said of his Dunn-Benson Racing team fielded by the father-and-son combo of Carlton and Kemp Lamm. “It’s been a long-time coming to get back to Lucas Oil victory lane.”

Pearson, 45, pocketed a $10,000 top prize as he snapped a 76-race winless streak on the national circuit, which saw its first action since February’s Georgia-Florida Speedweeks. He drove his brand-new Longhorn Race Car across the finish line 0.926 of a second in front of the 14th-starting Richards, who grabbed second from Jimmy Owens of Newport, Tenn., following the final restart, on lap 39, but couldn’t summon enough speed in his Best Performance Motorsports XR1 Rocket to seriously challenge Pearson.

Owens spent much of the race running second but settled for a third-place finish, the same spot he started. He matched his best outing of the 2017 Lucas Oil season, a show position run in the Feb. 10 opener at Golden Isles Speedway near Brunswick, Ga.

Tim McCreadie of Watertown, N.Y., who won a Schaeffer Oil Southern Nationals Bonus Series event at Boyd’s on March 18, took just 13 laps to hustle from the 13th starting spot to fourth place but climbed no higher and finished in that position. Darrell Lanigan of Union, Ky., who started 15th, completed the top five, gaining two positions over the final 11 circuits.

Defending Lucas Oil Series champion Scott Bloomquist of Mooresburg, Tenn., started and finished sixth, but his race was much more eventful than it would appear at first glance. He had to rally from the rear of the field after spinning on lap 13 when he tangled with Jonathan Davenport of Blairsville, Ga., while battling for sixth place.

Pearson, whose two top-five finishes in seven Georgia-Florida Speedweeks events were topped by a runner-up placing Feb. 13 at East Bay Raceway Park in Gibsonton, Fla., was well aware of the competition he had to turn back to break out of his Lucas Oil Series slump.

“I saw McIntosh early on — it looked like he could run anywhere on the track,” said Pearson, who recorded his 31st career victory on the Lucas Oil Series. “Jimmy (Owens) was good tonight, and Josh (Richards), I know he came from deep in the pack … I was worried about him when he came to the leader board.”

“I just kept my line from the middle to the top,” he added. “They weren’t going to pass me with the line I was running, except maybe on the bottom.”

Richards, 28, was satisfied with his second-place performance after starting at mid-pack in his first-ever appearance at the third-mile Boyd’s oval. He had to sidestep several tangles to log his fifth top-five finish in eight Lucas Oil Series events this season.

“I had never seen this track until I got here today … I had seen maybe 20 seconds of highlights,” Richards said. “I felt like I struggled for the whole race … we must have missed about 14 wrecks out there to get a good finish.”

Owens, meanwhile, thought he might have made a strategic error during the race’s many breaks in action.

“I tried to keep my tires warm under those cautions and that was probably a bad idea,” Owens said. “McIntosh had a good car and I could see him spinning his tires and they were sealing over and Earl’s weren’t.”

The biggest incident of the caution-plagued A-Main occurred on a lap-19 restart when McIntosh, Owens and McCreadie went three-wide for second place through turns three and four and then McIntosh and McCreadie made contact at the bottom of the track. McIntosh executed a 360-degree spin and continued without losing a position, but Don O’Neal of Martinsville, Ind., who was running fifth after reaching third early in the race, and Shanon Buckingham of Morristown, Tenn., crashed together and were eliminated in the wreck that also forced Davenport to the rear of the field.

Another driver knocked from contention by a jingle was Michael Page of Douglasville, Ga., who was bidding for a career-best Lucas Oil Series finish in his Troy Baird-owned car on lap 33 when he tangled with McIntosh. Page slid in front of McIntosh for third place in turn two, but contact between the Georgians caused Page to spin to a stop off the corner. Page then showed his displeasure with McIntosh under caution before retiring to the pit area.

McIntosh continued after the scramble with Page but faded over the remaining circuits, falling to eighth in the final rundown. It was a disappointing result for the young Blount Motorsports driver, who started from the outside pole and was pressuring Pearson for the lead when a caution flag flew on lap 19 for Jason Hiett of Oxford, Ala., setting up the restart scramble with McCreadie that damaged McIntosh’s car for the first time.

Caution flags were also brought out by Derek Ellis of Chatsworth, Ga., who spun on the opening lap and triggered yellow conditions again on lap 30; eighth-starter Mike Marlar of Winfield, Tenn., who twirled on lap one; and Hudson O’Neal of Martinsville, Ind., who stopped on lap 39.