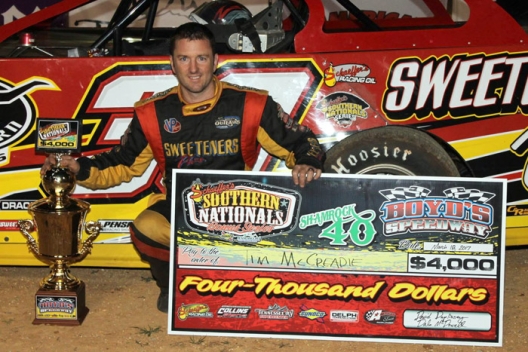 Brian McLeod
Tim McCreadie in victory lane at Boyd's Speedway.
What won the race: Tim McCreadie of Watertown, N.Y., inherited the lead after Brandon Overton of Evans, Ga., slowed with mechanical problems on lap 14 and went on to earn $4,000 Saturday night for his first-ever Schaeffer's Oil Southern Nationals Bonus Series victory in the Shamrock 40.
Quotable: "It was a little trying, the (track) conditions," McCreadie said. "I take my hat off to the speedway and Ray (Cook) and everybody … at least we try to get a race in. I do this for a living, and we had a great Florida (Speedweeks) but then you sit home for three weeks and my paycheck stops coming so we were looking to race. We thought, Man, we need to come to Boyd’s because we struggled here last year. I know these aren’t the normal Boyd’s conditions, but a win’s a win."
Key notes: McCreadie, who started third in the 40-lap feature, was an unexpected entrant. He and his Longhorn house car team made the decision to compete after the weekend's Lucas Oil Series doubleheader in Ohio and Indiana was postponed... The event was slowed by three cautions for slowing cars: on lap 11 for Forrest Gifford; lap 14 for Overton, whose stout No. 116 appeared to sustain suspension damage; and lap 17 for sixth-running Billy Ogle Jr.
Winner's sponsors: McCreadie's Longhorn Chassis has a Pro Power Racing Engine and sponsorship from Sweeteners Plus, Dirt Wrap and Hoosier Racing Tire.
Points chase: Donald McIntosh of Dawsonville, Ga., is the defending series champion.
Car count: 25
Fast qualifier: Brandon Overton
Time: 13.138 seconds
Polesitter: Brandon Overton
Consolation race winners: Dale McDowell, Billy Ogle Jr.
Next series race: May 20, Richmond Raceway (Richmond, KY) $10,000
Editor's note: Results and race details are unofficial.