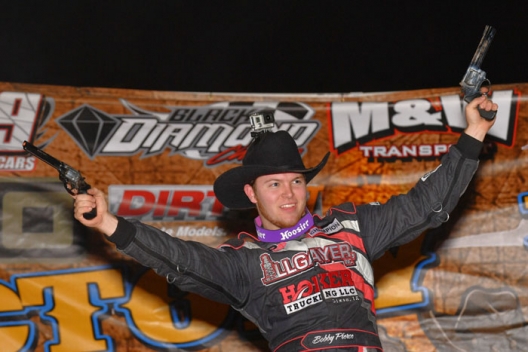 Pierce’s $5,000 triumph moves him to within one victory of a $50,000 bonus from title sponsor Keyser Manufacturing for winning four of six miniseries races. While the Keyser Quarter-Million Challenge’s grand prize of $250,000 for six victories is unattainable, Pierce also has a shot at a $100,000 bonus for five victories if he wins the final two features.

“We’re still eligible for the $100,000, so we’re going try really hard to get it,” Pierce said. “It’s really hard. This field is very tough, especially the more nights we run, the more they figure it out.

“We just gotta try to stay one step ahead if we can, but a lot of it goes into how the track is during the night, you know. Simpson’s been really fast on the bottom, and so has Moyer … and we’ve been really good up top. If we get a track that’s almost equally good top and bottom, that’d be a heckuva race.”

Using the high groove virtually all the way, Pierce took the checkers 1.822 seconds ahead of Chris Simpson of Oxford, Iowa, who finished second for the third straight time in the miniseries.

Moyer settled for third while Garrett Alberson of Las Cruces, N.M., was fourth. Terry Phillips of Springfield, Mo., rallied from his 18th starting spot to rounded out the top five.

Once Pierce got out front, he was only slowed by a few early cautions as he continually pulled away from the field. He had nearly a three-second lead on Simpson at halfway, and while that margin was cut in half when Pierce entered lapped traffic, he stretched it back out again, at one point getting a cushion of four slower cars between his No. 32 and Simpson.

“The bottom (groove) being crumby at the start I think really hurt me,” Simpson said. “It got me by some of those guys … but once that top cleaned up, Bobby could just roll. We’ve seen him do it at Eldora (Speedway), we’ve seen him do it his whole life. So I’m kind of the opposite — I’ve been around that bottom. All in all it’s a good night.

The cautions came first when R.C. Whitwell slowed on the backstretch on the sixth lap and again on the ninth lap for debris in turn two.

Drivers return Saturday afternoon for the fifth round of the miniseries and another $5,000-to-win event with hot laps scheduled for 2:30 p.m. and racing at 4 p.m. (that’s an hour ahead of the original schedule as promoters are hoping to avoid Saturday evening rain). Sunday’s finale pays $12,000-to-win with hot laps at 3:30 p.m. and racing at 5 p.m.

The fourth round of the Keyser Manufacturing Wild West Shootout rolls Friday at Arizona Speedway with miniseries king Billy Moyer of Batesville, Ark., going for his second straight victory.

Moyer won Wednesday’s 30-lap main event to end Bobby Pierce’s chances for Keyser Quarter-Million Challenge after Pierce captured the first two races at the third-mile oval southeast of Phoenix. Pierce, however, still has the opportunity at $100,000 (for five victories) or $50,000 (for four victories) as part of the title sponsor’s bonus program. Moyer also has a shot at the four-victory bonus.

Friday’s event is the fourth of six races over nine days at the third-mile oval southeast of Phoenix.

R.C. Whitwell of Tucson, Ariz., didn't get a qualifying time after his battery went dead in staging. ... Fellow Tucson driver Jake O'Neil, who missed Wednesday's program while waiting on parts to repair a motor, had transmission problems in Friday's time trials and also didn't get a time; his team swapped transmissions before the heat race. ... It appeared Brandon Overton of Evans, Ga., might be done for a week after engine problems with his Don Shaw-owned Billy Moyer Victory Race Car, but chassis builder Karl Performance arranged for Shaw’s team to borrow a powerplant from Moyer. … Fifty-two Late Model drivers have competed so far in the miniseries with three more expected this weekend: former MLRA Rookie of the Year Scott Lewis of Henderson, Colo., modified ace Kyle Strickler of Mooresville, N.C., and Chandler Petty of Cabot, Ark., who is competing in 2017 as a teammate to Garrett Alberson for Haughton, La.-based Childress Racing. … Strickler is driving the No. 46 previously driven by Darren Coffell of Bend, Ore., for his second career Late Model start (he ran two regional touring events in North Carolina in 2012). ... Among drivers done for the week are last year's Knoxville Nationals winner Mike Marlar of Winfield, Tenn., who had mechanical issues two of the three nights he competed. ... Entering Friday, the three modified features have been won by drivers who have also competed in the Late Model division, Dustin Strand of Grand Forks, N.D., and Ricky Thornton Jr. of Chandler, Ariz., who has two modified victories but is out of the Late Model division after crashing his J.R. Haley-owned No. 33x. ... With rain in the forecast for Saturday evening, promoters decided to move racing up one hour to 4 p.m. with hot laps at 2:30 p.m.; racing was originally scheduled for 5 p.m.