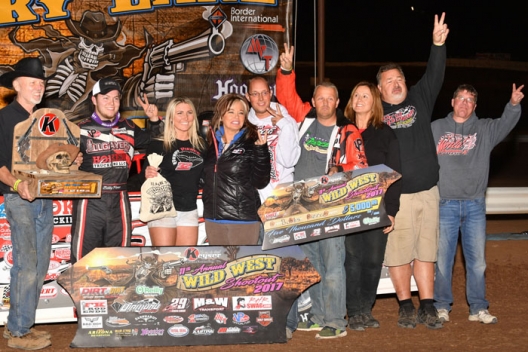 Keeping his hopes alive for the Keyser Quarter-Million Challenge, the polesitter from Oakwood, Ill., took the lead from Brandon Overton on a lap-15 restart and captured the second round of the Keyser Manufacturing Wild West Shootout for his second straight Arizona Speedway victory.

The title sponsor’s bonus pays $250,000 to any driver who can win all six Late Model features of the miniseries. Bonuses are also available for five victories ($100,000) or four victories ($50,000), and Pierce is intent on getting one “if we can stay lucky,” he said.

“I know we’ve got a fast race car … if everything will stay on it. We’ve just gotta stay up front. Drawing the (pole Sunday) and and (outside the front row Saturday) really helped us a lot. Winning those heat races is really key. … if we can keep doing that, we’ve got a really good shot at it.”

Chris Simpson of Oxford, Iowa, finished 2.8 seconds behind in second after a late-race duel with Jimmy Mars of Menomonie, Wis., while Overton, of Evans, Ga., twice found the guardrail in slipping back to finish fourth ahead of Earl Pearson Jr. of Jacksonville, Fla.

Garrett Alberson of Las Cruces, N.M., who led the first 12 laps from outside the front row, struggled in the second half of the race, finishing eighth.

Overton took the lead from Overton with a slide job on a lap-13 restart, and Pierce duplicated the move on the following restart a few laps later and pulled away for his second victory in as many nights.

“The track was really brutal tonight in some spots, but it made for great racing,” Pierce said. “Heck, that one time I fell back to fifth on that one restart, and then down the backstretch got one of ‘em (back), and luckily I think it was (Rodney) Sanders left me enough room to get past him, then I slid (past) Garrett (Alberson). … and then got that caution. I was hoping for that. I needed something to set up Brandon because I don’t know if I would’ve got him on the clean green-flag run.”

Simpson rode the low groove to his second-place finish but never got within striking distance of Pierce.

“Once (the low groove) got cleaned up, I started coming pretty good,” said Simpson, who battled Mars for the runner-up spot in the final laps. “Just looking at lap times there, the last three or four laps I was a tenth or two (of a second) better than Bobby (per lap). I think we’ve definitely got a good car. We’ve got a good balance on the car and you know (we’ll) just keep working and maybe start a little closer (to the front) and get one of these (victories) to take back to Iowa.”

Overton took command before the halfway point with his slide job, but the young Georgia driver briefly got into the turn-two guardrail when Pierce went under him on the next restart. Overton was hanging on to second late in the race when he caught the guardrail exiting turn four, allowing Mars and then Simpson to roll past.

“It’s just a little treacherous up there on that cushion,” said Overton, who substituted for concussion-sidelined Don Shaw of Ham Lake, Minn. “Bobby’s car would just go around there, you know, he could get around there better than I could. I just kept bottoming out when it was choppy. But, all in all, we’ve been up front both days, and just a little bit more tweaking, I think we’ll get ‘em.”

A lap-15 pileup in turn three brought out a red flag and eliminated several drivers after A.J. Diemel and Billy Moyer tangled, triggering a wreck that ended with Justin Duty’s car rolling on top of Diemel’s machine after Duty, Jake O’Neil, Mike Marlar and Bobby Hogge IV slid into the mess. No one was injured.

The feature was also slowed by two cautions, the first for a lap-seven accident for home-track favorite Ricky Thornton Jr. and again on lap 13 when Terry Phillips slowed with a flat right-rear tire.

Thornton, driving the J.R. Haley-owned No. 33x out of Baldwin, Wis., got into the turn-three guardrail while running fourth and collected an onrushing Jason Rauen, eliminating both drivers with significant damage.

The third round of the winter miniseries is scheduled for Wednesday evening with hot laps at 5:30 p.m. and racing at 7 for Super Late Models, modifieds and X-mods. The event wraps up with Friday-Sunday programs capped by a $12,000-to-win Late Model finale.

Notes: Jason Rauen of Farley, Iowa, said the wreck with Thornton bent the frame of his Black Diamond Chassis, ending his desert run. … For the second straight night, the modified winner was also competitor in the Late Model division. Dustin Strand of Grand Forks, N.D., won Sunday’s race while Ricky Thornton Jr. of Chandler, Ariz., won Saturday. … Strand had a flat tire early in the Late Model feature … Three of five Late Model heat races weren’t decided until the final lap. Garrett Alberson won a stirring three-car battle with Earl Pearson Jr. and Billy Moyer in the second heat, while Pierce overtook Rodney Sanders just before the white flag in the third heat. Ricky Thornton Jr. overtook Jason Rauen in a two-lap shootout to the checkers in the fifth heat. … Race teams get two nights off before returning to action Wednesday, but the track is open for practice Tuesday night at a cost of $200 per car.

Bobby Pierce of Oakwood, Ill., is the only driver with a crack at the Keyser Quarter-Million Bonus entering Sunday's second round of the Keyser Manufacturing Wild West Shootout at Arizona Speedway.

The top four finishers in each of five heat races transfer to the 30-lap main event with the winners redrawing for the first two rows of the feature lineup. Two consolation races will transfer two drivers apiece to complete the 24-car field for the feature, which pays $5,000-to-win.

Sunday's event is the second of six races over the next nine days at the third-mile oval southeast of Phoenix.

Editor's note: Updates with change to five heat races instead of six.

Sunday's car count remained the same at 49 with the addition of drivers A.J. Diemel of Elk Mound, Wis., John Brinkley of Prescott, Ariz., and Jon Ortega of Las Cruces, N.M. (who is driving the car his father Rick drove Saturday. … Diemel is back in action after a Friday practice accident and time away to the track to be with his father, who was briefly hospitalized but is OK now. … Missing from Saturday’s entries are Rick Ortega, James Laing of Tucson, Ariz., and Dan Diebel of Lebanon, Ore. … In trying to scale down a program with nearly 140 total race cars, officials tightened up with fewer heats and consolation races. … The Pro Power Racing Engine Dash will be among the top 12 non-qualifying Late Model drivers with the winner getting the option of taking $1,000 or the 25th spot in the starting field.