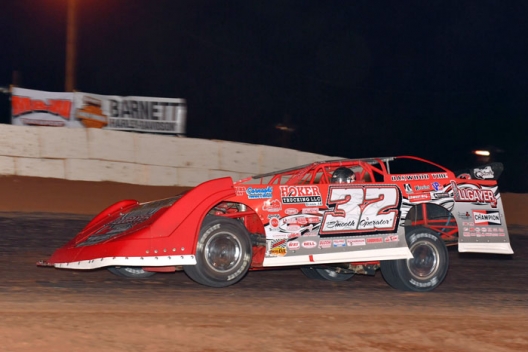 QUEEN CREEK, Ariz. — Bobby Pierce notched his first victory in the desert Southwest while giving himself a shot at a huge paycheck.

Making his racing debut west of the Rockies, the Oakwood, Ill., driver led all the way from outside the front row, riding the preferred high groove early before cruising to a $5,000 victory in Saturday's Keyser Manufacturing Wild West Shootout opener at Arizona Speedway.

The 20-year-old took the checkers 1.989 seconds ahead of runner-up Brandon Overton of Evans, Ga., in the 30-lapper at the third-mile oval.

Chris Simpson of Oxford, Iowa, who took the second spot on a lap-eight restart but gave it up to Overton on a lap-22 restart, was third while home-state favorite Ricky Thornton Jr. of nearby Chandler and Earl Pearson Jr. of Jacksonville, Fla., rounded out the top five.

Polesitter David Breazeale of Four Corners, Miss., held the second spot the first seven laps but got shuffled back on an early restart before settling for sixth.

By virtue of the victory, Pierce stands as the only driver with a chance at the Keyser Quarter-Million Bonus, a $250,000 windfall for a driver sweeping the six-race miniseries. The bonus program also offers $100,000 for a five-victory week or $50,000 for nabbing four of six victories.

“You’ve gotta start up front. These races are only 30 laps — which tonight it felt like a long time leading the whole thing — but if you start in the back it’s going to be a hard time to get up through there in a hurry. But we’ve gotta make sure we stay up front and keep our hopes high.”

While the Midwestern has never won beyond the Rockies, Pierce is coming off a 25-victory season when he became the youngest World 100 winner in history and wrapped up his second straight UMP DIRTcar Summernationals and DIRTcar weekly championships.

One of six heat race winners, Pierce drew the outside front-row starting spot and went right to work from the outset, riding the high-side cushion to pull away from Breazeale in the early laps.

Simpson took second from Breazeale after a yellow but didn’t have much more success keeping up with the red No. 32. By the halfway point, Pierce lead a four-car breakaway with Simpson, Overton and Thornton pulling a half-track ahead of the fifth-running Pearson.

Traffic loomed in the second half of the race and Pierce’s high groove led him safely past several cars before he dove under Garrett Alberson in turn one with eight laps remaining to stretch his lead further.

Another yellow reset the field and gave Pierce clear racetrack on the lap-22 restart, and he deftly pulled away again, this time settling in the middle of the blackening track.

Overton never got within striking distance the rest of the way, but he was pleased with a runner-up finish in substituting in the No. 42s of concussion-sidelined Minnesota driver Don Shaw.

“Yeah, that wasn’t too bad for the first night out,” the 25-year-old Georgian said. “Don brought a good car down here … I’m just glad to be able to come down here and be able to get an early start on everything. First night, we’ll take it.”

Simpson felt like he had a little something for the winner despite slipping back to finish third.

“At times, Bobby really didn’t pull away from me,” Simpson said. “I could kinda stay a little lower and reel him in, but anytime you get him out there with a little bit of a top (groove), it’s going to be tough to beat him …

“A podium finish is a good start to the week, but I’m disappointed, you know? I only want to be in one spot, so we’re going to work hard and we’re going to get there.”

The feature was slowed by two cautions for single-car incidents. Former WWS winner Terry Phillips of Springfield, Mo., slowed on the backstretch on the eighth lap before retiring while Bobby Hogge IV of Salinas, Calif., spun between turns one and two on lap 22.

The six-race miniseries continues Sunday with Round 2 of action featuring another $5,000-to-win event for Super Late Models with modifieds and X-mods on the undercard. Hot laps are scheduled for 3:30 p.m. MST with racing at 5.

Notes: Pierce became the first Illinois driver this century to win a winter Late Model event in Arizona. … He’s the sixth World 100 winner to win at Arizona during that stretch following Billy Moyer, Steve Francis, Jonathan Davenport, Shane Clanton and Jimmy Owens. … A.J. Diemel of Elk Mound, Wis., missed Saturday’s action because of Friday’s wreck and practice and because his father was briefly hospitalized. He plans to compete Sunday. ... Justin Duty of Mulino, Ore., won the Pro Power Dash for non-qualifiers, collecting the $1,000 winner's purse and passing on an opportunity to join his father John in the 30-lap feature.

A busy week of action started Saturday at Arizona Speedway for the first round of the Keyser Manufacturing Wild West Shootout with 48 Late Models part of the winter minitour.

The Late Models are split into six groups for time trials with officials employing combination hot-lap/time trials to set the lineups for six heat races. Drivers start straightup by time.

The top three finishers in each of six heat races transfer to the 30-lap main event with the winners redrawing for the first three rows of the feature lineup. Three consolation races will transfer two drivers apiece to complete the 24-car field for the feature, which pays $5,000-to-win.

A.J. Diemel of Elk Mound, Wis., isn’t in competition. Besides wrecking his car in Friday’s hot laps, his father was taken to the hospital for an unknown medical condition, it was announced at the drivers’ meeting. … Earl Pearson Jr. of Jacksonville, Fla., is among drivers making his first WWS appearance. Moring’s team has multiple winter victories in Arizona with Steve Francis behind the wheel. … The seven Oregon drivers in action are the most at the miniseries in several seasons. … Home-state drivers R.C. Whitwell and Ricky Thornton Jr. are competing in Late Models and modifieds, and Thornton plans to add an X-mod ride on Sunday. ... The Pro Power Dash is scheduled for Jan. 7-8, and 14 among the top 12 drivers who failed to transfer to the feature through consolation races; the winner can pass up $1,000 and opt to tag the field of the main event. ... Besides 49 Late Models, the opener drew 36 modifieds and 45 X-mods.