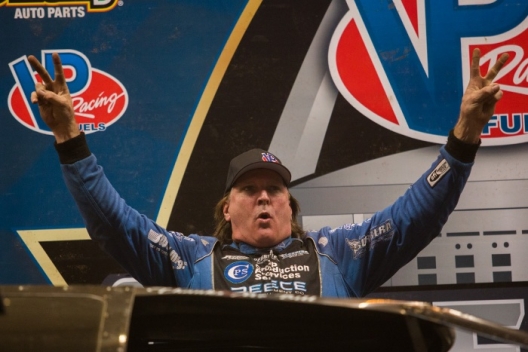 ST. LOUIS, Mo. — Scott Bloomquist let a golden opportunity for an indoor victory slip away Friday night, losing the lead with three laps remaining. The 53-year-old Hall of Famer isn’t one to make the same mistake twice, even if facing rugged racing conditions.

Starting on the pole for the second night in a row at the inaugural VP Racing Fuels Gateway Dirt Nationals presented by Karl Performance, the Mooresburg, Tenn., driver led all 40 laps at The Dome at America's Center, turning back mid-race challenges from Don O’Neal to capture the $20,000 finale capping the historic weekend of indoor action.

Bloomquist likened guiding his No. 0 to victory like riding “a bucking bull out there — the track’s pretty rough in places,” but he kept a tight enough handle on it while keeping O’Neal in check on the temporary fifth-mile oval.

Bloomquist took the checkers 1.328 seconds ahead of O’Neal, the Martinsville, Ind., driver who ran second virtually all the way after starting fifth.

“We could get away a little bit, but I didn’t want to push it too hard,” Bloomquist said. “You could see we were leaving the ground quite a bit in places, and right where I wanted to turn the car, there was a (rough spot) in the corner, and it would just throw it really hard. It was about as much as abuse as I’ve had in a while.”

Ninth-starting Brandon Sheppard of New Berlin, Ill., fell behind the top two after tagging the turn-one wall on lap 34 but held onto third with 12th-starting Bobby Pierce of Oakwood, Ill., finishing fourth. A surprising Hunter Rasdon of Jonesboro, Ark., rounded out the top five in the 22-car field that quickly shrunk after a spate of early wrecks.

Friday night’s $5,000 winner Shannon Babb of Moweaqua, Ill., who slipped by Bloomquist on the 23rd of 25 laps, was among Saturday's early retirees. Babb started third and ran second in the early laps, but his race ended after three laps when he triggered a turn-one pileup that required brief repairs of the catchfence.

Bloomquist’s flag-to-flag victory put the wraps on the historic St. Louis weekend as he and Babb became the first winners of indoor Dirt Late Model races in 34 years, following the tire tracks of the late Jack Boggs, who won a 1982 event at the Pontiac (Mich.) Silverdome.

Bloomquist gave the Cody Sommer-promoted event a big thumbs up, crediting the track preparation crew led by Kevin Gundaker and leaving him anxious for a second annual Gateway Nationals. “I look forward to ‘em doing it again,” he said.

“It was really phenomenal racing all weekend. I was shocked right off the bat when I saw the outside working for guys in the heats … I’ve seen a lot of bigger racetracks not race as good,” Bloomquist said. “You can really hear the echo, the crowd. It’s nice. It’s real bright. Just the whole feel of the place was fun and enjoyable. The temperature’s was great … it’s awful cold outside, but it’s awful nice in here.”

O’Neal agreed the track surface was “a little choppier than I’d say they want it,” and his car wasn’t agreeable in his attempts to overtake Bloomquist.

“I was so tight, it was hard for me to run up in the chop (and) get up a little higher,” O’Neal said. “So I sort of just had to stay down low. One time I went high and lost a lot of ground to (Bloomquist). There for a while I thought we had a shot, and then it sort of went away.”

The rash of early wrecks delayed Bloomquist’s domination, but he cruised the first dozen laps until briefly getting sideways exiting turn four to allow O’Neal to close in on the leader with Sheppard just behind and Rasdon running a distant fourth.

Nearing the halfway point, Bloomquist took his time in putting a lap on Feger while O’Neal stayed within striking distance. Bloomquist went by Feger and O’Neal followed on lap 23 — getting a stern bump from the lapped driver — and then nearly pulled alongside Bloomquist while working the track’s lowest line on lap 24.

But the race’s seventh and final caution on lap 25 for Michael Kloos took a flurry of slower cars out of play, giving Bloomquist clear racetrack on the restart.

Bloomquist continued trying to avoid the track’s roughest patches while O’Neal, who hammered the high side early, tried again to make the low groove work. O’Neal eventually faded over the final laps while Sheppard fought off Pierce and Rasdon.

The St. Louis finale was slowed by six early cautions with plenty of beating and banging, including the lap-four tangle in turn one involving Babb, Sheppard, Devin Moran and others.

After the initial start was called back because tail-starting Gordy Gundaker’s car lost fire coming to the green, a lap-two yellow appeared when Feger went around in turn four. Another yellow appeared on the restart when Kevin Weaver tagged the turn-one wall, causing heavy body damage that forced him pitside.

The fourth caution came out on the ensuing restart when Darrell Lanigan and Rasdon ended up spun side-by-side between turns one and two after a scramble, and then Chris Simpson went around on the next restart in an incident that left Kent Robinson sitting in turn one.

Notes: Lively, lights-down driver introductions preceded the 40-lapper. The cars of the 22 starters were parked nose-to-tail ringing the track with the drivers entering to a spotlight from under the turn-two grandstands. … Gordy Gundaker, Jason Feger, Brandon Sheppard and Scott Bloomquist provided the most festive intros, with Bloomquist appearing with a crotch chop last seen after his 2013 Dream victory at Eldora Speedway. … While house lights were in use most of the weekend, the flip was switched on the TV-quality lighting for the main event.

There’s a chance of snow in St. Louis this evening between about 8 o’clock and midnight, raising the possibility of some slick conditions when cars venture outside into the elements to roll along Cole Street before reentering the building for staging if competition is still going on. … Freezing rain during Friday night’s action created some problems outside. Chad Zobrist of Highland, Ill., who finished sixth in Friday’s feature to lock himself into tonight’s A-main, said he “heard that a couple modifieds crashed or something” on the icy road — and more specifically, he said he came close to injuring himself when he ran across the street to fetch some spare parts from his trailer sitting in a nearby parking lot. “I went down on the ice,” Zobrist said. … According to calculations by DirtonDirt.com’s Andy Savary, Shannon Babb’s victory on Friday night snapped his personal 489-day winless drought since his last triumph on Aug. 15, 2015, in the Topless 100. … Friday night’s feature runner-up, Darrell Lanigan, wore a surprisingly big smile despite falling short of a checkered flag. “That was just a lot of fun,” an obviously pumped Lanigan said. “It’s about like (racing on) a go-kart track, when you and your buddies all go and run.” … Friday’s spectacular Dirt Late Model feature action was especially satisfying to one person in the Dome: Tri-City Speedway promoter Kevin Gundaker, who oversaw the construction and preparation of the fifth-mile oval. “After that race I saw Gundaker jumping up and down like he just won $50,000,” Dirt Late Model driver Bob Gardner of Peoria, Ill., said. “He was so damn happy.” … Kent Robinson of Bloomington, Ind., the polesitter in today’s first B-main, had to make some significant repairs to get his machine ready for the final night of competition. Less than one hour before race time his crew was in the process of completing the straightening process of Robinson’s mangled left-side bodywork. … Jay Elliott of Phenix City, Ala., became the second Dirt Late Model flip victim of the weekend in the first C-main when he rolled wildly multiple times into turn three after starting from the pole position. “I got into that wall coming off of (turn) two and got turned,” said Elliott, who was shaken but claimed to be uninjured. “I tried to stay out of the way, but somebody got into me (Brant Kehrer of New Memphis, Ill., had nowhere to go and rammed the left side of Elliott’s sliding car).”