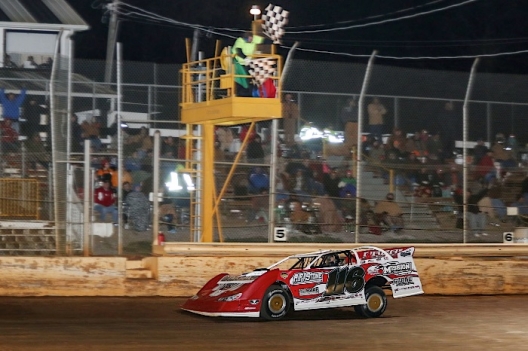 RINGGOLD, Ga. — After winning his first race in his new ride, the Dream Team No. 116, Brandon Overton realized he wasn’t quite ready for his victory lane interview at Boyd’s Speedway.

When it came time to reel off the sponsors on the Chip Stone and Randy Weaver-owned car, Overton had to peek over his shoulder to remember who backed the team to the $10,000 Southern Nationals Bonus Series victory in the 28th annual Gobbler.

“I need to learn the sponsors on it,” Overton said with a smile.

Make that sooner rather than later. While the 25-year-old Evans, Ga., racer has been in the car just three weekends, he’s contended virtually every time and at Boyd’s raced to a career-high payday by outrunning Chris Madden of Gray Court, S.C., at the third-mile oval on the Tennessee-Georgia border.

“That was fun. That was a helluva race car,” said Overton, who notched his fourth victory of the season overall. “I can’t think Chip Stone and Randy (enough) for giving me the opportunity to drive this thing.

“The last thing (crew member) Vinny (Guliani) told me over there was ‘Win this one for my mom.’ You know his mom passed away last week, so this is for her, and all the guys that help me on this thing, (Grant) Pearl and Josh (Gunter) and Randy, just everybody.”

Overton started fourth in the 24-car field and quickly moved up to challenge Madden in the first half of the race. He made the winning pass on the 20th of 60 laps, then deftly maneuvered through traffic while keeping Madden in check.

Madden finished as the runner-up while Donald McIntosh of Dawsonville, Ga., who led the first four laps and clinched the $5,000 Southern Nationals Bonus Series title, finished third. Track co-owner Dale McDowell, of Chickamauga, Ga., and 11th-starting Jason Hiett of Oxford, Ala., rounded out the top five.

“I don’t want to quit racing now,” Overton cracked in victory lane. “It’s cold, but if we keep winning $10,000 races, I don’t mind it too bad,” Overton said. “(Series promoter) Ray (Cook) and them have a heckuva series and I’m just glad they give us a place to race. Hats off to (Boyd’s co-owners) Dale (McDowell) and David (Duplissey), the racetrack was pretty good all weekend … I’m just glad to be in victory lane in this thing.”

Weaver, the veteran Crossville, Tenn., driver who retired this season after suffering a concussion in a rollover accident, is duly impressed with his replacement.

“He’s just a good kid who reminds me of myself at 25. He’s got a lot of experience for a young age,” Weaver said, recalling the way things fell into place to put Overton in the seat. “We’re going to have a lot of fun with this young kid and kind of transition myself into helping somebody. A lot of people helped me to get here, so maybe I can help him.”

To find even more success with Overton, “we just have to get him a little more comfortable,” Weaver said. “Vinny put a good package together — Josh and Pearl — man, I’m telling you, I’ve got the best crew out here, and that’s why it made my job so easy when I drove. It’s fun now. I can hang out with the guys and stay in the truck and stay warm.”

Madden looked strong after taking the lead from McIntosh on the fifth lap, but he was wary as he saw the track conditions developing in the first half of the race.

“We went wrong on tire, we went soft on tire,” Madden said. “We took off pretty good there and I kind of figured we was in trouble when I seen the red streaks start coming (in the racing surface). But you know, it is what it is.

“We took a gamble. The last few weeks we’ve been putting on hard tires and getting beat. Tonight, we went the other way. … (overall) we had a good car and a good finish.”

McIntosh clinched that title to go along with his Old Man’s Garage Spring Nationals championship and overall points victory among three tours promoted by Cook, giving him $16,212 in points funds monies from Cook.

“I’m so proud of this team,” McIntosh said. “We’ve had a phenomenal year. I can’t think everybody that’s been a part of it (enough). To come home with a top-three (finish) on the last night with the (competition) that was here is really cool.”

Four cautions slowed the feature, all for single-car incidents. A lap-25 yellow flew when Doug Smith spun exiting turn four. Jimmy Owens, who piloted Richard Austin’s No. A19, retired during a lap-36 caution.

Two more yellows appeared in the final six laps, on lap 54 when Ryan King pulled up lame in turn four and on lap 58 when Stacy Boles drew the final caution.

Notes: Overton’s victory was his first on the series … Saturday's feature wrapped up just after 8 p.m. ... The tour saw 10 different winners over its final 10 events. ... With the closure of Cleveland Speedway, the Gobbler moved to Boyd's in 2016..