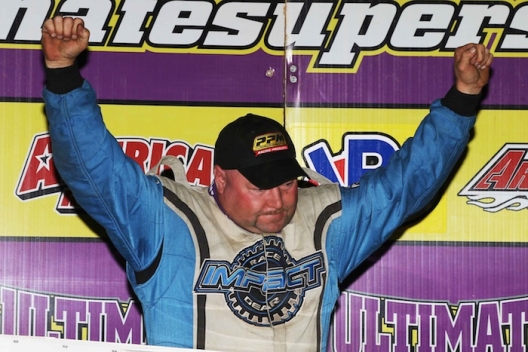 ELM CITY, N.C. — Elm City Furniture was among sponsors for the Ultimate Super Late Model Series event at County Line Raceway, and it was Jackie Boggs of Grayson, Ky., sitting pretty in a recliner Saturday night at the 3/8-mile oval.

The sixth-starting Boggs muscled past Chris Ferguson of Mount Holly, N.C., on the 44th of 50 laps and held on for a $10,000 victory, matching his season high as he captured his first Ultimate-sanctioned event.

Ferguson, who started eighth and grabbed the lead after just five laps, led most of the race before his right-rear tire starting going down, allowing Boggs get underneath on the frontstretch. The frontrunners banged together entering turn one as Boggs took command.

“I didn’t mean to get into (Ferguson) … I couldn’t, it’s just so hard racing when the track’s like, everybody’s all over the racetrack, and the bottom is kind of dominant there toward the end. The middle was great, the top was great earlier in the race. (Ferguson) came up through there good. … I’m just glad we finally got a little luck here.”

Ferguson slipped further back on a lap-45 restart for a spin by Trever Feathers, and then pulled up lame with a flat right rear tire on the second-to-last lap.

Casey Roberts of Toccoa, Ga., who led the first four laps, regained the second spot and finished as the runner-up while Dustin Mitchell of Pine Level, N.C., grabbed fourth. Russell Erwin of Beaverdam, Va., who started alongside Boggs in the third row, finished fourth while Hunter Bailey of Sims, N.C., rounded out the top five finishers. Dennis Franklin of Gaffney, S.C., secured his second Ultimate title in three years with a 13th-place finish.

Boggs credited his extra laps in the preceding modified feature with helping him to victory.

“It just teaches me so much when I race both cars,” said Boggs, who notched his 10th Late Model special event victory of the season. “It’s a lot of work, and it wears you out, but it really teaches you a lot about the racetrack. I think I had a little advantage there.”

Roberts couldn’t keep up with Boggs in the final laps.

“We just went a little hard on tires there. We just got outrun, you know, Jackie won the race there, congratulations for him,” Roberts said in victory lane. “We were going to try to pull it off for Ricky here, Matt’s buddy passed away this week. I’d like to dedicate this run to him. I wish we could’ve got the win there, but it didn’t quite happen. … The year’s winding down. It’s been a pretty good year for us. We’ve got a few more races left, hopefully we can get another win before the year’s out.”

Mitchell was the top home-state finisher in the Race for the Kids.

“I think we were outmotored a little bit, and we kind of slid right there to start with. I had to get my tire going, but we were pretty good around that bottom. I had a few runs at Casey there off (turn) four here, but he’s always run me clean, so I’m going to run him like he runs me,” Mitchell said, adding he was glad to get a strong late-season finish. “It definitely helps out, because we kind of struggled this year. We’re starting to turn things around. We switched out to Longhorns and I think we’re going in the right direction.”

Notes: Ten of 25 starters completed 50 laps. … Polesitter Michael Rouse of Wilson, N.C., spun in turn three in the early laps. … The event wraps up the Ultimate season. The tour is expected to open the 2017 season March 4 at North Georgia Speedway in Chatsworth.