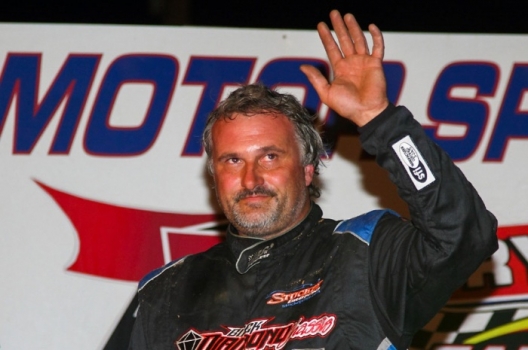 Overtaking the two-time preliminary race winner on the 79th lap of Sunday’s finale, the 12th-starting Erb led the final 22 laps at East Alabama Motor Speedway's 3/8-mile oval for a $20,000 payday in his 14th start at Alabama’s richest dirt race.

"I've been coming down here for a long time, had a lot of good runs here,” the 44-year-old Erb said in victory lane. “Then we've just been working on this car all weekend long here. It didn't start off too good, but we just kept plugging away at it. You couldn't ask for a better car here tonight.”

Erb and McCreadie, who had pocketed a pair of $5,000 preliminary victories Friday and Saturday, agreed that differing tire compound choices played a role in the outcome of Sunday’s long-distance event.

“I was just kind of biding my time there, just trying to hit my marks there,” said Erb, who adds the lucrative National 100 victory his $100,000 Dream XXII triumph in June at Ohio’s Eldora Speedway. “I knew that they said (McCreadie) had a little softer tire on, and I know what I went with, so I was hoping that we just keep getting better the longer the race went on.”

“Yeah, there were only a few things we could do to maybe slow us down, and one was to go different on tires than everybody,” he said. “I don't want to make that as an excuse. Dennis did a hell of a job, but I wish we could have thought better.

“It's always easy to fix your mistakes after the races. I know him and (crew chief) Heather (Lyne) work hard, and they're like me and (one crewman David “Frog” Griepsma) are most of the year by themselves. They've won two of the biggest races, so they're doing something right.”

Overton was right in the mix, too, holding the second spot from laps 56-60 but losing the position to Erb on the final restart.

“That restart there killed us,” Overton said. “I think we might have sealed our right-rear tire up. It started getting black off the back straightaway … that restart was whoever was going to get McCreadie first, and who was going to win. Like I said, a good weekend, and I'm just glad to be here.”

The polesitting McCreadie jumped into the lead from the outset while O’Neal and Shane Clanton traded slide jobs behind him on the fourth lap.

Overton and Erb got digging down low on an early restart and moved into the third and fourth spots while McCreadie stretched his lead over O’Neal to nearly two seconds after 15 laps.

Clanton went from third to fifth on a lap-17 restart but McCreadie went right back to cruise mode in the high groove.

Eight-time race winner Scott Bloomquist restarted sixth on lap 20 and briefly grabbed the second spot before slipping over the turn-four banking a lap later, blunting his charge as McCreadie kept rolling. Bloomquist dropped back out of the top five with Clanton regaining second as McCreadie, unfazed by a smattering of traffic, stretched his leading margin to nearly four seconds by lap 35.

Despite settling in behind the nearly-lapped Casey Roberts, McCreadie’s edge was a steady five seconds at halfway as Erb moved up to second with Overton, O’Neal and Clanton holding positions three through five.

Bloomquist spun alone on the frontstretch on lap 55 to draw the fifth caution — using the opportunity to pit along with Clanton and others — and Overton turned up the wick on the restart to provide McCreadie his first challenge of the race. Overton nearly edged ahead on lap 58 before McCreadie’s high-side momentum kept him in command.

Erb regained second from Overton on lap 61 after a restart, and McCreadie began pushing harder to stay ahead of the pack, which included more than a half-dozen drivers who pitted during mid-race cautions for fresh tires and other changes.

Erb caught McCreadie by lap 70 with Overton joining the fray in a tightening three-way battle for the lead as teammates Lanigan and O’Neal were further back in chasing the top three.

Erb ramped up the pressure on lap 75 when McCreadie lost momentum while trying to put a lap on Dylan Ames, and the frontrunners edged away from Overton. Erb pulled alongside McCreadie in turn two on the 79th lap and completed the pass in turn four.

Once out front, Erb continued his onslaught, pulling away on lap 80 and building a 2.274-second margin on lap 85 with mostly clear racetrack ahead en route to one of his richest career paydays.

The feature was slowed by six cautions, none for serious incidents.

The first yellow appeared when Ames spun in turn two, and two lap-16 cautions appeared when Steven Roberts rolled to a halt atop turn three then spun on the ensuing restart.

Kenny Collins went off the track for a lap-20 yellow, and Joey Armistead headed pitside with rear-end problems.

Bloomquist’s lap-55 spin was followed by another caution five laps later for a slowing Clanton, the final slowdown.

Notes: Dennis Erb Jr.'s best previous National 100 finish was second to Jimmy Owens in 2012. ... He now has seven career top-five finishes in the 100-lapper; he was fourth last year. … Scott Bloomquist was cautioned by series officials for a quick exit from the pits that they said endangered pedestrians. … Casey Roberts spun after contact with Jonathan Davenport as the lap-20 yellow appeared, but he was restored to the ninth spot because the caution. He nearly lost a lap mid-race but ended up sixth. … Austin Smith of Cedartown, Ga., blew his engine winning a consolation race and switched to the car normally driven by — wait for it — Austin Smith of Rome, Ga. Smith had to drop to a tail starting spot and retired after a single lap. … Clint Smith of Senoia, Ga., who competed in four divisions at EAMS, won Sunday afternoon’s opening super street feature. … Jason Hiett of Oxford, Ala., posted top-five finishes in the Late Model Sportsman and Crate Late Model features.