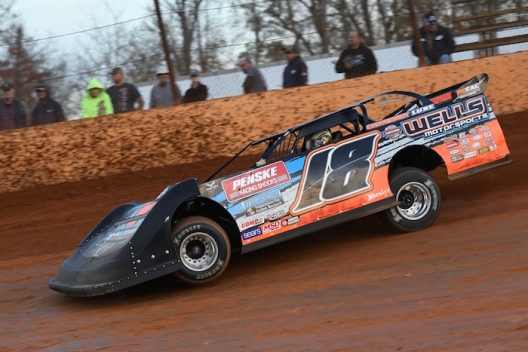 JUNCTION CITY, Ky. (Nov. 5) — Eric Wells of Hazard, Ky., counts Ponderosa Speedway as one of his favorite racetracks. And the reason for that was made clear on Saturday night as he raced to a $10,000 victory in the central Kentucky oval's 26th annual Fall Classic.

Winning the night’s first heat race to start on the pole of the 50-lap feature, Wells charged to the lead at the drop of the green flag, dominating the entire distance for his first career Southern Nationals Bonus Series victory and his second win of the 2016 season.

"The car's been really good all night," Wells said in victory lane. "We hot lapped and it felt really good. We're just really confident right now. We've been running good for the last couple of months. This is my favorite track close to home and I just love racing here. I'm glad we got the win tonight."

Entering lapped traffic on the seventh circuit, Wells and second-running Jason Welshan of Maryville, Tenn., distanced themselves from the remainder of the field in the early running, with the first of three yellow flags waving on lap 18. Maintaining his spot at the front of the field on through the race's restarts, Wells was never seriously challenged for the lead as he picked up his second career Fall Classic victory.

"My team, we've really been busting our butt," Wells said. "We're just having fun. We're having a lot of fun. The car's been good. We made all these changes at the beginning of the year and wasn't running so good. I was a little scared. But I kept my faith with my sponsors and we got it together. I'm glad we got this win."

Using a lap-30 restart to his advantage, fifth-starting Kent Robinson of Bloomington, Ind., grabbed the runner-up spot, with Welshan settling for a third-place finish at the checkers. Donald McIntosh of Dawsonville, Ga., ran fourth, with Steve Francis of Bowling Green, Ky., rounding out the top five.

"(Wells) has been fast all weekend," Robinson said after the race. "Everytime he's been on the track he's been the fastest car here. First and foremost, hats off to him and his whole team. I knew lapped traffic was probably going to have to play in our favor. The car was a lot better; we got better every night. I saw that caution with five to go and I knew he probably had it in the bag. But we raced hard and we'll take second."

Welshan, who improved from Friday's Ponderosa run, was happy to close the weekend doubleheader with a podium finish.

"We struggled there for a while," Welshan said. "We took a little time off and we built this new car. It's a real good piece. Last night we weren't that bad, but we had power steering issues in the heat race. All my guys, they worked their tails off and got this thing fixed and showed them what we could do with it. I'm real excited about racing this car. It's something we can compete with."

Notes: Wells, who finished runner-up in Friday’s Hugh “Junebug” Rowland Memorial, captured his second victory of the 2016 season; his last came in 201 Speedway’s Halloween 50 on Oct. 1. ... The home-state driver has two career Fall Classic victories, his last coming in the 2010 edition of the event. ... The race was slowed by three cautions. … The first yellow flag waved on lap 18 when Justin Rattliff slowed on the racetrack. … Chris Ferguson slowed on the backstretch to draw a caution on lap 30. … A yellow flag flew on lap 45 when Jason Jameson fell off the pace in turn two. ... Top-10 finisher Tim Dohm was the winner of Friday's non-points event. ... Zack Dohm swept the weekend's Crate Late Model events.