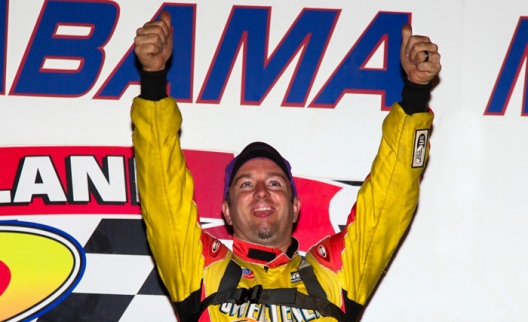 PHENIX CITY, Ala. — Tim McCreadie came to East Alabama Motor Speedway winless in 2016. On Sunday, he’ll start on the pole of the National 100 with a chance at not only collecting $20,000 but earning his third consecutive feature victory.

Brandon Overton of Evans, Ga., who started alongside McCreadie on the front row, led the first nine laps and ended up third while Dennis Erb Jr. of Carpentersville, Ill., and 10th-starting Shane Clanton of Zebulon, Ga., rounded out the top five.

“It's pretty cool. I know that this track is tricky, very tricky and unique to drive … that just makes me happy because it's not all about the biggest motor or maybe the best prepared tires, it's just about finding the part of the track that's clean and entering a little different and working on springs and shocks,” McCreadie said. “That’s a lot of fun on my end. We're on edge. It might not always look like that, but we're on edge out here.”

McCreadie barely kept his edge on O’Neal in a flurry of caution-free action at a track with a new — and slicker — racing surface.

“I thought we was going to get this Peak Cometic Gasket car in victory lane, for a change, but just come up a little bit short. We got a good hot rod and hopefully tomorrow we'll win the big one,” said O’Neal, a 52-year-old driver for Clint Bowyer Racing. “We'll let him have it tonight, and maybe tomorrow night it's my turn.”

While McCreadie cruised on Friday — winning by more than eight seconds after taking the lead at halfway — he couldn’t relax Saturday with O’Neal throwing everything at him over the final 31 laps amid tons of traffic.

O’Neal actually edged ahead on lap 23, but when he slipped over the turn-two banking, McCreadie zipped back past in turn three to retake command.

Entering the final stages, O’Neal again dove under McCreadie in turns one and two on lap 36, but McCreadie held on as three-wide traffic ahead of the frontrunners kept things exciting.

With O’Neal hot on his heels, McCreadie slipped by the slower car of Steven Roberts, sealing off O’Neal and building a cushion of two lapped cars with two laps remaining. O’Neal couldn’t summon and final charge and ended up 1.733 seconds behind at the finish, just ahead of Overton.

Traffic gave both frontrunners fits in the 42-lap showdown.

“All them lapped cars are up there and you just try to show them the nose and hope they see who you are and give you a little respect, which most of them did once they realized who was around them,” McCreadie said. “This Longhorn car's pretty good. We said the same thing last night. It was really good. I didn't feel as good tonight as I did last night, but we'll go to work for 100 (laps). I don't think I can fend off somebody like Don O’Neal like that. … He’s like me. Neither of us had had a win until now and he's driving as hard as he could. We raced each other clean and that was a lot of fun.”

O’Neal got into a scrape with a lapped car on the final lap after a few tense moments with McCreadie.

“I about dropped over the edge here, coming off of (turn) four a time or two,” O’Neal said. “It was a little hairy up there but, other than that, I about took myself out when I got into (Chase Junghans) there, with a lap or so to go. I want to apologize for them for doing that. But all in all, a good night.”

O’Neal was able to maintain momentum in the highest of grooves while McCreadie more frequently dove lower and had trouble regaining speed exiting the corners.

“Yeah, once he slid me a couple times down there (in turns) one and two,” McCreadie said. “I wasn't exiting as good as I was last night. We need to work on some things to get a little bit better, a little more comfortable when I'm in traffic.”

Facing a three-wide traffic late, “Chase (Junghans) was running the bottom there. He saw me and I know (Steven Roberts) didn't really know probably who it was at first,” McCreadie said. “Driving behind him for four or five laps and I figured if I could put somebody between us maybe Don wouldn't get us on the last lap.”

McCreadie survived and is on a two-race winning streak with a North Carolina-based Longhorn Chassis after solid performances the previous weekend at Charlotte’s Bad Boy Off Road World Finals.

“I want to thank Longhorn and all the guys … Sweeteners Plus especially, Pro Power, everything that goes with us. It's been an amazing couple weeks and I really don't want the season to end, but tomorrow will be out last run probably for the year. No matter what happens it's been a success this weekend.”