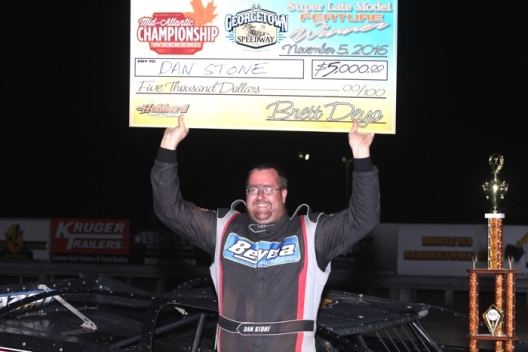 The 38-year-old driver from Thompson, Pa., made a last-minute decision to enter the event pay off — to the tune of a $5,000 check — after he scored a flag-to-flag victory off the pole position in Saturday night’s 40-lap feature.

“The weather was nice so we had to do something this weekend,” smiled Stone, who was accompanied to the half-mile oval by only his father Warren. “We figured we’d come down here and have a good time and we sure did.”

Driving the Super Deuce Racing Lazer Chassis machine owned by Indianapolis, Ind.’s Leo Milus and his wife Spencer, Bryan Barnhill and Kevin Kirby, Stone survived restart challenges from Dale Hollidge of Mechanicsville, Md., and D.J. Troutman of Hyndman, Pa., during the race’s first half and handled lapped traffic with aplomb in the late stages to register his first-ever triumph at Georgetown.

Stone crossed the finish line about a half-straightaway ahead of Seaford, Del.’s Austin Hubbard, who slipped into second place on the final lap when Troutman slowed with a blown right-rear tire. Hollidge also overtook the ailing Troutman on the last circuit to finish third, leaving Troutman to settle for fourth and Shaun Jones of Shermans Dale, Pa., in fifth after starting 14th.

After Stone staved off a lap-six restart threat from Hollidge — when Stone pushed up the track in turn two, Hollidge slid out of the groove and fell to fourth place — the driver known affectionately as Big Brother firmly controlled the action until Troutman made a bid for the top spot on a lap-16 restart. The sixth-starting Troutman, who grabbed second when Hollidge lost traction on lap six, surged ahead of Stone rounding turns one and two, but an immediate caution flag snuffed out the battle.

Troutman, 34, was disappointed to see the caution flag fly as he was attempting to bypass Stone — and with the realization that he probably wouldn’t be able to pull off a similar maneuver again.

“Dan, he’s a good racer,” Troutman said. “I race with him up around Pennsylvania all the time, and I knew once I got him on the restart and the caution came out, he wasn’t gonna let you have two freebies.”

Stone, meanwhile, thought Troutman had actually fired early on the restart and officials were ready to call back the green flag.

“I don’t know if they were gonna let that go,” Stone said. “He was out pretty far ahead, like all the way through (turns) three and four. They even yelled at him on the Raceceiver (one-way radio) after that, so I think they even thought he was a little far ahead on that start.”

There were no more challenges for Stone to deal with, though he certainly didn’t cruise to the checkered flag over the 24-lap stretch of green-flag action that closed the feature. With the track an unusual combination of choppiness and rubber, he had to be careful dealing with slower traffic.

“I was just trying to run my own race and not pass lapped cars and fly out of the place,” said Stone, whose only previous win in 2016 came on June 11 in an Appalachian Mountain Speedweek event at Hagerstown (Md.) Speedway. “(The surface) was pretty rubbered. The whole race, I think the bottom was the dominant groove, and right at the end it was hard to even pass lapped cars. The track was rough too, which you usually don’t see very often — rough and rubber — so that made it a little tough, and the lapped cars were kind of darty too, so I didn’t want to make any moves I didn’t have to.”

Troutman chased Stone throughout the race’s second half but couldn’t mount a serious challenge. Troutman’s tire choice also effectively doomed his chances of making a late-race run at Stone.

“We gambled and put on some softer tires,” said Troutman, who races regularly at Bedford (Pa.) Speedway. “We was definitely softer everybody else on tires and it bit us. At the white flag I blew the (right-rear) tire, and I was like, ‘You know what? I’m running this thing to the end. I’ll try to be conservative and run it around here one more lap.’ Well, Dale Hollidge got into me a little bit (on the backstretch) but that wasn’t his fault at all. I was kind of squirrely and tried to stay out of the way, but it was tough to do that.

“I knew that if the tire wouldn’t have blown out we would’ve ended up second, but we were here and competitive and I’m happy with that.”

The 24-year-old Hubbard, who two weeks earlier was victorious in Delaware International Speedway’s 50-lap Delaware State Dirt Track Championship in is first start since suffering a serious left-ankle injury in a July 7 highway accident, steered his one-race-old XR1 Rocket forward from the eighth starting spot to third place by lap eight. He dogged Troutman throughout the remaining distance before benefitting from Troutman’s last-lap misfortune to finish second.

“I think we were better than (Troutman), but it was tough to pass because it was kind of how you fell through the holes each time,” Hubbard said. “It never seemed like we synched up where he would mess up and we had a good lap. He had a couple bad mess-ups off of two but I would always be in the place not to capitalize, and when I’d get to him he’d be running good again. It was rough and it was a little tough to stay consistent.

“It was just a grind. You had to stay out there and try to keep your nose clean and take advantage of situations that come, and I felt like that’s what we did at the end (when Troutman slowed due to his flat).”

Hollidge, 27, survived a trio of scrapes that could have been disastrous, beginning with the lap-six restart moment with Stone.

“I kind of stayed in the black getting down the (front) straightaway and I had a nose on (Stone) getting into one,” Hollidge, who started from the outside pole, said of the lap-six restart. “We got through the middle and he bounced through a rut and kind of got into my left-front and that knocked me up out of the groove. Luckily we salvaged things because a caution came out not long after that (lap 13).

“Later in the race me and Austin (Hubbard) got together going down the backstretch. He was going right when he bounced through a hole and I was weaving left to get back to the bottom, and we kind of met in the middle and it tore my (left-front) fender flare off.”

“He had a flat there the last lap and when he rolled off the back straightway I seen it laid over, and then when he come back on the track it was still laid over,” said Hollidge, who won an Ultimate Super Late Model Series event at Georgetown in June. “I don’t know if he knew it or not, but it was the last lap, so he had to go for it. Fortunately, we got by him and finished third.”

Notes: Five caution flags slowed the event, all during the first 16 laps. ... Pre-race favorite Ricky Elliott of Seaford, Del., who started fourth, retired on lap six due to a broken lift bar in his car's rearend. ... Glenn Elliott of Sykesville, Md., started third and ran in the top five until clipping an inside marker tire and bending his car’s nose. He slowed on lap 16 to draw a caution flag. … Mark Pettyjohn of Milton, Del., fielded two cars, putting his brother David in his second machine. Mark finished seventh while David was 12th in his first start since escaping a fiery wreck at Delaware International two years ago. …Campbell's Collision added $1,000 to the Super Late Model winner's purse, boosting it to $5,000. ... Brett Ballard won the $2,000 Crate Late Model feature.