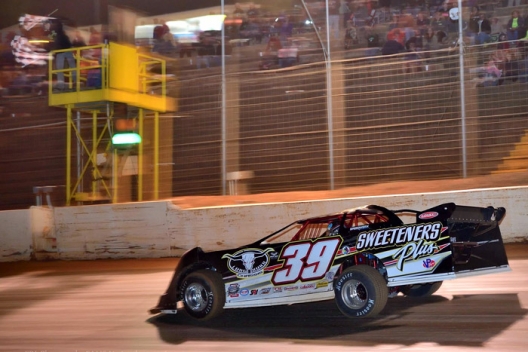 Eric Gano
Tim McCreadie takes the checkers 8.5 seconds ahead of the runner-up.
What won the race: Winning his first feature of 2016, Tim McCreadie of Watertown, N.Y., zipped under race-long leader Jason Hiett at the halfway point of Friday’s 42-lap preliminary feature at East Alabama Motor Speedway and pulled away for a $5,000 victory to open the three-race weekend at the 42nd annual National 100.
Key notes: Weekend action is live via DirtonDirt.com pay-per-view. ... Friday's 42-lap Super Late Model feature kicked off a new expanded three-day weekend for Super Late Models during the season's biggest weekend at EAMS. ... There's another $5,000-to-win feature Saturday and preliminary finishes set up the lineup for Sunday's $20,000-to-win National 100. ... For Friday and Saturday Super Late Model action, the top six qualifiers from each of two qualifying groups are locked into the first six rows of the feature lineup; six drivers apiece from each of two consies fill out the 24-car fields. ... Several other divisions are in action during a busy weekend with all-day racing Saturday and Sunday, including $5,000-to-win events for Late Model Sportsman and Crate Late Models.
Winner's sponsors: McCreadie's Longhorn Chassis has a Pro Power Racing Engine and is sponsored by Sweeteners Plus.
Car count: 38
Fast qualifier: Casey Roberts
Time: 17.608 seconds
Polesitter: Jason Hiett
Consolation race winners: Shane Clanton, Chase Junghans
Editor's note: Results and race details are unofficial.
By Todd Turner
DirtonDirt.com managing editor

The 42-year-old driver from Watertown, N.Y., zipped under race-long leader Jason Hiett at the halfway point of Friday’s 42-lap preliminary feature at East Alabama Motor Speedway and pulled away for a $5,000 victory to open the three-race weekend at the 42nd annual National 100.

The seventh-starting McCreadie grabbed the second spot after a lap-nine caution, stalked Hiett for a dozen laps and took command on lap 22, cruising the rest of the way while hugging the infield at the 3/8-mile oval with a new, slicker surface.

“We've been working on balance all week and changing little things and I got to thank these guys at Longhorn (Chassis),” McCreadie said. “They built one helluva race car. This thing has been hooked ever since we unloaded it a week ago, and like I said, the future looks real bright with this car.”

Dale McDowell of Chickamauga, Ga., roared from his ninth-row starting spot to take second from Hiett on lap 33, but he couldn’t catch McCreadie, who turned a four-second lead into a dominating 8.558-second margin at the checkers.

The polesitting Hiett, of Oxford, Ala., held on for third while ninth-starting Ivedent Lloyd Jr. of Ocala, Fla., was fourth and 14th-starting Chase Junghans of Manhattan, Kan., rallied to finish fifth.

McDowell felt fortunate to score a runner-up finish after a subpar qualifying time.

“Man, we were lucky. We started deep,” McDowell said. “My car's not very good. I just had to hunt traction, so we got our work cut out for us. The race track is awesome. We just need to go to work and get better, but hats off to Timmy. I know he's been working hard.”

Hiett’s higher groove was solid for half the race, but he couldn’t hold off his lower-running pursuers.

“We'd like to win that thing, but I think (opponents’) experience got us a little bit there,” the home-state driver said. “When you're leading, you can't really search around and stuff, so those guys were able to search around. Once McDowell got by me, I finally figured out the groove there. We got a new Barry Wright (Race Car) out. It's actually been really good. I got to thank those guys. Those guys have been working hard all weekend, and we weren't nearly as good as we were to start out with, but we've really picked it up. I feel good about the weekend, and hopefully we can do it again tomorrow.”

McCreadie lapped all but seven competitors, but it was Hiett who took command at the outset with Darrell Lanigan of Union, Ky., in pursuit along with McCreadie, who was running third at a lap-four caution and nearly got too high in turn two on the restart before gathering his No. 39 back up.

McCreadie took advantage of a lap-nine restart to take second from Lanigan while eighth-starting Chris Madden of Gray Court, S.C., roared into contention, running side-by-side with McCreadie briefly while Lanigan began his fade toward a lap-down finish in ninth.

Hiett had a 1.088-second margin on McCreadie on lap 13 as Lloyd dropped Lanigan to fifth a lap later.

McCreadie (and a charging McDowell) made the most of the extreme inside groove and began cutting into Hiett’s lead, crossing the line in a near dead-heat for the top spot on lap 21. Hiett relented on lap 22 as McCreadie took charge and then clicked off the race’s only sub 18-second lap on lap 23 as he began pulling away.

McDowell was cutting into McCreadie’s lead shortly after taking the second spot on lap 33, but McCreadie pulled away over the final half-dozen laps.

The resurfaced oval allowed McCreadie and McDowell to make up ground, but also saw drivers like Lanigan and Madden fade from contention as drivers try to figure out the fastest way around.

“You've got to search around,” said McCreadie, crediting his big-block modified experience for helping him find the winning groove. “You can't really run through the middle to make your time, and this place, it's got a lot of character since they put this dirt on it.

“I'll be honest, I won, but it was a lot of fun last night in practice passing cars, and I've been here a lot where you stay behind the guy that's in front of you for 100 laps, so I think come Saturday, this is going to be a lot of fun for all of us.”

McDowell was impressed of the track’s raciness.

“Good gosh, it was racy, so if it's going to be another night like tomorrow night, we're all going to be scratching our heads, but we just feel fortunate,” he said. “Starting in the back helped me because I can run one of those guys, didn't know where to go or couldn't get to, so I feel fortunate.”

He called the track “icy slick,” which left “some of the guys sliding and beating and banging off each other, but they really can't help it. It just goes along with the race surface, so we all got to go to work and get our cars a little better and maneuver around, and they said Timmy was awfully good at moving around, so we'll go to work, try it again tomorrow night. We had fun tonight, though.”

The feature was slowed by three cautions, none for serious incidents and all over the first nine laps.

The first yellow scrapped the first restart when Scott Bloomquist went around on the backstretch, then Brian Ligon went over the banking for a lap-four yellow. A lap-nine came out for debris.

Super Late Model drivers return to action at 6 p.m. Saturday with another preliminary $5,000-to-win program. Feature and consolation lineups for Sunday’s $20,000-to-win finale will be set by combined finishes from Friday and Saturday’s prelims.

Notes: McCreadie, driving a Longhorn Chassis out of the chassis manufacturer’s North Carolina shop, won his first feature since a World of Outlaws Craftsman Late Model Series victory July 10, 2015, at River Cities Speedway in Grand Forks, N.D. … Brandon Overton of Evans, Ga., qualified ninth in his group Friday, but he had to start on the tail of a consolation race after weighing in 40 pounds light following time trials. Overton, making his first start since being named as the new driver for the Tennessee-based Dream Team No. 116 car, rallied to finish fifth and transfer to the main event. …. Ivedent Lloyd Jr. drew the No. 2 qualifying pill for Friday’s action and the No. 1 pill for Saturday. …. With multiple divisions in action, the National 100 has drawn more than 275 race cars overall with more preliminaries beginning at 10 a.m. Saturday; Super Late Models return to action starting at 6 p.m. Saturday.