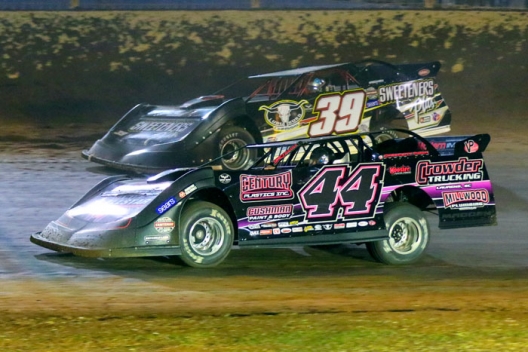 CONCORD, N.C. (Oct. 29) — After finishing in the runner-up spot on Friday night, Chris Madden was a man on a mission entering Saturday's Bad Boy Off Road World Finals finale at The Dirt Track at Charlotte.

Starting on the pole and slipping back to third in the early running, the Gray Court, S.C., driver regained the lead on lap 30 of 50, holding off a charging Tim McCreadie of Watertown, N.Y., in the final circuits to capture a $12,000 World of Outlaws Craftsman Late Model Series victory at the 4/10-mile oval.

“We tightened up from the situation we got in to last night, just trying to have a better car for tonight,” Madden said in victory lane. “We got it too tight tonight and I just couldn’t cut around that bottom like (McCreadie) could. But I found something there in the middle and starting running those guys back down.

“I just kept working that middle, working it, working it and finally got in a grove right there where we could carry a lot of momentum. I knew we weren’t going to have a problem if we didn’t run in to lapped traffic. We did and it broke my momentum, but we made a move down there to put ourselves in a position to win the race."

Rolling off from the second starting spot, McCreadie charged to the front of the field at the drop of the green flag, Madden hot on his tire tracks. As race leaders made their way in to lapped traffic, Madden pulled alongside McCreadie, edging ahead at the line to take the lead on lap 10.

With fifth-starting Josh Richards of Shinnston, W.Va., joining the battle at the front just a few laps later, the trio raced three-wide in turns one and two, with McCreadie pulling ahead to retake the lead on lap 16. Madden slipped back to run third, but the race was far from over.

A lap-23 restart working in his favor, Madden moved back in to the second-place position around the halfway mark, once again setting his sights on McCreadie and the race lead. With another yellow flag waving on lap 29, Madden used the mid-race restart to his advantage, pulling ahead of McCreadie on lap 30 as Richards fell of the pace to draw a caution.

Successfully navigating lapped traffic as the race went back green, Madden fought off late-race challenges from McCreadie, scoring his 12th victory of the 2016 season and his first World of Outlaws triumph since 2012.

“It’s just amazing … all the fans that come out,” Madden said of winning at Charlotte. “I have a lot of fans that support me that don’t get to travel to all the big races that we go to. This great big, huge facility we’ve got here, this awesome crowd, the awesome people that put this on, we just like to appreciate all of them."

McCreadie finished runner-up, with Don O’Neal of Martinsville, Ind., improving from the seventh-starting position to run third. Ninth-starting Eric Wells of Hazard, Ky., finished fourth, with Brandon Overton of Appling, Ga., rallying from the 20th starting spot to round out the top five.

“I didn’t think that outside would clean up enough and it did,” McCreadie said. “(Madden) led a lot of laps last night and you just don’t know where to be and he got better. I thought maybe there was a chance (late-race), but I tell you, he made a hell of a move between two lapped cars down there. I just got hung for a second and that was the race. He’s helped me out a lot this week. It’s fun to race like that."

While O'Neal was hoping to make his way to Charlotte's victory lane, he said he was pleased with the improvements his team made after failing to qualify for Friday's main event.

“We made some gains," O'Neal said. "We had a rough night last night, but it’s in the past. We had a good hot rod tonight, just wasn’t quite what we wanted here."

Notes: Madden notched his ninth career World of Outlaws victory; his last came a Swainsboro (Ga.) Raceway in May 2012. ... The race was slowed by four cautions. ... The first yellow flag waved on lap 23 when ninth-running Chris Ferguson slowed in turns three and four. … G.R. Smith and Joey Coulter tangled in turn four to draw a caution on lap 25. … A yellow flag flew on lap 29 when Brian Shirley spun in turn two. … Front-runner Josh Richards slowed in turns one and two to draw a caution on lap 30; returning to the tail of the field, he rallied to post a 12th-place finish. ... Richards was crowned the 2016 World of Outlaws champion, clinching an unprecedented fourth career series title. ... Billy Moyer Jr. received the 2016 WoO Rookie of the Year honor.

Polesitter Chase Junghans charged to the front of the field at the drop of the green flag, as a three-car battle ensued for the runner-up spot. As the race reached the halfway mark, Junghans held the point, with Max Blair charging around the top side to make a run for the lead. Junghans won the final consolation, with Blair taking the second and final transfer spot.

Front row starters Brandon Overton and Billy Moyer Jr. battled in the early running, with Jonathan Davenport running in the third-place spot. Overton stretched his lead at the halfway mark, as Davenport began closing in on second-running Moyer Jr. Overton won the consolation, with Davenport slipping under Moyer Jr. on the white flag lap to finish second and transfer to the feature.

With polesitter Johnny Pursley docked two spots for jumping the initial start, second-starting Jordan Yaggy shot to an early lead. A yellow flag waved on the second lap when Robbie Scott slowed in turn four. Using the restart to his advantage, Steve Francis took  over the third-place spot, challenging Pursley for second. Colliding with Francis just shy of the halfway mark, Pursley got turned around in turns one and two, piling up multiple cars. Francis retired to the infield as the race went back green, as Yaggy went on to win the first consolation. Starting on the last row, Frank Heckenast Jr. grabbed the second and final transfer spot.

Polesitter Shane Clanton pulled ahead of Dennis Erb Jr. to take an early lead, as a three-car battle ensued for the third-place spot. As the race reached the halfway mark, the top-three cars of Clanton, Erb and Darrell Lanigan distanced themselves from the rest of the field. A yellow flag flew on lap eight when Brian Ledbetter spun in turns one and two. Maintaining his lead on the restart, Clanton won the sixth heat, with Erb finishing runner-up. Lanigan ran third to transfer to the feature, with multiple cars piling up on the frontstretch as the race took the checkered flag.

Front row starters Dale McDowell and Donny Schatz pulled away from the field in the early running, as Jason Covert and Morgan Bagley battled for the third-place spot. A yellow flag flew on lap three when Covert slowed in turn four. Gaining momentum on the restart, McDowell stretched his lead over the field at the halfway mark, going on to win the fifth heat race. Schatz finished second, with Bagley grabbing the third and final transfer spot.

Edging ahead of fellow front row starter Tim McCreadie, outside polesitter Dale Hollidge led the opening lap, with McCreadie sliding back to the front of the field one circuit later. After running third early, Hudson O’Neal slipped back to eighth, while Rick Eckert challenged Hollidge for the runner-up spot at the halfway mark. McCreadie picked up the heat race win, with Hollidge finishing second. Eckert rounding out the podium in third.

Polesitter Steve Casebolt took an early lead, as Chub Frank and Kyle Bronson battled for the third-place spot, with Bronson sliding ahead and pulling away on lap three. Casebolt lead the entire 10-lap distance, with Eric Wells improving one spot to finish second. Bronson held off a charging Brandon Overton to grab the third and final transfer spot.

Polesitter Chris Madden charged to the lead on the opening lap, with a yellow flag waving for a turn-three tangle involving Justin Williams and Chad Hollenbeck. Shooting to the inside of racetrack, G.R. Smith pulled alongside Madden as the race went green, but fell short as he slipped back to the third-place position. Distancing himself from the field, Madden won the second heat, with Chris Ferguson holding off Smith to finish runner-up. Running third, Smith transfers to the feature.

A yellow flag waved as the field took the green flag for a frontstretch tangle involving Frank Hecknast Jr. and Steven Roberts. Polesitter Josh Richards stretched his lead as the race went green, with Steve Francis slowing in turn two to draw a caution on the third lap. Richards held his lead on the restart, as Johnny Pursley and Frank Heckenast Jr. battled for the final transfer spot. Making contact with the infield tire, Heckenast spun in turns three and four to draw a caution on lap eight. Richards picked up the heat race win, with outside polesitter Don O’Neal running second. Roberts edged ahead of Pursley at the line to finish third and transfer to the feature.

The World Finals conclude on an absolutely gorgeous day with conditions that feel more like summer than fall. Crystal-clear skies and temperatures in the low 80s have prevailed throughout the afternoon, and the usual chilly World Finals evenings aren’t in play as temps are expected to stay above 60. … The only new scratch from competition is Ross Bailes of Clover, S.C., who had to bypass Saturday night’s action to attend a wedding. … Willie Milliken of Roanoke Rapids, N.C., was forced to park his Longhorn No. 1M after slapping the wall hard during Friday evening’s heat racing. He’s entered in Saturday’s show driving the No. 8 machine usually campaigned by his car owner Mason Price. … Entering this evening’s final WoO points race of 2016, the top five drivers in the standings — Josh Richards of Shinnston, W.Va., Shane Clanton of Zebulon, Ga., Rick Eckert of York, Pa., Brandon Overton of Evans, Ga., and Billy Moyer Jr. of Batesville, Ark. — are locked into their spots. Just 38 points, however, separates the drivers sitting 6-9 in the standings — Steve Casebolt of Richmond, Ind., Chub Frank of Bear Lake, Pa., Brian Shirley of Chatham, Ill., and Eric Wells of Hazard, Ky. — so some significant shuffling is still possible.

The 10th annual Bad Boy Off Road World Finals wraps up on Saturday at The Dirt Track at Charlotte with the second of two $12,000-to-win World of Outlaws Craftsman Late Model Series events. After capturing Friday’s feature, Josh Richards of Shinnston, W.Va., broke the tour’s single-season win record, notching 18 victories on the year.

Saturday’s heat race lineups were determined by Thursday’s second round of time trials. Clocking the overall fast time for the night’s program, Richards will start on the pole of the first heat race. The top three cars from each of the evening’s six preliminaries will transfer to the main event.

The remainder of Saturday’s feature field will be set through consolations and series provisionals. The program will also include WoO Sprints and big-block modifieds. DirtonDirt.com is offering live pay-per-view coverage of the event.