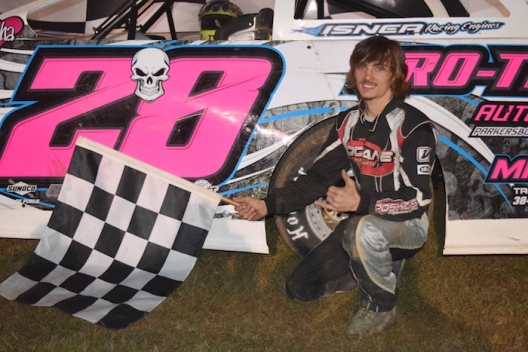 Charging to the top spot at the drop of the green flag, the Parkersburg, W.Va., driver led from flag-to-flag, capturing a career-high $10,059 payday in the race honoring the late central Kentucky driver for which it is named.

“This is the biggest race of my whole career right here,” Carpenter said in victory lane. “I just came on a gamble. I didn’t know. I just heard it was a little, short paperclip, the style of tracks I like. A couple of guys I knew said, ‘You need to go down there and try it. I’m telling you, you can take that thing home,’ and I was like, ‘Everyone talks up a big race.’ But when it comes down to it, you’ve got to think realistic about it. And I’ll tell you what, it’s realistic.”

Winning the night’s first heat race to start on the pole of the 59-lap feature, Carpenter was never seriously challenged for the lead. Fellow front-row starter Billy Moyer Jr. of Batesville, Ark., was able to reel in the race leader through early lapped traffic, but it wouldn’t be enough as Carpenter went on to bag his second special event victory of the weekend.

“Kryptonite Race Cars is a family-owned business,” Carpenter said. "We may not have a building that looks like Rocket or Barry Wright, but I tell you what, appearance doesn’t mean anything. This right here is what means everything.”

Looking to make a move to the front of the field, Moyer Jr. attempted to work the top side of the track through the racing’s running. He praised English for his clean driving.

“I seen it was the No. 96 on the board and I knew he wouldn’t rough me up,” Moyer Jr. said. "I was trying to inch out and see if something was out there and he could have probably rubbed on me and leaned on me, but I appreciate him and have got a lot of respect for him. Good job to him also.”

English, who made just his second-ever visit to the central Kentucky oval, was happy to come away with a podium finish.

“We’re happy with this run,” English said. “To come here, this being the second time I’ve ever came here, and run like that, it’s a big confidence booster, especially in this kind of condition. It kind of got one-lane in the feature and we had to play bumper cars, but other than that, I’m pleased with it."

Notes: Carpenter swept his two-race weekend, winning Friday's Harvest 50 at Skyline Speedway. ... The race was slowed by two cautions. ... The first yellow flag waved on lap 18 when Chris Ruble slowed on the backstretch. ... Josh Rice drew a caution on lap 29 when he slowed with front-end damage. ... Greg Johnson was the winner of last week's $2,000-to-win Finn Watson Memorial makeup feature.