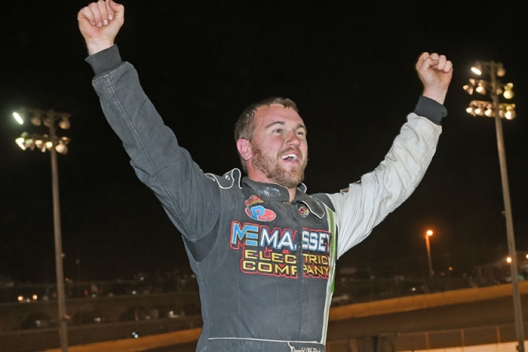 CROSSVILLE, Tenn. — Winning his first race since June, Donald McIntosh of Dawsonville, Ga., led all 60 laps of Saturday’s Tennessee State Championship at Crossville Speedway for a $10,000 victory on the Southern Nationals Bonus Series.

The driver for Maryville, Tenn.-based Blount Motorsports picked up his richest career payday in fending off occasional challenges from Chris Madden of Gray Court, S.C., at the third-mile Cumberland Plateau oval.

“It was a bit one-laned, but I can’t thank these guys enough,” said McIntosh, whose previous victory came June 18. “We’ve been a bit off lately, but we’ve been trying hard and working hard to find something. I think we’ve found something. I can’t thank (crew chief) David Bryant, (team owner) Larry Garner, Vic Hill Racing Engines, Rocket Chassis, everybody that helps us.

McIntosh took the checkers comfortably ahead of runner-up Vic Hill of Mosheim, Tenn., in a race where tire wear was an issue in the late stages. Madden ran in the second spot for 57 laps before his right-rear tire wore out and Brandon Overton of Appling, Ga., gave up the third spot with tire issues on lap 47.

McIntosh stayed in command most of the way but had a couple of scares in a race slowed by eight cautions, most of them for single-car incidents.

In the early stages while lapping backmarkers, McIntosh struggled to get past Ricky Tinch and Madden pulled briefly alongside in turn two, but the leader stayed in control

Then on lap 32, as McIntosh was trying to put a lap on Doug Smith, Smith’s car got sideways exiting turn two, holding up McIntosh as Madden zipped around the outside. But a caution appeared for Kenny Cobble’s frontstretch spin, resetting McIntosh as the leader.

From then on, McIntosh wasn’t seriously challenged while Hill and Cook slid into podium positions with the departures of Overton and Madden late in the race.

“It’s 1-2-3 Vic Hill Race Engines which is pretty good tonight, Ray and I and Donald, congratulations to them,” said Hill, who drove a John Tweed-owned entry. “I knew about halfway through the race on a couple of those restarts, it had already rubbered up pretty hard. You’d race hard a couple of laps, but I knew we were going to have some tire issues if you really was aggressive.

“The last 10 or 15 laps it was kind of just defense to make sure I didn’t blow a tire. It kind of surprised me I saw Chris blow one … he wasn’t really abusing it didn’t look like, none of us were. We were just trying to get a finish without blowing a tire after seeing four or five guys do it.”

Cook, fielding his No. 53 for car owner Stacy Boles, posted his first top-five finish since June 11.

“We had a really good car last night in the heat races, and I think it’d have been good tonight if it have been a slick racetrack,” Cook said. “I haven’t gotten to race a lot. I’m just happy to be up here.”

The most serious of eight cautions appeared on a lap-32 restart when a Billy Ogle Jr.-Ronnie Johnson tangle triggered a turn-three pileup that also collected Robby Moses.